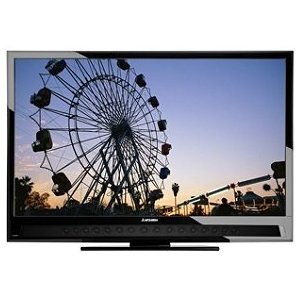 We’ve got another one of those sweet Mitsubishis to look at today with the Polk Audio augmentation, and it will prove just a bit better–and just a bit pricier–than its earlier counterpart.  Today we’re talking about the Mitsubishi LT46164POLKKIT.

The Mitsubishi LT46164POLKKIT is a forty six inch LED television that offers both Deep Color and x.v. Color, Internet connectivity for easy access to a variety of online content providers (and there are lots of them out there), several video modes to change conditions according to need, a thirty-two watt speaker system comprised of sixteen separate speakers with Dolby Digital 5.1 processor, DeepField Imager for dark area enhancement, the Level Sound dynamics limiter to keep commercials from overwhelming the volume, Bluetooth connectivity, four HDMI ports, two component / composite video inputs, a center channel input, a stereo audio output, a variable subwoofer output, an optical digital audio output, a USB port, a Polk Audio eight inch wireless subwoofer and a down-firing J-port.

The sound quality is pretty much the high point of the experience, which isn’t really a surprise with the Polk Audio name involved and all, and the video is actually just a bit better than its predecessor, owing to the slightly larger amount of screen real estate involved. It’s a very nice experience overall.

And as you’ll expect, a slightly higher price tag too–this one weighs in at twenty one hundred even.

But still, if you’re looking for new television and want the sound to be just as good as the picture, the Mitsubishi LT46164POLKKIT is one you’ll want to have a look at.