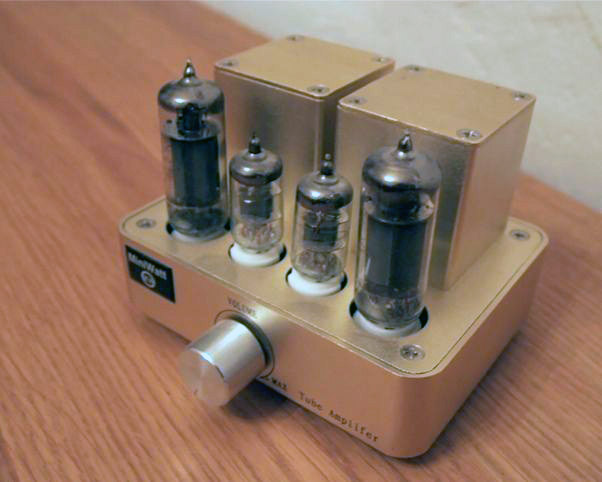 I know I’m more passionate about affordable products then most people. I get both praise and ridicule for my attitude. Obviously as a writer for this magazine I’ve gotten over it from both perspectives. I still never thought I would have a $229 integrated tube amp in my system the big shock though is that I never thought I could enjoy it this much. I honestly thought that all the hype from Audio Circle and other forums was just fluff, I just knew that this little device wouldn’t memorize me as it has all these other audiophiles; well I guess I got fluffed too! It generally isn’t my style to let the cat out of the bag right off the bat, but this is a smoking piece of gear! 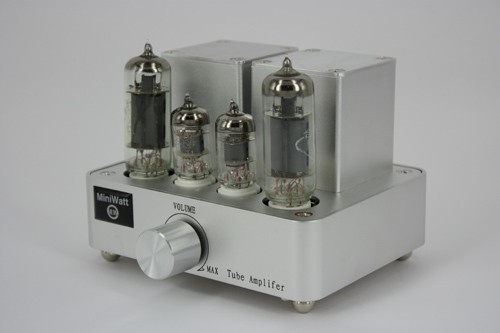 For starters, I’ve never been a huge fan of SET equipment. Not because I didn’t like the sound, but mostly because I always felt like I needed more dynamics and power. I have usually considered about 15-20 watts the bottom of what was listenable with pretty much all of my speakers and the closer to 20 the better I felt. When I told Derek at Miniwatt that most of my listening would be with 93 dB efficient MTM speakers, to my surprise it didn’t scare him off. He welcomed the challenge.

The Miniwatt arrived in record time. Since my day job deals largely with Chinese imports I know how long shipments from the orient can take. This shipment was received in less then four days, with complete tracking from door to door. For those of you who are only accustomed to our US version of the USPS and UPS will find this type of service commonplace but when dealing with other counties shipping systems, I’m telling you the weeks really can drag on. My experience may have been the exception but Derek of Miniwatt was not surprised at the early arrival so I doubt that. However they work it so that their boxes always arrive on time is his own bit of magic, but I still appreciated it.

I know the product is called Miniwatt and surly some of you you have seen the pictures on the web with the amp sitting on top of another amplifier’s transformer; but until you see it in person it is hard to understand exactly how small this amp really is. The measurements are 5” by 4”. It sits perfectly on top of my Logitech Duet Receiver. Unfortunately it blocks the signal just a bit so while they are the only two electronic devices in my system during the review they sat side by side on my Bombay hutch. Even taking up twice the surface area that they could have, they are half the size
of my nOrh ACA2b, which is far less then the standard equipment size.

The Miniwatt arrived in perfect condition with fantastically efficient packaging. The tubes were even installed and ready to go. The only physical peculiarity I found was that the amp uses slots for banana speaker connections instead of 5 way binding posts. These slots make it so that you plug the speaker connections directly in to the bottom of the two transformer covers. This particular quirk will require banana connections on the amp end of your speaker cables though. It just so happens that some of my favorite cables are my Audio Quest CV-4 cables with silver banana terminations on both ends. The amp did not come with any cables, no cheap interconnects or PC quality power cables were provided. Most any one ordering tube audio gear these days has a stash of power and interconnect cables so it isn’t much of an issue, but still worth mentioning.

The cable quandary is a bit on an interesting one; the Miniwatt like most tube amps, especially the more affordable type, is very susceptible to vast improvement with cable changes. At $229 it is quite easy to use several times the purchase price of this piece in a single cable. I admit to falling into this trap myself. While at first I felt a bit guilty about this, I seem to have gotten over it. In my system the best cable combination was a Van Den Hul Mainserver power cable, Van Den Hul’s Second interconnect and the Matching Van Den Hul speaker cables would have probably finished it off quite nicely, unfortunately I only have those with spades so the Audio Quest filled in nicely. As I mentioned above the Miniwatt only allows for the use of Bananna speaker connections. I’m sure I have some adapters somewhere around here but the Audio Quest CV-4 really is a pretty neutral cable that works well with just about any interconnect.

In my own defense I didn’t just dive right in to using such high-end cables with the Miniwatt, I began by using all Audio Quest, the Sidewinders for interconnect and the NRG power cables to somewhat match the CV-4s. Your results will definitely vary with less expensive cables but there was not a combination of cables that was unpleasant with the Miniwatt and I tried several. It was just that I really felt like there was something that I just couldn’t get out of the piece, so I started working my way up the power cable ladder. It took a couple of weeks of moderate satisfaction until I remembered the Van Den Hul Mainserver cables worked so well with almost all tube gear. So I dug them out and it was almost like magic. 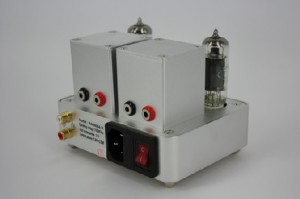 When I first plugged in the Miniwatt I really thought I would be cranking this thing up to the max just to get any volume at all out of it. It turns out that at around 9 O’Clock on the dial is a very comfortable listening level for me. Half way up (12 O’Clock on the dial) is a good rocking volume and much past 3 O’Clock on the dial is uncomfortable. I’m not one of those guys who needs to have their ears bleed to get my audio fix so if that’s you then I hope I’m not breaking your heart when I tell you that even with Lowthers I doubt 2.5 watts would do it for you.

When I first get a piece of equipment for review, just like everyone else I know who get s new piece of equipment, I usually spend my first few listening sessions trying different things to see what works and what doesn’t. I try different bases and various feet, as I mentioned before several cables and any other tweaks I can come up with. To my great surprise all the various platforms and feet had little to no effect on the Miniwatt. It just sounded good, no help needed. Sure they all changed the sound, but mostly not for the better, and nothing made enough difference to stay in the system.

The one thing I played with that did stay in the system was a 12” Dayton Titanic III sub-woofer. I actually enjoyed playing with this in and out of the system. The added power to the lower end really gave the Miniwatt breathing room on the top end. The Sub has a low level pass through so the signal path I chose was the Duet to the sub to the Miniwatt. The added weight to the lower end was greatly appreciated for most listening, making the Miniwatt far more full range friendly. The power of the Miniwatt was sufficient with out the sub, and for most music I didn’t even turn it on. Nothing is without cost, especially in audio. The Sub adds a tad to the dynamics but at the cost of a little of the intimacy that the Miniwatt provides so well. On more powerful classical passages the trade off it worth it, while on more subtle folk music it is far better without the sub. Options are good things, especially when working with audio. I really didn’t look at the sub as anything more then an option to use when needed.

The Miniwatt is very engaging to listen to, it took a bit of effort on my part to disconnect from the music to critically analyze exactly what I was listening too. More the once I put my nOrh and Blue Circle reference system back together to verify what I was hearing. The soundstage was not as deep as the reference combination, but it was plenty wide and I am comparing it to $3000 worth of separates, not exactly fair now is it? I did feel that the imaging was accurate but not exactly pinpoint. It almost feels more musical because of the lack of pin point imaging. It’s hard to explain, but I can sort of feel the mix in a way that surprises me. I asked an old friend who has been a long time SET lover, he just laughed and said it was the SET effect, what ever that means. It really is a magical sound but naming it the SET effect might be a bit much, but we audiophiles are an odd bunch.

This is where I tell you all the things I didn’t like about the Miniwatt. The Miniwatt would just flat not play my 82db Fritz Dynaudio based speakers. I’m sure any speaker under 90db would be a difficulty. Most speakers on the market are in the 88-90db range, so the Miniwatt isn’t going to be for everyone. But if you ever wanted to get your feet wet in the SET pool, this would definitely be an easier hop to make then the leap for a Cary 300SEs. Obviously you get 8 watts and a completely different sound from the 300B tube, but like my buddy said there might just be a SET effect that sucks you in like a tractor beam. I do know that it will be with regret that I send back the Miniwatt, it has been an eye opening experience.