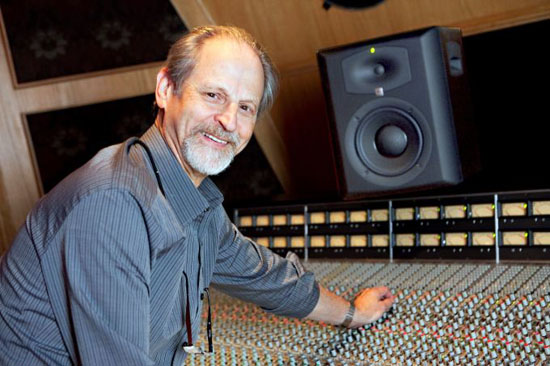 It’s unfortunate that many of today’s engineers are unaware that JBL is a name that at one time was virtually synonymous with studio monitors. In the days before NS10’s became ubiquitous, JBL 4311’s held that same spot in studios worldwide and they pretty much ruled the roost for large soffit-style monitors. But as most things in this business, the tastes of the production community cycle in unpredictable ways, which means that the once mighty JBL name was reduced to an afterthought in most studios for almost a generation.

The last few years though, JBL has made decisive strides technology-wise in an effort to recapture the glory from years past. Starting with the initial release of the LSR series, JBL has proved that it hadn’t forgotten how to make a monitor that engineer’s want to use. Now, with the updated LSR6300 series, JBL has once again taken its place among the elite, thanks to evolving technology that features a new twist.

The LSR6328P is a two-way system with an 8-inch woofer and 1-inch composite diaphragm tweeter. These drivers are biamped with a 250-watt LF amplifier and a 120-watt HF amplifier, which provides, according to JBL, a-flat +1 dB/-1.5 dB response from 50 Hz to 20 kHz, with a low frequency extension all the way down to 36 Hz.

A number of key technological features set this monitor apart from others in its class. First, the 1-inch titanium composite high frequency transducer uses a unique Elliptical Oblate Spheroidal waveguide that provides precise pattern control that, by meeting frequency response criteria for 72 off-axis measurements in what JBL calls “Advanced Linear Spatial Reference design,” provides a flatter-off-axis response for greater clarity at the mix position. This ensures that not just the direct sound, but also the reflected sound that you hear at the listening position is smooth and accurate.

The woofer employs JBL’s “Differential Drive” technology, where it uses two separate drive coils with twice the thermal surface area of traditional speakers, as well as dynamic braking. This enables the 6328’s to provide higher peak output with less power compression, greater heat dissipation, and a flatter impedance curve at higher frequencies. These technologies enable the monitors to sound the same at all volume levels — an extremely important criteria in modern mixing.

The enclosure utilizes a high-density baffle for low resonance with the port on the rear using a design that eliminates port turbulence and reduces port compression. It also has convenient mounting points for mounted installation, plus a set of integrated handles for ease of positioning. The magnetically shielded high frequency and the neodymium low frequency transducers minimize interference when used in close proximity to video monitors and the system is THX pm3 approved. An LED indicator on the front glows green when the speaker is on and flashes red at the onset of clipping in either the low or high frequency amplifier.

The rear panel features the popular Neutrik “combi” input connector that accommodates either an XLR or 1/4-inch connector in either balanced or unbalanced configurations. A DIP switch array provides switch selections for input sensitivity (+4, +8 dBu or -10 dBV), input trim control enable, Very Low Frequency Protect (which changes the low frequency roll-off to a 24 dB/octave slope), Hi Frequency Level (+1 and -1 dB) and Low Frequency Boundary Compensation (-1.5, -3, and -4.5 dB) to adjust for low frequency build-up when placed near corners or walls.

Also on the rear panel is the revolutionary Room Mode Correction (RMC) section (see below) that contains a parametric low frequency equalizer with width, frequency, and depth controls as well as an active LED indicator, enable switch, and remote bypass jack.
The rear of the LSR6312 subwoofer is similar to the 6328’s except that it has a bass management circuit that’s accessed via combi connectors for Left, Center, and Right inputs (with corresponding output male XLRs for connection to the main speakers), plus a Sub-Direct Input jack with a 0/+10 dB push switch and a Summed Out male XLR. The RMC section is again similar except for the added Make-Up Gain control that allows for an additional 6 dB of boost. A DIP switch array is also present, but with slightly different selections, with Input Trim Active, +4 and +8 Input Sensitivity, Signal Polarity Inverted, -4 dB Bass Alignment (which reduces frequencies below 50 Hz when the subwoofer is placed near a boundary), and RMC Defeat switches. An additional LCR bypass jack allows for the bass management to be bypassed remotely.

The manual included with the 6300 series is short but to the point and very informative, with sections on placement, interfacing, and a comprehensive look at all the controls and options. 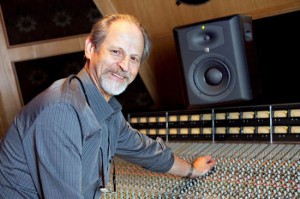 So Exactly What Is RMC?

After much research, JBL determined that in rooms without the benefit of low frequency acoustic treatment, there’s usually a prominent low frequency trouble area due to what’s known as room modes.

Room modes are low frequency resonances caused by standing waves that occur because of the geometry of the room and its boundary surfaces, with the most prominent modes occurring between opposite surfaces. If response peaks due to these modes are not corrected, mixes can be bass-shy because you tend to overcompensate for what may sound like too much bass in the program. Conversely, room modes can cause a lack of bass at the mix position that can lead you to add too much bass into the mix. In most rooms, the response rise due to the dominant mode will usually be in the range from about 40 Hz to 60 Hz, with response dips due to floor reflections from 50 Hz to about 90 Hz.

Because these room modes occur in just about every room (especially ones without a state-of-the-art design), JBL created Room Mode Correction (RMC), which is a system designed to correct the response peaks due to these room modes by introducing a carefully tailored inverse EQ response. Both the LSR6328P and LSR6312SP contain a built-in single section 1/10th octave parametric equalizer that can be adjusted to compensate for the major low frequency response peak caused by standing waves in a particular listening space. Using the tools and step-by-step instructions provided in the RMC Kit, it takes about 30 minutes to perform the adjustment process for a stereo system.

The RMC kit (included with each monitor) incorporates a specialized sound level meter, calibration CD, user guide, measurement chart paper, width template, RMC adjustment tool, RMC remote bypass control, and even a 9-volt Alkaline battery. Using the calibration CD, warble tones spaced approximately on 1/10th octave centers are played over the speaker systems, and the room response is measured and plotted point-by-point on chart paper. The center frequency and level of a response peak is identified, and the width of the peak is determined using the Width Template. Then by using a look-up table in the user manual, an inverse frequency response curve is determined and entered into the RMC equalizer section located on the rear electronics panel of the LSR6328P or LSR6312SP.

JBL LSR 6328P/6312SP In Use
I used a set of LSR6328P’s with a pair of 6312SP subs to mix both the stereo and 5.1 for the upcoming Amon Tobin CD and DVD releases (called Chaos Theory), which was derived from the Splinter Cell 2 game soundtrack (which should be released as you read this). Even though the 6300 series has the RMC system, the monitors sounded so good that we decided not to touch anything initially and just use them as is, at least until the project was over. What we got was a product that blew us all away.

Boy, do these things sound good. During the stereo mix without the subs attached, we were constantly surprised at the amount of low end that the units produced. Now this isn’t hyped low end that’s so frequently found on many speakers the same size, it was real, honest to God accurate low end that allowed you to balance the kick and bass with the same accuracy that you get with dual 15-inch soffit-mounted units. Chalk up favorite item #1 for the 6328’s.

Favorite item #2: The mids and highs seem to be perfectly balanced in that you won’t be fooled later when you take your product out and play it on other systems. They translate oh so well, and since the distortion is low, you can listen for long periods of time with no fatigue. And if you want loud, yes they can play loud enough to make your ears hurt if you’re sensitive, but they keep their tonal balance even at extremely soft levels.

But the real proof of the pudding is when you take the project to mastering, and in this case the mixes were probably the most consistent that I ever achieved, both from track to track and frequency balance. Oh, there was a little EQ used, but we’re talking mostly tenths of a dB here and there.

As good as the 6300’s sounded flat, they sounded even better with the RMC enabled. Though it may take a little time to work through the process, it’s definitely worth it. Even though we were using the 6300’s in a great sounding room to begin with, enabling the RMC cleared up a little problem that we weren’t even aware of. I can only imagine what how much it will help when employed in a small room with no design or treatment (which is what has now become the typical DAW room).

The LSR6300’s are the best off-the-shelf production monitors I’ve heard since…maybe ever. And I wasn’t the only one impressed. Just about every engineer that’s come through the three studios at Front Page Recorders has said the same thing, throwing aside their favorites for the 6328’s. Check these things out.
They have everything you’d want or need in a monitor; smooth response at all levels, no listening fatigue, plenty of volume — it’s all there. Highly recommended!