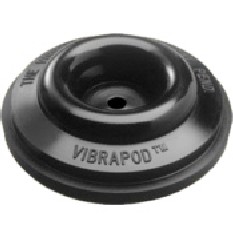 As I’ve written in part 1, one of the first things to get dropped from a component conception stage by a designer to reach a price point (especially when it’s supposed to be affordable) is the isolation. They are 3 general form of isolation available: mechanical (vibrapods are a good example), mass damping (like putting sand in loudspeakers stands) and shielding (think about speakers for home theater). We will concentrate on the first one here.

In the audiophile tradition, we must tweak everything. Some works, some don’t. Please read to the finish, I hope you’ll learn something here, but vibration isolation work and it can be cheap. Vibration cause a lot of small movements, if we look at speakers, the image can wiggle a bit if the enclosure is not rock solid (never seen one completely inert). In components like CD players, it causes small reading errors which rob us details. As you can see from pictures, I’ve gone over the top for most (non-audiophiles) friends. I decouple everything, better, make it twice.

On The CD player:

With ceramic cones: These cones are no longer available but I’ve tested them so you can understand the possibilities. They were about 50$ for 3 cones of 1’’ in diameter and 3/4’’ high, I’m not sure I remember correctly who manufactured them. Compared with no isolation, the bass has a bit less overhang and voices are an hair sweeter, small differences.

With rubber ball and holder: No longer made (again…) It’s a ball of an inch in diameter made of some kind of rubber with a holder in plastic for secure fit at about 50$ for 3. The sound was just a bit more controlled, with better impact (especially with cymbals) and the voice was airier and sweeter.

With Vibrapods: Well, if you read this, you probably know the Vibrapods. It’s a well regarded audio accessory in the form of rubber footer (see their web site for further explanations, I believe in results not in hype, available for specific component weight). In place, Jorane have more energy and the volume seem louder. The rest was similar to no isolation at all.

With Vibrapods/Vibracones: The Vibracones were designed to work in conjunction with the Vibrapods. It’s a cone with a metal ball to go on top of the Vibrapods. It’s a strange feeling, when I pressed buttons on the CD player, it wiggles. The make a story short, the metal ball allow horizontal movement of the component it support. The good news, it’s better than any other isolation device tested. Not huge differences but the energy is intact and a layer of grunge disappeared.

First part of tests: I was a bit confused by the results obtained here in this round. From what I remembered, when tested with a Sony ES CD player, the results where a lot more evident. Maybe it’s the construction of the Talk Thunder but it doesn’t seem sturdy at the same time…

The granite plate: If you never heard this one it’s ok. I had the idea when I’ve checked to buy a butcher plate (1’’ to 2’’ thick) because it’s supposed to have good isolation propriety. The problem was the cost: at least 90$ each. At another kitchen store, a granite plate caught my attention, ½’’ thick, 18’’x 10’’ with 4 small hard foots and 16$ a piece fitted the bill well. Search around; I’ve got 2 at Stokes (Canadian store). The idea was to get rid of vibration ‘Verity Audio’ style; they divide the bottom (woofer) from the top (midrange & tweeter) enclosures with a granite plate and sorbothane. It’s easily the best lineup of speakers I ever heard, costly but truly great. So the granite plate was placed between the stand and the Vibracones/Vibrapods, this was the best set-up yet, the definition of attack and decay increased and the hardness or grunge was a lot less present. With the balls instead of the Vibra duo, the clarity and punch was better, a greater control of instrument decay was audible than with the plate alone. With the ceramic cone, it was better than nothing but the other devices had better musical reproduction.

The topping: The final touch the equation was to put damping, in this case a 10lbs 1’’ thick glass plate on top of the CD player. It was a very good thing, the music relaxed a bit, micro-dynamics were more controlled, instruments better defined and the soundstage depth increased. See the set-up picture. So damping is important, a lot of inexpensive component have thin casing that resonate, this can help. I was also in shock when I’ve put bricks on the top of speakers, please try this at home.

On the Cayin Integrated amp:

With ceramic cones: The cones are just too low to support the amp.

With rubber ball and holder: A greater sense of weight was imposed on the music. The depth of the soundstage increases and gives a lot more information on the spatial placement. Transistents are still a bit hard. Maybe it’s not the best idea to put the balls under the Cayin because of its weight (about 55lbs) it causes deformation in the rubber material.

With Vibrapods: Because it’s also not high enough, they were placed under the amp own footer. With this combination, the focus, the micro/macro-dynamics and image was better than the balls.

With Vibrapods/Vibracones: Focus is the name of the game here, intelligibility of the message also becoming very interesting. There’s less haze and the soundstage grew in width, depth and even in height. Great step forward.

The granite plate: When put alone under the amp, it was just a hair better than the Vibrapods. But it was less effective than the Vibra combo with just a bit looser bass, harder treble and convincing soundstage. When I’ve put the Vibra combo on top of the granite plate, the soundstage and definition increase and was the best set-up yet. In combination with the ceramic cones under the granite plate, the sound acquired better micro/macro-dynamics without sacrificing treble liquidity. The magnitude of improvement was huge.

Your results may vary, in my case the CD player didn’t respond a lot to the isolators but the amp did. A general rule of thumb: the more mass, rigidity and variety of material (to ensure no specific frequency ringing) is used, the better it’s going to be. Sadly, the law of diminishing returns kicks in at some point. With the above tricks, your system will step closer to higher fidelity.