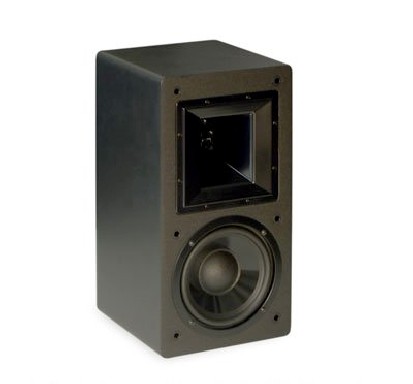 “All that sound’s coming out of THOSE?” the wife wanted to know. It was a good question; the latest offering from Dr. Poh Ser Hsu and his Southern California based Hsu Research is definitely a little guy.

At a mere 15 inches high and 8 inches wide and deep, the HB-1 bookshelves are about as unobtrusive as speakers come. But, while they might be small, they are actually big news: They’re NOT a subwoofer, which is Dr. Hsu’s normal (and decidedly legendary) stock in trade.

Rather, Hsu’s first foray into bookshelves has resulted in a speaker that resembles (on first blush, anyway) something out of the Klipsch Synergy line. They feature a 6 ½-inch woofer and a “controlled-directivity horn that gives excellent microdynamics and imaging under real world conditions that few other transducers can match,” according to the company’s promotional blurb.

Why horns? Like the great Paul Klipsch, the inventive Dr. Hsu believes that, properly executed, the use of a horn to reproduce high frequencies eliminates crossover issues with the typical dome-style tweeter that can result in less-than-flat off-axis response. (Dr. Hsu is fond of recalling a demo back in June at the Home Entertainment Show in Los Angeles. “The folks from Home Theatre magazine came in and walked all the way around the speakers. They couldn’t believe how nice they sounded.”) 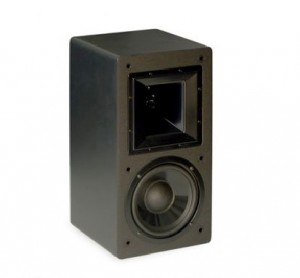 After a fine demo at Hsu headquarters, we decided to try out the HB-1’s in our own environment. The rear-ported speakers were placed on 26-inch Premier stands about three feet from the back wall and in a traditional, slightly toed-in “triangle” pattern vis a vis the listening position. With low frequencies extending only to 60 Hz, these diminutive speakers are specifically designed for use with a sub. We fired up our trusty Sony SA-WX 700 for several days of listening, setting its crossover point at 80 Hz, as the Hsu manual recommends. (Experimentation, of course, is always encouraged.)

We immediately noticed that, indeed, it wasn’t necessary to be glued to the “sweet spot” to hear all that the HB-1’s could do. Moving a bit from side to side, standing up, even walking to other locations in the room didn’t significantly alter the speaker’s perceived upper-end response.

That, of course, wouldn’t matter a whit if the sound you’re trying to make flat and even offaxis isn’t pleasing to begin with. In this case, it unquestionably is, and the HB-1’s are the kind of product that makes one wonder why spending twice as much (or 10 times as much) is really necessary.

Hsu Research already had been manufacturing the novel Ventriloquist VT-12 sub/satellite speaker system, but Dr. Hsu thought there was a need for more than what the Ventriloquist’s 2 ½-inch drivers could do.

“They sound impressive for their size, but they do have some limitations in terms of dynamic range,” he said. So the HB-1’s were born, and Dr. Hsu, being a fan of female vocals, knows they’re typically the acid test for bookshelf speakers.

“I think a female vocal with bass accompaniment is difficult to reproduce,” he said. For one thing, their range is frequently right in that slippery-slope area where an improper crossover can muck things up. And many “budget” speakers open the door wide open for sibilance. Not so with Hsu, on either count: We fed the HB-1’s a healthy diet of female voice. Erin Boheme’s “What Love Is” (Concord) gave the speakers the opportunity to show off a characteristic that was evident in virtually everything we threw at them: sweetness. Boheme’s lilting soprano was almost holographically front-and-center in the soundstage and was reproduced in all its vampy, romantic glory. The upper end of Brian Bromberg’s bass was clearly separate and distinct (and nicely articulated, we might add.) Another Hsu demonstration favorite, Joan Baez’s “Diamonds and Rust” (A&M) was equally stirring. In Ella Fitzgerald tradition, Baez’s soprano can shatter glass, not to mention becoming screechy on inferior audio systems. The HB-1’s rendered her lovely tones as smooth as the finest silk.

Once the speakers passed the female test, we varied the fare, first letting a man sing. Frank Sinatra’s voice on “The Girl From Ipanema,” a cut from his highly underrated collaboration with Antonio Carlos Jobim (Reprise), was utterly creamy. Solo piano? When we closed our eyes, we thought there just might be a Steinway in the room as Arthur Rubinstein rendered Beethoven’s “Pathetique” sonata (RCA Living Stereo.)

Massed strings can be a challenge for any speaker, but at medium volume levels, even full-orchestra classical pieces were forceful and cohesive, particularly Hilary Hahn’s performance of Brahms’ Violin Concerto with Academy of St. Martin-in-the-Fields (Sony Classical).Hz,m

Could these bantam babies rock? One listen to the punch of the Rolling Stones’ “Brown Sugar” from “Sticky Fingers” (Virgin) answered that question in the affirmative, with Bobby Keys’ blistering sax solo especially sizzling.

My final take? The words “giant killer” get pretty old after awhile. We’ve been through all the Insignia madness and heard more than enough about bargain bookshelves like the Infinity Primus 150. But, at $125 a pop, it’s hard to imagine getting more than what the HB-1’s offer. The carton itself says it all, proclaiming that the speaker’s voicing boasts “fine tuning by Dr. Hsu to sound good to his ears.”

That’s all you’ll need to know.

from aﬀordableaudio, By Steve Eddy