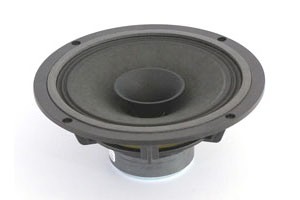 It’s been sometime since I’ve sat down to write a review. I’ve been so looking forward to reviewing these drivers for such a long time. I had made the decision to purchase these full rangers about a year ago. They seemed reasonably priced, well built and “green”. Their stated efficiency is 96.5 dB, so even mini amp users can get reasonable levels of volume for their listening pleasure.

I’ve recently become enamored with “mini amps”, low-powered , but wonderful sounding little things after hearing a friend’s 2A3 based DIY amp. So much so that I have encouraged my eldest brother to buy himself a Decware 1.5 watt SE triode amp. Not having the depth of pockets that he has, I decided to try to emulate a low powered, but good sounding system. I think I’ve come pretty close.

As some of you may know, I’ve built a 41Hz.com Amp 6 Basic, a great sounding little amp with somewhat less than 10 watts per channel into 8 Ohms. It sounds terrific, and has been able to drive any of the loudspeakers have around the house. Using a $10.70 (Canuck) passive pre-amp (6 sources, tape monitoring and Alps blue potentiometer), it sounds pretty damn good. Better than it has any right to. Bass has not been a problem. I just needed an efficient loudspeaker that sounds good, and after my experiences with my terribly ugly, but great sounding open baffles, I knew I wanted a set of respectable full rangers. The Amp 6 Basic costs $54 USD, + $7 for a surplus notebook computer style 36 watt switching mode power supply.

Perry has been under fire on various forums about slightly obscure and sometimes apparently being less than forthright regarding the release of his drivers. I will spill no ink commenting about “he said, he said” comments out there on the net regarding Hemp Acoustics, A Brown Soun, and Omega Loudspeakers. I can only suggest that some delays have been due to certain legal issues that have taken Perry away from the ability to supply speakers to potential customers. But he hasn’t been sitting on his hands, either. He has continued to develop different driver models based on “sound” engineering principles, and the list of OEM drivers he is supplying has continued to increase. If in doubt, go check out his website. I hope to do an interview with him in the future.

Check out the specs too, of these drivers. With a Qts of .41 , they are almost ideally suited to a ported enclosure. I had asked Perry a little about his choices and beliefs. One comment that stuck out was that many full rangers require complicated enclosure to work well. He simply wanted to provide a full range driver that could be put into an enclosure that most normal humans could build, or to allow a cabinet retrofit to occur. He had suggested an enclosure of 20 litres or so. I just so happen to have a pretty well built pair of enclosures, that I thought would fit the bill. Tuned to 42 Hz as per Perry’s recommendation, I stuffed the drivers into the boxes. Later Perry had indicated that he thought I should remove some of the Dacron used in the enclosures as dampening material, which I did.

And now some listening notes. Placed upon 20” stands and spaced about 8 feet apart seemed like a good location for listening. Be careful! These speakers are not shielded (I toasted a 27” TV with these suckers, even though the speakers were never closer than 3 feet to the picture tube. The magnets are quite strong). Good thing the TV was long in the tooth and was due for replacement soon.

Whatever you may or may not have heard about full range loudspeakers, I can say that in the context of two very different amplifier/ preamp set-ups, these things rock. The McCormack 0.5/passive Microline Drive set up easily drove the Hemps with authority. No MIA bass here. Just good solid bass, fine midrange and sparkling highs. The McCormack’s have what I would classify as a “middle earth” sound. Good imaging, and all the flat earth stuff. The Amp6 Basic/active Microline Drive was another story. I wasn’t expecting the frequency extremes to be as good as it was. This combination opened everything right up, besting the more powerful set up in almost every sense. I’m not saying that either was bad, just that the smaller set up seemed to have more of it. Pace, rhythm, Attack and Timing are what I am talking about here.

Some recordings, and impressions:

“Michael Jackson: Thriller”, as good as I’ve heard. No screech or irritation. “Billy Jean” was produced with a non-fatiguing sound—a true test of treble performance. Attach (in spades but not painfully so)! I’ve never really heard the wood blocks being struck in “Thriller” before. Want a sense of how good two musicians can be together? Try Pat Methaney and Charlie Hayden’s “Under a Missouri Sky”. Microdynamics are excellent. Extension in both directions are produced in a controlled, relaxed manner. If you know what a Martin Dreadnought sounds like, then you’ll easily recognize it on “Clampton Unplugged”. Delicate, refined and deftly played. A natural, open and spacious sound always was produced. A sense of the venue is portrayed, but with a little less body then I’m used to (is that colored?). BUT that was with the Amp6 Basic, and the Microline Drive in passive mode. Switching to active mode on the preamp awoke the potential for this combination. It boogied. Loreena McKinnet’s “The Book of Secrets” was terrific. Want to check out how detailed something is? Try “Marco Polo”, a taste of Tantric music, complex, layered, and beautiful. You hear “into” the music. I truly believe that if something has a “laid back” sound, or something sounds a little flat dynamically, it is due to a lack of distortion and colorations. I think this is the case with the Hemps, except there really are dynamics present, real dynamics. And now for a long standing audio favourite, “Dark Side of the Moon”. In particular, “Money”. The layering and complexities, texture AND speed are all there.

So, what do I really think of the Hemps? I love them. Their combination of all things from the other (Flat) side of the audio earth, bass, sound staging, and naturalness are new to me in a most refreshing way. The fact that a good audio guy like Perry Pecker is who people will be purchasing these from is a bonus. And he’s got a lot more audio truths to present to us. Visit his website and see that this driver makes up a small percentage of what he (and his team) does day to day. Have a gander at the various models that are in the process of being developed (and like Ernest and Julio Gall) “will serve no wine before its time”. And just like E&J Gallo, the price of entry is a value leader, I think—just USD $115 each. Add the cost of constructing a decent enclosure (say $200 or less if DIY), or recycling a pair of enclosures for almost free, and you have a great speaker pair given the price. I dare say you have a great speaker pair regardless.

Know this, my experiences thus far have been based on a less than ideal enclosure. Given this fact, I’d say that the combination of 41Hz Amp6 Basic, and the Hemps are almost a match made in heaven.