HE 2003: During the recent Home Entertainment 2003 show in San Francisco, several high end audiophile firms showed their upcoming SACD and SACD/DVD-A Universal players to awaiting music fans. I should add that showed is the operative word here as many of the high end SACD and SACD/DVD-A players we had seen and heard at the CES 2003 show in January are still not available for purchase.

But the good news is that most if not all of them will be in the next month or so, in plenty of time to be on store shelves for the important Christmas selling season this Fall. Here’s a run down of some of the high end players I heard and/or heard about at HE 2003.

Bel Canto used this setting to display several of their products including their Pre6 Multichannel Preamp and their amps as well as the new universal product which is now simply called the Bel Canto PLayer.

To show off the new PLayer, Bel Canto officials played selections from Keb Mo’s recent Multichannel SACD «Just Like Me» as well as some audience selections including Beck’s «Sea Change» Multichannel SACD and a Stereo CD. As was the case at CES, the Bel Canto PLayer continues to impress with its sonics. Bel Canto officials point out that the unit features a proprietary discrete analog output stage as well as a «video off» mode which is said to reduce video crosstalk when playing audio only disc formats by switching off unneeded video circuits.

The list price of the PLayer is $8,900 and it will be shipping to dealers at the end of June. Bel Canto has been taking orders for the PLayer since CES and tells me they are backordered for several months on the product. So while you may get to audition one at your Bel Canto dealer soon, Bel Canto’s staff tells me it will probably be 2 or 3 months before orders taken today are filled. Obviously there is a demand for high end SACD and DVD-A players!

Blue Light Audio/EMM Labs DAC6 and Meitnerized SACD-1000 Transport
In January at CES 2003, one of the hits of the show was the debut of the EMM Labs Meitner DAC6 DSD DAC with the accompanying EMM Labs customized version of the Philips SACD-1000 Multichannel SACD/DVD Video player. By adding an optical card into the SACD-1000′s expansion slot, Ed Meitner and his staff at EMM Labs turned the player into an SACD transport. The EMM SACD-1000/DAC6 combo was released in February and has been a hit in audiophile circles since then.

At HE 2003, the Meitner system was being shown in two rooms on the show’s 5th floor by Blue Light Audio, Chambers Audio in Portland, Oregon and GTT Audio & Video of Long Valley, New Jersey. Each room featured the DAC6, the EMM Labs SACD-1000 (which was being referred to as the «Meitnerized Philips SACD Transport»), the EMM Labs Switchman II Multichannel Preamp/Switcher, Absolute Power Cords, Kharma Enigma Cables and Interconnects, Tenor Amps (the Tenor 300 HPM Hybrid Mono Amps in one room and the Tenor 75WP OTL Mono Amps in the other) and Kharma Speakers (the Kharma Midi Grand/Engima in one room and the Kharma 3.2RM/Enigma in the other).

There were several items of news about the Meitner products at the show. The first production run of DAC6 DSD DACs as well as the remaining stock of Switchman II switcher/preamps had sold out earlier in the year. So another production run of each product is underway with delivery scheduled to customers on a waiting list by early July. Of note is that the new editions of the Switchman will feature all of its connectors on the back of the unit (vs. the front as it has been in the past) and the front panel of the new Switchman will match the look of the DAC6.

To distinguish the audiophile Meitner products such as the DAC6 DSD DAC and the upcoming DCC2 Stereo DSD DAC/Preamp and Meitner SACD Transport, these products will be sold under the name «Blue Light Audio» in the future. The name I’m told comes from an earlier Meitner product that featured a blue light on the front panel. In terms of when we might see the two new products — the DCC2 Stereo DSD DAC/Preamp and the Meitner SACD Transport — I’m told that they are still about 3 months away from availability.

Also worth mentioning, the prices of the Blue Light Audio Meitner products is going up from the levels they were at in February. The new pricing will have the 6 Channel DAC6 DSD DAC for $10,000, the 2 Channel DCC2 DSD DAC/Preamp for $10,000, the new Switchman 6 Channel Preamp/Switcher for $7,000 and the Meitner SACD Transport for $5,000. So the price of the Meitner products is now higher, but given their sonics I think there will still be many audiophiles interested in giving them a listen.

Farouja DVP-2000
As one would expect at a show like HE 2003, the folks at Farouja put on a dazzling display of their latest video products. Included in the demonstration was their DLP-HD10 DLP Projector with 1280×720 resolution and the FDP-DILA2 Digital Projector which featured 1365×1024 pixel display. In each case, the projectors were driven by Farouja’s NRS-DCS video processor along with amplification from Parasound and Martin Logan speakers. The NRS-DCS not only includes Farouja’s proprietary video processing circuitry but it also includes an integrated DVD Video/CD disc player, so it can be used as an all in one source unit for home theater playback.

In an earlier article from HE 2003, we noted that Farouja announced the new DVP-2000 Digital Cinema Source. This product will build upon the NRS-DCS product by adding additional video processing features as well as both Multichannel SACD and Multichannel DVD-A playback. According to Farouja «the audio performance from the DCS-2000 will impress the most demanding audiophile with a proprietary audio stage optimized for both audio for video and audio CD use. Low jitter crystal oscillators, multiple power supplies, and AES/EBU digital connectors all combine for an audio performance rivaling the most expensive CD-only transports.»

Farouja says the DVP-2000 will be available in August for a list price of $14,995. The DVP-2000 wasn’t being demonstrated at the show but an enthusiastic Farouja staffer told me it will be worth the wait as it «really kicks butt». Well, we’ll have to keep an eye out for this one.

Kimber Kable & Ray Kimber’s DSD Recordings
In a bit of a departure, Ray Kimber of Kimber Kable fame was demonstrating some DSD recordings he has made of the local college band in his hometown. The recordings were made with a Tascam 2 channel DSD recorder, EMM Labs Meitner DSD Converters and a new recording technique that Kimber calls «IsoMike».

The recordings are very well done and did a nice job of capturing the sonics of the band performances. Down the road, Kimber says he would like to release the recordings on SACD disc as a fund raiser for the college. In the meantime, Tascam is promoting the recordings as an example of what is possible with their 2 channel DSD recorder.

Kimber was handing out a «downsampled CD» of some of the recordings to show attendees. He also mentioned that he would make dubs of the recordings for those who had access to a Tascam DSD recorder to hear the recordings in their native mode. That would be great, but I’m afraid I’ll have to wait for the SACD editions!

Krell SACD Standard
One of the most talked about audiophile players at the CES 2003 show in January was Krell’s upcoming SACD Standard player. It is a cosmetic twin to the company’s current DVD Standard DVD Video player. The SACD Standard has garnered much interest being a Krell audiophile player with a relatively low price of $3,999 — much lower than other SACD and SACD/DVD-A offerings from other high end firms.

Early in the HE 2003 show, I was unable to find the Krell SACD Standard in any of the exhibits. During a break, I spotted Krell CEO and Chief Designer Dan D’ Agostino chatting with Cisco Music about Cisco’s reentry into the SACD Disc market. When I asked Dan about the SACD Standard, he confirmed that Krell had elected to focus on getting the player shipped vs. showing it at HE 2003. The good news here is that the player is scheduled to start shipping to dealers in mid June. Which means that by the time you read this show report, it should indeed be heading towards a Krell dealer near you for audition.

At HE 2003, I was able to audition the Tri-Vista in a system that included two other Musical Fidelity products — the «KW» amp which offers 1,000 watts per channel of power and the «KWP» preamp.

I was told that the Tri-Vista uses a tube that is in short supply in its analog output stage. As a result, Musical Fidelity only plans to make 800 of these players. So while the Tri Vista is indeed available today (unlike some of the other SACD players at the show), they may be on the market for a relatively short period of time. At a list price of $6,495 the Tri-Vista is definitely in the high end category, but it is worth a listen — especially when teamed up with the related KW and KWP products.

As for the rumors of a future Multichannel SACD player from Musical Fidelity, there was no information on that at HE 2003. I’ll keep an eye out for more on that the next time Musical Fidelity is on display.

Music Hall Maverick and Shanling Tube SACD Players
Roy Hall from Music Hall was at HE 2003 to show off several of the audio products his firm imports from the UK and Chinese markets to the U.S. As was the case at CES, Hall was demonstrating the Shanling SCD-7200 Stereo SACD Tube Player from China.

At HE 2003, he was using the Ella & Louis SACD from Verve to show off the player’s sonics to good effect. For a $2,695 Stereo SACD player it did a nice job on the music.

Other Goodies On Display
In addition to high resolution audio players and a wide selection of SACD discs available for purchase, the HE 2003 also featured a number of Home Theater and Video products of note. A lot of attention was directed to the Samsung exhibit where their HLN617W 61″ HDTV Monitor Television featuring DLP Technology was impressing crowds with its large and sharp picture image, 1280x720p resolution, Farouja Film Mode enhancement, a depth of only 19.4 inches and a low $4,999 list price.

Even more dazzling, although still in the prototype stage was a unique rear projection acrylic screen from Nippura. Known as the Blue Ocean, this technology allows a seamless large screen for sizes up to 300″. Using acrylic materials from aquariums such as the one in Monterey, California, the borderless screen provided a very sharp image and a very wide viewing area delivering very high quality images from almost anywhere in the room.

HE 2003 was the second time the Blue Ocean acrylic screen was shown in the U.S. and drew oohs and aahs from both attendees and other exhibitors alike. The projected price was in the neighborhood of $7,000. It will be a product to keep an eye on — both for home and professional applications — where very high video and visual output is a requirement.
Bel Canto Shows Off Their Upcoming PLayer Multichannel SACD/DVD-A Product Along With Their Preamp and Amps at the Library During HE 2003 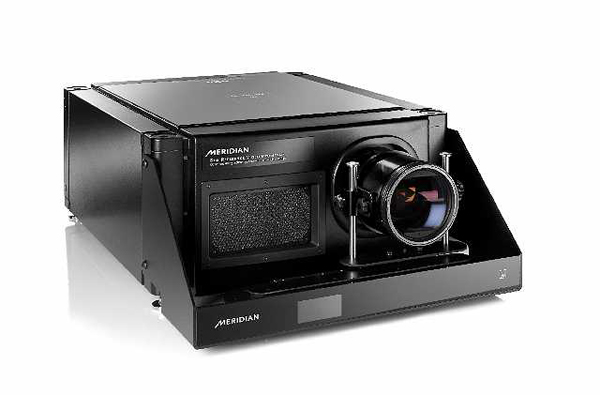