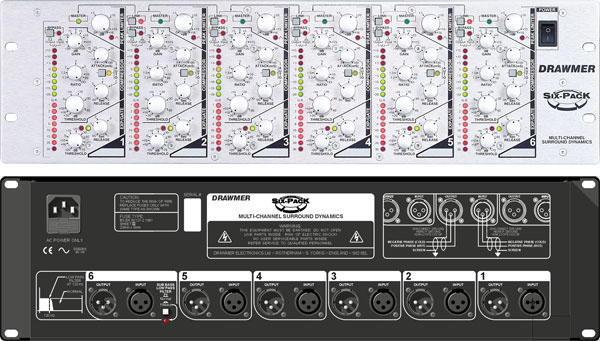 One of the biggest problems I have had since my beginning days of surround mixing has been that, unless you were mixing on an SSL of some sort, there was really no good way to compress a multichannel mix. Except for jury rigging, an effective, linkable multichannel compressor was just not available. Now all of that has changed with the introduction of the new Drawmer Six-Pack, an analog multichannel compressor/limiter that’s really built with multichannel applications in mind.

The Specifics
The Drawmer Six-Pack is a single 3U unit that incorporates six channels of dynamics processing that are not only linkable, but linkable in multiple ways, allowing dynamics control in any format from mono to 5.1 surround. The unit is comprised of six independent expander/gates, six independent auto or manual compressors, and six “zero overshoot” limiters, with the basic design of each processing module derived from the highly regarded Drawmer DL241 compressor.

The six channels of processing are arranged vertically to occupy the minimum amount of rack space. Each channel has enough parameter variety to give the user a lot of flexibility without the packaging being too dense to easily use or having too many features to quickly deal with. At the top of each channel is a Peak Limiter control with an associated red LED that indicates when its threshold is exceeded. This is followed by the Compressor section, which has Gain, Ratio, Threshold, and Attack and Release controls. An Auto button disables the Attack and Release controls and continually optimizes the attack and release times according to the dynamics of the material. The compressor owes its smoothness to the fact that it uses a soft knee for the first 10 dB of gain reduction, then turns into a hard knee after that. The final section is an Expander/Gate that features Threshold and Release controls along with red and yellow status indicators. 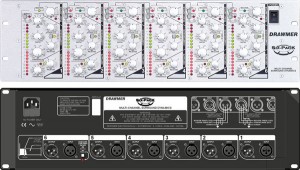 Instinctively laid out LED bargraph metering gives clear visual indication of all dynamic functions. Each channel has both an eight-segment LED gain reduction meter that reads from 1 to 30 dB and an eight-segment output meter that reads in 5 dB segments from -20 to +15 dB. Every channel also has a Bypass control that is connected to a relay to provide a hard-wire bypass that passes signal even if the power to the unit is turned off. The rear panel contains electronically balanced XLR inputs and outputs for each channel as well as an LFE Filter switch on channel six (more on this later). The manual is small but thorough enough, with a good explanation of all the controls, some theory of operation, interfacing suggestions, and a block diagram of the unit.

Lets Link
The universal linking facilities of the Six-Pack allow for the various configurations commonly used in multichannel surround processing as well as conventional stereo and single-channel operation. This is one of the best features on the Six-Pack, and it is very well conceived.

Essentially, you can link the channels in multiple ways via a series of Link switches on each channel except channel 1. By depressing a Link switch, you automatically link to the channel directly on the left. A Link LED indicator lights on the channel that is being slaved and a Master LED indicator lights on the channel that you’re linking to. When in the “link” mode, none of the knobs on the linked channel function, as the parameters are now controlled from the Master channel, which is very handy. This allows you to set up a number of different master/slave combinations as appropriate for the application.

The LFE Filter
The Six-Pack has a rear-panel switch on channel six that inserts a 120 Hz, 24 dB per octave LFE filter into the circuit. This is a wonderful addition since there’s just about nothing in today’s typical studio that can accurately duplicate a filter of this type. Yes, it’s true that the filter can be applied at the encode stage during authoring, but I always felt that if the mixer could apply the filter, then he should do it just to be sure that it gets utilized. The Six-Pack now makes this a no-brainer by simply depressing a switch, instead of having to fudge the LFE filter with a combination of channel filters and EQ.

Drawmer Six-Pack In Use
I used the Six-Pack on a number of projects over the course of several months. The unit is really easy to use, especially after the linking is set up, and performs the way you’d expect a Drawmer product to perform; that is, excellent in every way. As I became proficient at using it, I was able to make my mixes hotter than I ever could before, yet not have them sound too squashed (which seems to be all the rage these days). Plus, I never had to worry about the dreaded digital overs that happen when mixing hot either back to a DAW or DA-98, thanks to the built-in limiter.

Many of the projects that I do are concerts destined for DVD-Video that usually don’t get mastered because the budgets are limited, so the Six-Pack gives me the extra control that I need to make the mix as hot as possible. While the peak limiter is especially useful, I found that if I drove it too hard, I could hear it distort a bit. However, if the limiter is only occasionally touched (as described in the manual), it’s never heard and provides the protection required.

The Drawmer Six-Pack is an excellent piece that no surround mixer should be without. It’s extremely well thought out, well designed, and performs well in multiple applications. At a MSRP of $2575, it is truly a bargain. In fact, I was shocked when I found out what the price was since it feels like it should cost a lot more. But price aside, this is one box that should be a standard in any surround mixing studio.