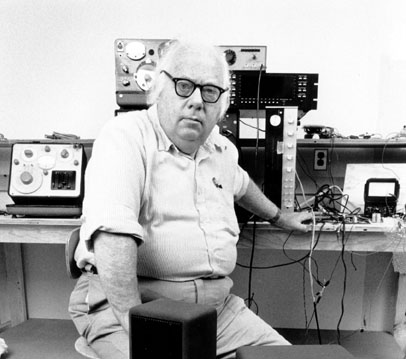 Sound systems 50 years from now will probably be a logical outgrowth of what we see today. One reason I think this is because today’s electrodynamic loudspeaker driver, in a form that would be clearly recognized by its inventors, was developed in 1926 by Rice and Kellogg at General Electric, and is still going, and going after 75 years. Maybe the next 50 years will better that technology, but just like hard disks that keep getting better every time something comes along that challenges their hegemony, that may well happen in loudspeakers, too.

A moving voice coil wound on a former, held axially by a spider, and connected to a diaphragm with an edge connection to a basket was clear at the time. Probably the single largest jump in its development was an outgrowth of the rise of technology due to World War II: for the first time permanent magnets were strong enough to be used to create the magnetic field. The 1926 speaker used a “field coil,” an electromagnet used to create the required field. Thus each 1926-1945 loudspeaker driver usually needed four wires, two for signal, and two for DC.

At virtually the same time as the introduction of the electrodynamic driver, Wente and Thuras at Western Electric developed the compression driver for horns. Using an inverted (looking from the front) aluminum dome with an edge voice coil operating into a “phase plug,” this invention would also be seminal. While once again there’s been a lot of development work (on magnets that continue to evolve, phase plugs, cone materials from aluminum to titanium and beryllium, and suspensions), today’s drivers would be perfectly recognizable to the original inventors. The attached horns would be mostly recognizable, too, although there’s been a lot of development there as well. From exponential horns (1920s), through multicell (1930s), to today’s constant directivity types (late 1970s) is a march of progress, although it is interesting to note that a few so-called “professional” loudspeakers still use exponential horns that Western Electric labeled obsolete with their introduction of the multicell around 1935! Thuras also invented the “bass reflex” (today called the vented box) cabinet, patented in 1930.

Harry Olson of RCA and Leo Beranek of MIT produced the second wave of understanding of loudspeakers in the late 1940s and early ’50s, applying mathematical formulae to make the connection between the mechanical parts of the loudspeaker, box, and air, and an equivalent electrical circuit. Since electrical engineering filter theory was well developed, if the parts of the loudspeaker such as moving mass could be represented as inductance, for instance, then a circuit could be drawn and analyzed electrically. However, it took Neville Thiele, starting in the ’60s, followed up by Richard Small in the ’70s, to make the equivalent electrical circuits broadly usable in day-to-day design by connecting the physical parameters of the loudspeaker that you can measure to the equivalent electrical circuits. The Thiele-Small parameters are today the most commonly used method in the world of describing loudspeaker drivers between driver manufacturer and loudspeaker designer, but when Thiele presented his work as possibly patentable to his employers, EMI Australia, they said, “We don’t care what you do with it, as it’s of no practical value!”

For the case of the sealed acoustic-suspension speaker, the relationships were understood somewhat earlier. “Hoffman’s Iron law, described by Henry Kloss in the mid 1950s and later turned into exact mathematical form by the engineers Thiele and Small, governs the behaviors of woofers. Essentially, it says that a woofer’s efficiency is proportional to the volume of its cabinet and to the cube of its cutoff frequency. For example, suppose you have a woofer whose response is flat down to 40 Hz in a 2.0 cubic foot box. To make its response flat down to 20 Hz, you must either increase the cabinet volume by eight times (to 16 cubic feet) or use eight times as much amplifier power to achieve the same listening volume. This, in a nutshell, is why flat loudspeaker response down to 20 Hz is rare.”1 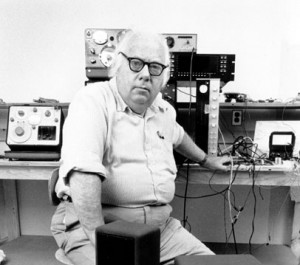 The acoustic suspension loudspeaker that used the air in a sealed box as the principal spring force was developed at AR in 1954. Edgar Villchur was the inventor, but Henry Kloss did most of the design work and made production practical. Within a few years, Villchur also developed the dome loudspeaker driver.

You can think of it as the back side of a compression driver radiating towards you, without a horn, although contemporary versions often include some measure of horn loading such as “waveguide” technology. While a dome doesn’t have a special advantage over a cone in dispersion, it has an edge voice coil, making the voice coil larger than that of the equivalent cone diameter and therefore capable of greater power handling. For sizes below about 3-inch diameter, the dome is often preferred, although cones are not unknown.

The next era of loudspeaker design I call the “feedback” era. This is an era in which, while the fundamentals were well known, balancing the juggling act that is loudspeaker design became better informed by measurements that were related to perception. In the 1970s and 80s, more became known about psychoacoustics and how it interacts with loudspeaker design and room acoustics. Among the important players here was Floyd Toole, then of the National Research Council of Canada, that provided a measurement program to provide feedback to designers. Another important program was the $10,000,000 Eureka project in Europe that found the relative importance of various reflections in listening rooms, finding the first ceiling and floor reflections to be of the greatest psychoacoustic significant. 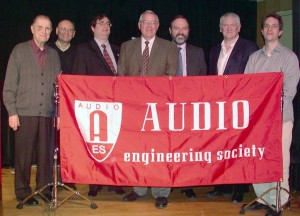 A seminal work that we have covered in an earlier issue was the 1989 piece that possibly could only have been done in a place like East Germany. Who else could take the time to do 32,000 A/B comparisons of loudspeakers, using 40 listeners and 45 loudspeakers in three rooms? The work is by Wolfgang Klippel,

“[t]he loudspeaker parameters, which are most relevant to subjective impression, are both sound pressure frequency response measured in an anechoic room in the direction of main radiation, and the sound power response (or the directivity factor)…”

While I set out to write about future sound systems, I’ve actually covered the loudspeaker past so far. All past is prolog, as Shakespeare says, and in this case I think it’s especially apt. That’s because, of all the “new” technologies that capture the headlines, such as interference between two ultrasonic sources generating audible sound, industry relies more on the continuous application of materials science progress on the ordinary designs as it does on the fundamentals described above. Every time some fundamental new technology comes along, when assessed in light of its practical performance advantages compared to cones and domes and their continuing progress, it loses in the end, at least so far.

So what is there to do down the road? First, sound systems should be more responsive to the space they are installed in. Since we know from Klippel, Toole, and others that the variation among rooms in which loudspeakers are used is already much greater than the variation among otherwise good loudspeakers, should we not be making the speaker more responsive to the room? This sort of naturally brings up internally amplified speakers. Already popular for stereo in studios, surround just made self-powered loudspeakers all the more practical. While a few models exist for the home, the market seems to have settled for now on behemoth receivers with five to seven channels of amplification of around 100 W per ch., and speaker wiring everywhere. Have you picked up one of these things recently, or found a shelf for it? I think as time goes by, and the benefits of bi- and tri-amplification become better known, that power amplifiers will naturally move towards the loudspeakers, even at home. Processing MIPS will go up in the loudspeakers, and they’ll become more sensitive to their installation. More efficient Class D amplification will finally come into its own as the loads are completely known in a self-powered loudspeaker (a problem for a general purpose design of Class D). Connections to these loudspeakers will be optical or RF, thereby eliminating all potential for ground loops.

Sources will provide more channels. Metadata that we call our Rosetta Data Block will be used to scale the channels on the medium to the available channels of the sound system, from 2 for headphone listening, through today’s 5.1-7.1, to tomorrow’s 10.2 and beyond.

The tradeoff among bandwidth, dynamic range, and spatial capability will come to be settled in the same way the conversion from mono to stereo was; audiophiles at the time complained that everybody would spend half as much on each loudspeaker, making the system worse, without thinking that this might make the system better, and, besides, maybe they’d allocate more funds for a better experience.

Probably the biggest single application area that needs attention today is the customer interface. The problems are huge both in studios and in homes. How many times have I gone into a professional environment only to spend 30 minutes getting a signal from point A to point B? Likewise at home, how many remote controls am I going to have to learn the quirks of? While fundamental audio is, of course, the reason for the existence of new media and improvements, they will only be widely adopted when they prove easy to use. Fifty years should surely solve this problem set, at least we’d better hope so.