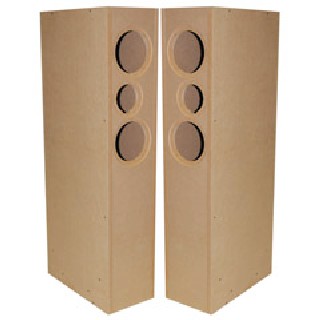 As those of you who read my speaker stands review are well aware I am no DIY master. So when the opportunity to build the Parts Express TriTrix Transmission Line DIY speakers with knock down box came along I was frightened for the future of both our magazine and Parts Express. (I was excited about the opportunity, so I didn’t share that little tidbit of information with the Parts Express guys.) If any of you are also curious what $225 can buy in the DIY Speaker arena these days, feel free to follow me through this journey as I stumbled through the saga.

As a bit of background, I knew that the TriTrix was on backorder and forgot to mention to my loving wife that a complete DIY speaker kit of unknown size would shortly be on its way. When it arrived unexpectedly 2 weeks before the back-ordered date the phone call at work was a bit startling. “What the heck did you buy, Madagascar has arrived on our porch!” After assuring her that it was a review sample, she was only minimally assuaged.

Fast-forward a couple of weeks while these stacks of boxes sit in my garage waiting for me to have sufficient time to get started. A project like this at least at my house requires a certain amount of planning to implement. The first step, for me at least, was to plan out how I was going to build the complete project. I decided to lay out the crossover, build the cabinets, then assemble the crossovers once I knew for certain where they would go in the cabinet.

About a week before I began working on the cabinet I brought in the little box containing the crossover parts. Here is where my I experienced my first disappointment. This kit contains no crossover building instructions or even a wiring schematic. Thanks to the wonderful Internet I was able to run down the schematics from the Parts Express project showcase. I could tell from the extremely small quantity of parts that the crossover must be a simple design, turns out it is one inductor and cap in the woofer network, and the same plus a resistor in the tweeter network. In my opinion, this incredibly simple crossover is part of what makes this an excellent beginners kit.

While I have quite a bit of experience with electronics and soldering from my Army days, I don’t think everyone will be so fortunate. To assist those less skilled and in an attempt to show that really anyone can do this very affordable project I have taken the liberty to run down some resources for those who can’t solder or read schematics. First off you will need to know how to read a schematic, think of it like a road map to your finished crossover then read the following article by The Reverend Wayne Jaeschke, one of the DIY speaker masters. http://www.speakerbuilder.net/web_files/Articles/constxo/xoconst.htm

Next for a tutorial on soldering: http://www.epemag.wimborne.co.uk/solderfaq.htm 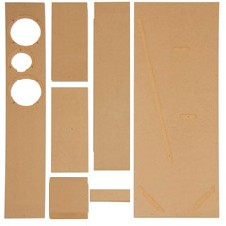 I would recommend cutting up 6 pieces of wire and soldering them into together using the above tutorial. Soldering isn’t the only option for connecting a crossover, it just happens to be the most common. You are welcome to use a series of terminal blocks, a wire crimping tool to attach the various components, or even very small wire nuts. Soldering is the most commonly accepted method, and likely the most permanent. As long as the various parts are electrically connected as the schematic maps out the connection method is somewhat irrelevant.

Cabinet Construction was pretty straight-forward. The instructional video as well as the manual that was clearly taken from the video, were all very helpful. It took me approximately an hour to build the first cabinet and only half that time to get the second one together. This procedure was reasonably logical, though the pieces really should be marked with the numbers used to identify them in the instructions. I mixed the top and bottom panels up on my first cabinet, so some additional sanding was required to repair that error. In the end it isn’t visible. Just so you know the slightly smaller panel is the top and the slightly longer one is the bottom.

The cabinet came pre-drilled for Hurricane Nuts in all of the driver screw holes. The kit did not include machine screws to match these nuts, it seems that should have been included or at least listed in the recommended components listing on the website. This was another oversight that stumped me for a short period of time, exactly what size machine screws would I need to get. I found a posting from Jeff_S (President of Parts Express) in the forums that said they were a 8-32. That quandary paused my progress a bit. As it turns out, machine screws are not often available in black. There are security screws available from Parts Express, but an additional key is required to use them. I found flat black 8-32 screws at Lowes, they are small Allen headed screws. They do not protrude from the woofers, but they do stick out a bit on the tweeters. This is acceptable to me, you may want to buy what is available from Parts Express just to simplify things.

After the cabinet was assembled and the driver mounting hardware were worked out I moved on to crossover assembly. The recommended first step is to mount all of your larger parts to a backboard and lay out he components so they best fit in the desired space. Of course I didn’t follow my own (or the various books and websites) advice. I jumped in to the soldering with both feet. Keeping with the budget constraints of the project I used Cat-5 cable for the internal wiring of the speakers. During the soldering I made sure to give myself plenty of wire between woofer and tweeter sections of the crossover to ensure the would mount nicely on the neatly cut Amazon.com cardboard box top flaps. I then mounted the inductors first, since they were by far the largest components. Using the advice from Speakerbuilder.net I kept them as far as part as possible on my box flap. Also following The Reverend’s advice I mounted one of them flat and the other sideways. I mounted these parts using two heavy zip ties each. The capacitors and resistor were mounted using hot glue. Since I had spent time earlier in the project studying and mapping out the crossover the actual construction was pretty easy. It really seemed like I had done it a hundred times in my head. 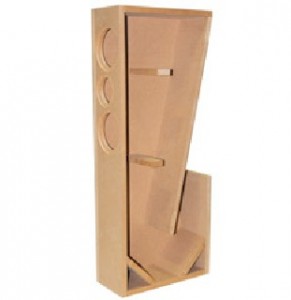 I ran insanely long wires from the crossover to connect to the speakers, and in hindsight I should have dropped them in to the box and worked and attached them from there. Not having that level of foresight, I dropped another length of cable down the speaker holes in the box to fish my wires up. (Sometimes, I wish I was the DIY master, my life would be so much easier. But maybe not as much fun?)

I had originally planned to connect the speakers using crimped female terminals. It turned out I didn’t have as many of them as I thought. So out came the soldering iron again for a more permanent solution. In not time flat I had the three driver of the first speaker completely miss-wired and almost mounted back in the cabinets. It was then that it occurred to me that the nature of this crossover didn’t have positive from the crossover to positive on all the drivers, the woofers are run in series. So I pulled out my trusty de-soldering wick and de-soldered 3 of the four woofer connections. Once again if I hadn’t spent so much time studying the crossover I would have missed this. I don’t have the slightest clue what the result of this mistake would have been, but I’m not sure I want to test it on any of my amps.

Part two of the review will be the beautification and breaking in of the TriTrix This will also include the final listening tests. As far as building the speakers the project can easily be completed in two weekends. The only reason why it can’t be done in a single weekend is the drying time required for the wood glue on the cabinets. The cabinet construction and crossover construction can be done in a single Saturday and Sunday with no trouble at all. Before paring the two construction projects and adding the drivers you really should wait 48 hours to allow the wood glue to setup on the cabinets. In my particular case this meant waiting until the following weekend. I knew I would be taking the system apart to finish the cabinets later, but I really wanted to hear my creation and begin the speaker breaking process.

If all goes according to plan (like that ever happens around here!) I will be posting part two of the TriTrix DIY project in the October issue of A$$A. Until then, go out and order yourself a cool kit and see what you can mess up, just like me! In the words of the Canadian Red Green, “If women don’t find you handsome, they should at least find you handy!”

Tags: Do It Yourself, Parts Express, Speakers, TriTrix