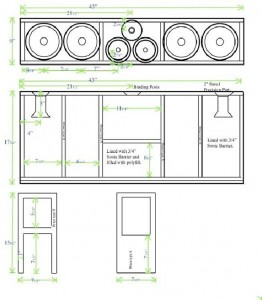 The center channel speaker is the most important speaker in a home theater setup because it carries the majority of the sound and all of the dialogue. I realized several years ago that the typical MTM center channel configuration, regardless of brand or cost, was inadequate for conveying the richness of HT. This is particularly important with bass. Most center channels are rated at 50Hz or higher. That’s not good enough.

I believe a great center channel should hurl bass all over the place. Here’s why: the value of implementing an HT system is to replicate, to the extent possible, the “you are there” phenomenon. You want to be part of the action. If a gun shot goes off, it should sound realistic – just like you are in the scene alongside the actors. In other words, the sound should have plenty of bass in order to be as impactful and as dynamic as possible. Sorry, folks, but that ain’t gonna happen with a wimpy center channel. The center channel should be the second biggest, baddest speaker in your HT arsenal (with your subwoofer being #1).

With that said, I wanted to build the king of all center channels. Of course, no store or retailer had what I was looking for. Fortunately, with a tip from a fellow
audiophile, I stumbled upon the Dynamic 4CC kit and quickly placed my order.

The designer of the Dynamic 4CC is Jed Kunz, a prolific DIY speaker designer with award winning designs. Check out his website: http://clearwaveloudspeaker.googlepages.com/

Jed is obsessed with trying new driver combinations and the latest products to bring the listener closer to the real event. He has designed many speakers for free at various DIY speaker boards and his designs have become very popular. However, Jed’s recent adventure in audio is with the introduction of custom DIY speaker kits and design service. His goal is to offer very competitive pricing for products so the community can continue to benefit from cutting edge products without the huge mark-ups. He is also working closely with a local cabinet builder to offer finished speakers.

Currently, several speaker kits are available on the website, including the Reference Series monopole Duet10 3-way that uses state of the art drivers. There is also the Dynamic Series which feature drivers that represent a bargain at their respective price points. All of these designs are unique in their presentation and preservation of the signal.

The Dynamic 4CC features a Vifa XT25 double magnet tweeter, two Tangband W4-1337 titanium dome midranges, and four Dayton RS180 woofers. The kit was priced at $472; I spent another $150 or thereabout on MDF, sound dampening material, and other supplies.

My woodworking skills suck, so Ben, a friend and audio tinkerer, did most of the tough stuff (http://www.bwaudio.net/). Ben volunteered his time and expertise to this project. We spent an entire Saturday (12 hours actually) building the Rock Box (that’s the name I’ve affectionately given my center channel). He was just as excited as I was to get started on the project, and we both shared in the exhilaration of its completion.

I made one approved modification – the original design is 42” in length but the Rock Box is 48”. I wanted to make it longer to fit the length of my TV and to get a bit more bass. This brought the box down a bit to 36 Hz and, of course, with room gain we’re looking at the very low 30’s. The dimensions are approximately 48”L x 16”D x 9”H. Two 2” ports are on the back along with a set of high quality binding posts.

When I first received the kit, I was struck by the sheer size of the crossover. The crossover weighs in at a beefy 4.2 pounds and is built point-to-point on a 5.5” x 9” MDF board. (By the way, the drivers, crossover and other parts weigh about 35 pounds, which is the entire weight of a typical center channel speaker. The Rock Box probably tips the scales at around 100 pounds.)

We decided to finish the speaker with Formica instead of paint or wood veneer in order to save time and to make it more durable. This speaker has to bear the weight of a TV, and paint or veneer would be more vulnerable to dings and scratches. The Formica looks like granite, hence the name “Rock Box.” We also cut another corner by not flush mounting the drivers. In addition, we did not build a grille because the Rock Box looks sexy enough without it. Oh, I almost forgot – we placed the crossover behind one of the woofers instead of the sealed enclosure behind the tweeter/midranges where it was supposed to go in order to access it once the cabinet was sealed. Luckily, this was a good move because we needed to make a minor tweak to the crossover after the enclosure was assembled.

The cabinet is constructed of ¾” MDF with a 1.5” baffle. There are four braces. As always, the challenge is making straight cuts and getting everything to fit perfectly. Of course, having all of the necessary tools is important, too, and

Ben and I had most of what we needed. Once the Rock Box was maneuvered into position, I placed a set of isolation pucks underneath it so it wouldn’t rest directly on the fireplace hearth.

Once we completed the build, he hooked it up to his system and we were astonished at the sound. Our jaws dropped simultaneously the first time we heard it. It was very powerful and clear with an enormous soundstage. We were very impressed and I was anxious to get it home and hook it up to my system. Since the speaker weighs at least 100 pounds, I couldn’t tuck it under my arm and walk out the door. We had to use a hand truck to move it.

When I got it home, my wife was waiting for me. She loved the look of the Rock Box and had no problems with it being naked in the den, although I prefer a grille, particularly for times when children are in the house. They won’t be able to resist touching the shiny midranges, phase plugs, and Vifa nipple.

Anyway, we spun Sarah McLachlan’s live acoustic CD and I had to put my ear against the front speakers a couple of times to make sure they were not on. In spite of the center channel being horizontally placed near the floor, the sound rivaled my beloved 2-channel system. The soundstage, detail, and tonal quality were the best I have heard in my home. Period. That’s with one speaker with music being played on a DVD player and powered by a multi-channel HT amp!!!

The music was seamless and it was surrounded by a breath of fresh air. In fact, I was so excited that I called Jed and thanked him personally for designing such a great speaker. In addition, I’m entertaining the possibility of purchasing the Dynamic 4T kit and build the floor standers to complement the center channel. That’s how good it sounded.

OK, so how does it sound with HT? We watched the Dark Knight and let me tell you – it was, by far, the best HT experience we’ve heard. The front soundstage was astonishing. The value of a 4-foot long center channel speaker is its ability to project a wider sound, thus making the front stage appear as one speaker, not three. This provides a greater sense of the “you are there” thing I talked about earlier. More importantly, the dynamics and impact are off the charts.

The center channel is much more important than most people realize. Let me offer an analogy. When you print in color on your inkjet printer, the black ink is used to create many of the colors. If you remove the black ink cartridge and print in color, the colors will be pale and lifeless. Similarly, a center channel anchors the sound – it aids in the production of sound from all of your speakers. For instance, when the rear speakers fire, they often get assistance from the center channel. When the Rock Box was introduced, it not only improved the sound coming from the center, but the entire system was greatly enhanced. My system doesn’t sound like it’s attempting to emulate the movie theater experience anymore. It IS the experience.

There is tremendous value in pursing a DIY project. Consider this: 100% of the cost of this center channel went into materials. Contrast this with a product purchased from a retailer where about 10% of the cost goes into materials. The other 90% of your money goes to pay salaries, middlemen, marketing, overhead, profit, etc. Therefore, if you pay $300 for a DIY project, it could conceivably retail for 10 times what you paid, or $3,000. Plus, with a DIY design, you are likely to purchase higher quality parts and you have the benefit of customizing it any way you like. As budgetconscious audiophiles, we should be interested in DIY for two very important reasons – the cost is quite compelling, and if designed properly, the sound quality can be extraordinary. I would highly recommend that you explore the DIY route for your next set of speakers. If you do, check out Clearwave Loudspeakers and prepare to be blown away. You’ll forever scoff at retail speakers.