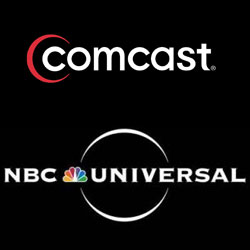 This deal gives Comcast 51 percent of NBC Universal with GE retaining 49 percent of the network. It was approved by the FCC nearly two weeks ago in a 4 to 1 vote.

As Seth Meyers, of NBC’s Saturday Night Live’s Weekend Update, said: “This week, Comcast officially took control of NBC Universal, and I have to say things are better already … Seriously, I have to say that.”.