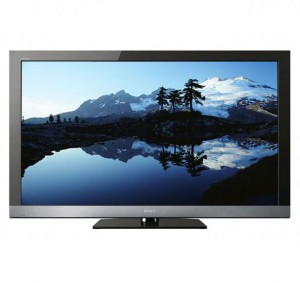 With the Pro Bowl now just a memory and the Super Bowl staring us right in the face, you’ve still got some time left to get your hands on a new television ahead of that biggest of games (at least as far as football goes). Thus, this week, we’re going after the low-hanging fruit, the most abundant of models–and often the least expensive–the LCD television. We kick off our week with the Sony Bravia KDL46EX500, which is going to really impress both you and anyone you have over for the big game.

The Sony Bravia KDL46EX500 is a forty six inch 1080p LCD television that offers Motionflow 120Hz technology to cut down on blurring by bumping the frame display rate up (most televisions operate on a sixty hertz cycle–Motionflow ups that to one hundred twenty), LightSensor technology to change the brightness level based on conditions in the room, Ambient Sensor systems to change other settings to match conditions, the Bravia Engine 2 image processor, two ten watt speakers with simulated surround, 24p True Cinema display mode, a variety of video modes, four HDMI ports, two component inputs, two composite inputs, a PC input, a USB port, and an optical digital audio output.

I’ll say right off that I found the picture on this one pretty impressive, especially for an LCD television. Granted, it’s no 3D LED, but it’s still pretty nice indeed.  It’s also somewhat dismaying to see that there’s no internet connectivity here, which is steadily becoming more of a requirement. But still, this plays equally well with old and new hardware, and is great for someone trading up from an old television.

The going price for this one (or so I found at four different places) is eight hundred ninety eight bucks, which is a little on the healthy side for a forty six inch television, but still mostly in line.

If you want a big, impressive new television for the Super Bowl, take a look at the Sony Bravia KDL46EX500, a television that should keep you front and center on the action.