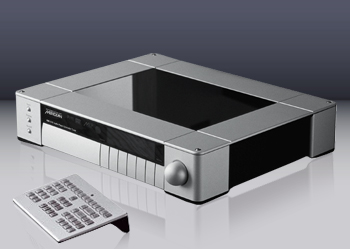 Dubbed the G91A, this new edition of Meridian’s G91 DVD Video and Audio player goes beyond the features of a player and is now dubbed an “all in one” player, controller and tuner. In addition to being a DVD Video and Audio player, it also includes an AM/FM RDS tuner (in model G91A) or a DAB FM Digital Radio Tuner in markets with DAB services (with model G91A-DAB) and a 2 Channel preamplifier.

Meridian also notes that the G91A features both Analog and Digital Multichannel outputs that are compatible with the firm’s G68 Surround Sound processor for those who want more extensive 5.1 Surround Sound features than the G91A provides.

On the video side, the G91A has 3 S-video inputs, 2 composite video inputs and an external component input. The unit’s video processor converts video input signals to S-Video, Composite and Component Video as well as offering HDMI output. This includes video output up to 1080p.

Support for Almost All Formats
Meridian’s announcement of the G91A notes that it “plays almost all CD and DVD format discs”. This includes support for a variety of formats including Audio CDs, MP3 CDs, Video CDs, DVD Video and DVD Audio discs.

In addition to these formats, the Meridian G91A also offers partial support of Super Audio CD and Dual Discs as well. The G91A spec sheet notes that the player can play the “CD Layer Only” of Hybrid Stereo and Surround Sound Super Audio CDs as well as the “DVD Layer Only” of the two-sided Dual Disc format which has CD Audio content on one side and DVD content on the other side.

Availability
The Meridian G91A All In One player is shipping to dealers now and replaces the company’s earlier G91 player product. It carries the same list price ($7,695) as the earlier edition.