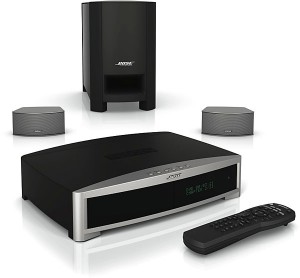 Ordinarily that would be sufficient review for most anyone. But of course you don’t come here for general pronouncements like that, so today we’re looking at the Bose 3-2-01 GS III, a home theater system that will patently blow your mind. In fact, about the only thing you can say about it that can be construed as bad is that it won’t be quite as mind-blowing as some other Bose systems.

As is generally the standard with Bose, the sound quality coming out of two little speakers is intense.  It’s actually slightly less intense than some versions I’ve heard previously, but still–definitely intense. And of course it’s fairly simple to work with–there aren’t that many components involved in the package to be that complex.

The down side here, as is generally the down side with Bose hardware, is the unsettlingly large price tag. Best Buy wants fully a thousand bucks for this system, but Bose system always costs.

In this case, though, I’d say save up for a little while longer and pick up one of the other Boses that have some more juice behind them.