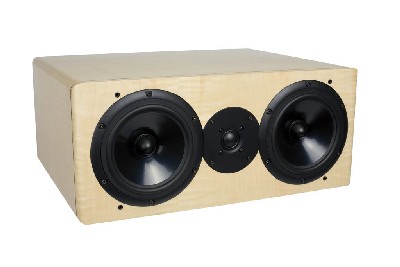 AV123 is a company that should need no introduction to Affordable$$Audio readers. Helmed by Mark Schifter (a champion of quality, budget audio since he founded Audio Alchemy back in the early ‘90s), a number of AV123 products have graced the virtual pages of our humble ‘zine, consistently receiving glowing reviews.

The latest shot fired in Schifter’s long-running battle to bring high-class audio to the regular working stiff is the x-series, a group of speakers and (someday) electronics designed to “redefine excellence in the budget class with every product”. I reviewed the first “xproducts” (the remarkable x-ls bookshelf speaker and x-sub) back in May and found that they did just that…at $200 each (at the time…the x-sub is still $199, AV123 has added grills to the x-ls, which now run $219) they sound way better than they have any right to, keeping up with, and often surpassing, products twice their price. I ended up buying all four of the x-ls speakers AV123 sent me, and they have been living happily in my home theater ever since.

The x-cs is the third product available in the xseries, a center channel speaker to match the x-ls. Looking something like a pair of x-ls Siamese twins joined at the tweeter, it uses the same drivers, the same gorgeous (and beefy) cabinetry, and the same father: speaker design guru Danny Richie.

I’ve never felt the need for a center channel in my home theater. My room is small (about 13×13 feet) and with mains that image as well as the x-ls, a perfectly believable “phantom” center emerges…why add another box? I was most interested in trying the x-cs out in my 2-channel system, turned on end in an MTM alignment. A pair of x-cs runs $278, just $59 more that the x-ls. I figured this could be an especially cost-effective upgrade over an already excellent speaker, although I was surprised with what I ultimately found. Not to be a total tease, I will tell you that I’m buying the x-cs. It rocks! It’s just not ending up in the room I had originally intended it for. For the details, you’re going to have to read on…

The first thought I had after removing the x-cs from its double-boxed shipping container was, “Holy cow! These things are huge!” At 15.5” deep and 20” wide (or 20” tall, depending how you set them up) the x-cs are larger even than the x-series subwoofer, and heavy (33 lbs. each). Clearly, this is not a center channel speaker designed to be casually set on top of your TV1. Build quality is what I expected: solid (they passed a quick “knuckle rap” test, although not with quite as much confidence as their smaller bookshelf cousins) with the same gorgeous veneer as the x-ls. The Shadow Maple was a close-but-not-exact match with my x-ls, a normal bi-product of the natural variations in real wood.

I ran into a few QC issues with the x-cs. After break-in, one of the main drivers developed a clearly audible rattle during heavier bass passages (the drivers are tested before shipping, I suspect rough treatment in transit may have knocked the voice coil slightly out of alignment). I was given the option to receive an entirely new speaker, or a new driver to swap out myself. Being a wannabe DIYer, I opted for the driver. 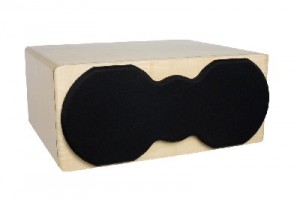 Then, after about two months of having the x-cs pair in my system, I concluded that they were a tad darker than the x-ls…not enormously so, but more different than I expected for a speaker that was supposed to be a sonic match. Turns out AV123 had received a batch of out-of-spec tweeters from their supplier, two of which resided in my pair. I sent them off to Danny Richie for testing and tweeter replacement and he confirmed that the tweeters that had originally shipped were between 1 and 1.5db below spec. With that resolved, I was able to start my listening evaluation for real2.

As expected, the x-cs share all of the favorable sonic character of the x-ls. Check out my May, 2006 review to get the details of what that is, but I’ll recap it here: non-fatiguing, easy to listen to, transcendently musical, and higher-fidelity than seemingly possible for the price.

On paper, the sealed x-cs have less bass than the rear-ported x-ls (-3 db at 65Hz to the x-ls’ 55Hz), but in room the x-cs bass rolls off more gradually, so they really don’t sound very different in the low-end. Of course, crossed over to a subwoofer at 80Hz, typical of most home theater receivers, the difference would be nonexistent.

Also on paper, the x-cs are greater than 3db more efficient, and this begins to explain the biggest improvement the x-cs has over its twodriver cousin. Less amplifier power is required to get the x-cs up to good, reference levels, but there is more: with twice as much cone area, each woofer only need work half as hard to deliver the same volume level as the x-ls. Of course, this means the x-cs have a much higher total volume capability, which makes all the difference in large rooms, or for those of us who like to listen at visceral levels. My room is about 13 by 25 feet, and I found that the x-ls hit their limits just a bit before my eardrums playing AC/DC’s Back in Black at good, rock ‘n’ roll levels. Not so with the x-cs…they took all I could handle giving them, and seemed to beg for more, delivering the music as cleanly as I could ask for.

That’s not to say the x-cs benefits only the rocker. Doubling the cone area reduces distortion even at sane volume levels, as evidenced by the Beethoven String Trios (Giuranna/ Mutter/Rostropovich, Deutsche Grammophon #427687), which sound fabulous on the x-ls, but playing them level-matched on the x-cs revealed a slight increase in the audible space between the musicians.

A paltry $59 more than the x-ls, the x-cs would be a slam-dunk choice if it weren’t for one thing: their size, and that they absolutely require solid stands to sound their best. I first had the x-cs perched atop AV123’s x-ls LaunchPad Speaker Stands ($140). These perform perfectly well with the x-ls, which bolt neatly to the 7” x 11” top plate. They were entirely wrong for the x-cs, however, which not only hung precariously off the front and back of the stands (making me nervous whenever one of my kids went near them), they made the soundstage shrink to a blob well between the speakers. I might have thought the x-cs were capable of no better, but on a lark on tried them on the Ascend Acoustics TP-24s (the dedicated stands of the Ascend Acoustics CMT-340, which I reviewed in April)… simple MDF boxes, but only 24 inches high and rock-solid when filled with 50 lbs. of sand. Placing the x-cs on the Ascend stands opened them up considerably, expanding the soundstage to a level much closer to what I had grown used to with the x-ls. 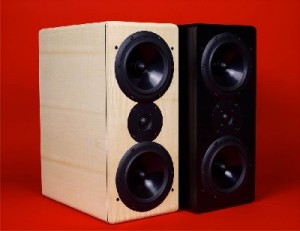 In the interest of being thorough, I installed one of the x-cs as a center channel in my home theater. Here their girth wasn’t nearly the liability it was in my 2-channel system…it actually fit quite neatly on a shelf beneath our TV, and the sealed design means that placement inside an audio rack or wall unit doesn’t muddy up the bass. What shocked me most, however, was how adding a center channel transformed my system. I learned that, in most 5.1 soundtracks, the most important stuff is reserved for the center channel (dialogue, lead soloists, etc.) and having it delivered clean and a bit louder than the rest is a big plus, and the x-cs does an amazing job at it.

One of my favorite 5.1 discs is Pink Floyd’s Dark Side of the Moon multi-channel SACD, but I’ve always found that the lead instruments (David Gilmore’s guitar and the female lead vocal on “The Great Gig in the Sky” in particular) were too far back in the mix for my taste. Well, that was on 4.1. With the x-cs installed as a center channel, everything is right: Gilmore’s solos cut right to the forefront of the swirling din of surround sound effects.

Much of the benefit of having a good center isn’t just what it does, but what it frees up the mains to do. This was evident on the Talking Heads’ Stop Making Sense DVD, which offers two completely different 5.1 soundtracks (one each from band members David Byrne and Jerry Harrison). With the x-cs in place, a good deal more of the natural hall ambiance was revealed. During “Heaven”, Byrne’s vocals are on the center channel and backing vocalists Edna Holt and Lynn Mabry float ethereally on the left and right mains, making my dinky home theater room sound like a cavernous performance hall.

I spent some time comparing the x-cs to Ascend Acoustics’ CMT-340s ($568/pair) back in the 2-channel world. The Ascends outperformed the x-cs in just about every technical area: more efficient, deeper bass, airier highs, with more inner detail in the midrange. A-B comparisons revealed a slight muddiness in the lower midrange on the x-cs compared to the 340s. But hey…the Ascends cost twice as much as a pair of x-cs, they should sound better. I still hold that the x-cs keeps up with (or surpasses) most any speaker twice its price, but the CMT-340 is another speaker that keeps up with (and surpasses) most any speaker twice its price. What we have here are two excellent choices for the beerbudgeted audiophile, one a Heineken and the other a Hamm’s.

That said, there are reasons why some listeners might choose the x-cs even if they can afford the CMT-340s. They are more forgiving of poor recordings, and they present music in a way that is consistently enjoyable and engrossing. I own and absolutely love the Ascends, but it could be said that the 340s are better at presenting the recording, while the xcs’ strength is in portraying the music. These things suck you into the performance in a way that makes them difficult to turn off…I’ve listened to them for hours without fatigue and with nary a thought of upgrading.

$139 each is an amazing bargain for a speaker of this quality. Without question, the x-cs continues the x-series “tradition” of high value, over-achieving audio components.

If you have the x-ls in a home theater system and you’re looking for a center channel, look no further. This is quite possibly the best $139 improvement I’ve ever made to my system…there’s no way AV123 is getting this thing back, I’m buying it.

For 2-channel use, the decision isn’t quite so clear cut. The x-cs deliver awesome sound, and are built to a level worthy of a lot more scratch than what AV123 is charging. However, the challenges of stand-mounting such a large, heavy speaker mean that using the x-cs as mains is not for everybody. Also, AV123 has just released two more x-speakers, with more on the way later this year. Among this month’s batch is the x-mtm…essentially the same speaker as the x-cs but in a ported, floorstanding cabinet capable of delivering bass to around 40Hz, and no stands are required. It seems that AV123’s biggest competition may well be AV123 itself.

from aﬀordableaudio,  By Clarke Robinson