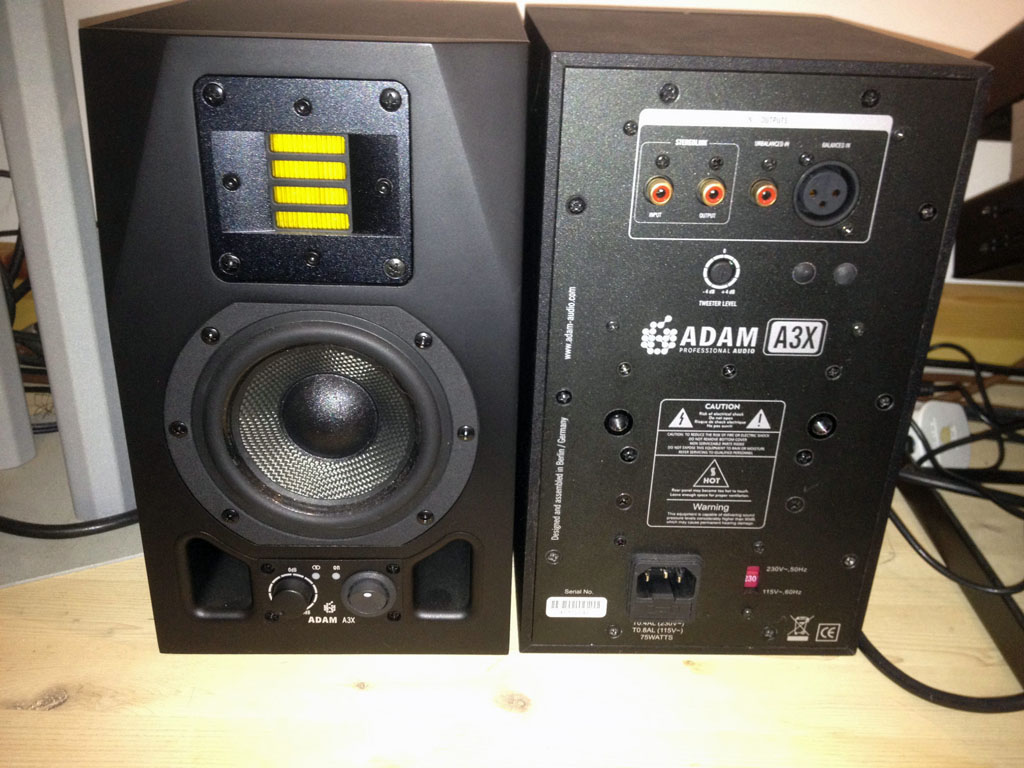 The reality of many modern home/personal studios is that there’s not a lot of room for large speakers. With that in mind, ADAM Audio introduces the A3X closefield powered monitor ($299 each, street). The A3X is ADAM’s smallest speaker ever and the least expensive of their affordably priced product line, the AX Series.

With dimensions of only 10 by 6 by 7.5 inches, this attractive, two-way ported active monitor carries on ADAM Audio’s tradition of using a ribbon tweeter. Called the X-ART (Extended Accelerated Ribbon Technology) folded ribbon, it helps push the A3X’s overall frequency response from 60 Hz up to 50 kHz. Can I hear that high? Absolutely not! But that’s what is listed in the specs.

A3X has two separate 25-watt amplifiers: one for the woofer driver, one for the tweeter. It features a 4.5-inch basket driver with a carbon fiber diaphragm and dual ports on the front, the latter of which is unusual for a monitor of this size. Also on the front is a power/on button and volume control; the upper corners are beveled to minimize diffraction.

On the rear, XLR balanced and RCA unbalanced inputs as well as a unique RCA Stereolink are provided. With the included mono RCA cable, you can connect both speakers together and use a single volume control. While most studios wouldn’t use that feature, they could; as the manual states, it is useful when running a mixerless desktop setup. ADAM also wisely included two M6 (6mm) metric screw threads for wall/stand mounting.

On the rear there is a Tweeter Level adjustment, which varies the gain of the entire tweeter level +/- 4 dB. According to the included frequency chart, the crossover is around 1 kHz, so it will have quite an effect on the overall sound, thus should be used with care.

ADAM Audio A3X In Use

Working on some TV cues with d rummer/ampl i f ier designer Vincent Miraglia, we were both surprised by what we heard from these diminutive speakers as we fired them up with his Avid Pro Tools LE/003 rig. The A3X pair was much more “in your face,” present and louder than the monitors I normally use and have used for almost 10 years now, a pair of NHT M-00 powered nearfields. Sitting in the sweet spot while I stood in the back of the room, Vincent motioned his hands in all directions, indicating they had great width, height and depth to them. 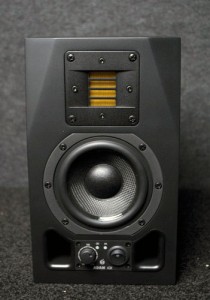 In further tests at home on my Pro Tools TDM system, I discovered these monitors are very efficient, almost 5-6 dB louder than my other ones; this, in part, helped to explain that initial sound difference upon first listen. So I placed a new A3X on the right, and my monitor on the left, level balanced. Panning many tracks in Pro Tools — from drums and guitars to vocals and reverb sends, I could hear the A3X’s clarity and punch. They were much more forward sounding: more “in your face.” I also listened to a lot of music on them: everything from Seal, Miles Davis and Madonna to Los Lobos, Led Zeppelin and classical selections.

The A3X is a different kind of monitor than those to which I am accustomed; I mean this in neither a good nor a bad way. They can be best described as super “present” with tremendous projection and smoothness in the highs and mids. I also felt there was a slight low/mid bump, and I checked this with and without my subwoofer. I feel this sonic characteristic is due to the inherent nature of a small speaker cabinet with dual bass ports; their size prevents them from projecting a full bass response, even though they are rated down to 60 Hz. It is my belief that the A3X pair sounds best when combined with a subwoofer that can properly and efficiently push out the bottom end. That’s not to say they don’t sound good alone; they certainly do. But for any type of critical monitoring, you should really use a subwoofer with the A3X. [Though we received no subwoofer from ADAM for this evaluation, company-published literature contends that its Sub7 powered subwoofer ($549 street) is ideal for use with A3X as well as with its series siblings, the A5X and A7X. — Ed.]

Finally, please note that the A3X is not shielded; be cautious when placing them near CRT monitors. However, I had no problems while the pair was next to my own computer monitor.

Overall, the ADAM Audio A3X is a fine speaker. This pair’s small size belies the smooth sonic footprint they project. I would recommend that potential users make sure to compare them directly with monitors they are already familiar with. That said, an A3X pair would be a great addition to any small home-studio/post-production setup in need of a high-end sound. The fact that they drive so efficiently means you won’t need a top-flight monitor mixer, either; this alone makes them an excellent purchase option.

by Rich Tozzoli, a composer, engineer/mixer,