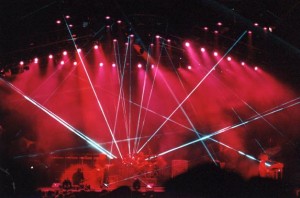 It’s probably an idea whose time has come.

We all know how the home theater generally beats the movie theater, so far only losing out in terms of available first run content and the amorphous “theater experience”, but where things are likely to get interesting is the recent migration of the music concert to home theater.

Most of us have been to at least one concert in our lives, where it’s often crowded, smoky, dangerous and expensive, not necessarily in that order. So imagine the idea of seeing your favorite musician or group live, in concert, in your own home.

It’s already started, somewhat, but apparently Sony’s got a serious putsch on to get more concerts migrated toward people’s home theaters.  Which is a pretty smart idea, really; you can go with a pay per view concept–the system’s already in place for that–or you can stream the video online, or you can go with DVD copies for sale or rent.  Or you can do like Sony’s doing and get it to movie theaters proper–they’ll be showing a Creed concert November 19.

I love the thought of being able to do more stuff from home–there’s no place like it, you know.