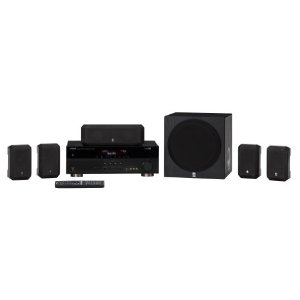 Yamaha usually puts out a good solid home theater system–I’ve seen more than a few of their receivers and I’m generally happy with them, but today I’m not so happy with the output on the Yamaha YHT-393, a system that seems to ask a bit more than it offers.

The sound output on this is pretty decent, and the control scheme isn’t too hard to pick up and learn.  By most standards, it at least qualifies as a good sound system, though I’m a bit concerned about the three hundred fifty dollar price tag on this out at Amazon.  If the sound quality were better and it offered more options I’d feel better here.  But I’ve seen good sound systems elsewhere for cheaper, and that always gives me pause.  The lack of a DVD player of any sort was also an issue, unless I missed it in the loadout lists.

But still, the Yamaha YHT-393BL is a fair if slightly overpriced system that isn’t bad, but isn’t really that great, either.