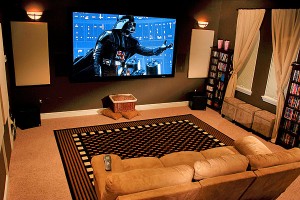 So I was checking out an image on Home Theatre Design sent by a reader who went to spectacular lengths to design and build his home theatre.  He used his position as an HVAC marketing manager to learn everything he could about the process of design and even became a CEDIA-certified designer just so he could get everything JUST SO.  And man, did he ever.

He’s got most everything you’d expect–an overhead mounted projector, a projection screen, speakers implanted in the walls, two couches for seating; he even had the room in question repainted chocolate brown to effectively maximize contrast. See, until I read that, I had NO IDEA that chocolate brown was the best color for a home theatre.  I’ll bet more than a few of you didn’t either.  That’s just spectacular, as far as I’m concerned.

The greatest thing about stuff like this is the sheer number of ideas it can give you for your own system.  In fact, thanks to reading about THIS setup, I’ve actually started looking at setting up my own home theatre in a different room than I’d originally planned.  It’s this kind of advice that makes looking at other people’s sweet home theatre setups a truly sweet idea.