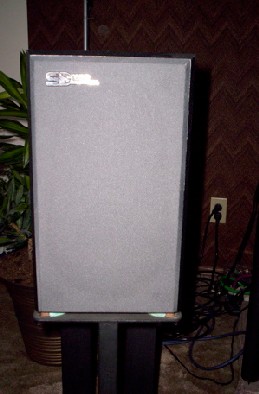 For those that don’t know the history of Canadian loudspeakers, API is one of the Canadian loudspeaker industry’s grand daddies (and PSB, a major competitor). Over the years they have purchased, and torn down many a great loudspeaker manufacturer: Paisley, and Sound Dynamics to name a couple. API operated these companies, and Mirage, ASM, and the Energy brands simultaneously. But as markets shrunk, and changed, API allowed certain brand names to die off. It had nothing to do with the quality of the products being produced. I don’t know this for a fact, but Klipsch did buy them and the company was “re-structured” and pared down to a more manageable three brands. The Sound Dynamics brand was a value leader and many a less than well-healed audiophile or enthusiast have been well served by these brands. Presently Athena Technologies occupies the value leader slot within API’s structure.

I must admit that I have never lusted after any of these speakers (other than a VERY brief flirt with some Energy Pro 22 ‘s from 1988 or so). Something always seemed compromised to me, and I never really had considered them. Maybe it was the beginning of my own form of audiophile elitism or “snob” attitude, but being Canadian and “settling for” a Canadian speaker seemed like I was compromising. It may have been my experience was less than great with the original series of Energy Pro 22 monitors—MT amplifier at the time was an inexpensive Yamaha one that, I’m sure now, wasn’t up to the task. In the years since, I’ve learned my errors, and realize the treasure that we have had available to us canucks. Thanks to the efforts of Floyd E. Toole et al, at Canada’s National Research Centre, and its acoustics division, our loudspeaker companies generally had an initial step up over their fledgling counterparts from around the globe. A while back I was walking through a local pawn shop and spotted these little buggers for the low, low price of $10. I couldn’t resist. I checked them out, they didn’t sound damaged and made their way home with me to meet the missus. The meeting went something like this, “not another pair of loudspeakers!”

Thankfully they are kinda cute (see the dimensions above), and wrapped in a high quality black/dark grey vinyl. Decent quality binding posts were included. The grills are a little rough, but what do you expect from 20-year old speakers? The enclosures themselves are in good shape with no gashes or damaged corners or panels. The drivers are not flush mounted (I think a nod to their “budget” design, most money into parts and a basic enclosure). Now of course it is well understood that flush-mounting drivers is beneficial. The 5-1/4” mid-bass is a typical-looking, small paper, foam surrounded one. The tweeter on the other hand appears to be cloth but impregnated with (or painted or dyed) a gold colour. The rear port is 1.5” in diameter and 5” long, suggesting a tuning of approximately 55Hz.

I’m going to try to adhere to a little more rigorous approach to listening notes and comments. I’ll still throw my off-the -cuff, non-technical remarks in too. And I’ll try not to say “just buy them if you find them” (but in this case you should). I’ve also come to realize that I actually prefer Celtic and/or “Tantric” music the most, whether sung by man or woman. There is something about the beat and the complexities of the music I savor. I still enjoy almost all forms of music (except bad country and ”death rock” or any music that seems to, at the least, encourage violence), but I find myself (at least recently) to reach for the Chieftains, Loreena McKennet, The Tea Party, Ravi Shankar, etc, more often. So I’ll consciously attempt to thwart my personal preference, but may make an occasional slip.

Bass, treble extremes and “balance”: These speakers exhibit pretty incredible extremes, particularly given the size of the enclosure. There is a slight midrange raggedness apparent in many cuts I tried, but you do have to listen for them (and know where they are) Midrange is generally well presented with a slight veiling , due mostly (I think from the surface mount drivers). I’ve listened to a lot more expensive speakers (based on their new price) sound a lot worse. I’ll list some of the tracks I listened to, and make comments in italics. I’ve used many of these tracks previously and won’t bore you to death by re-listing the albums, most are very obvious and easy to find, with no “audiophile specials” in the mix. 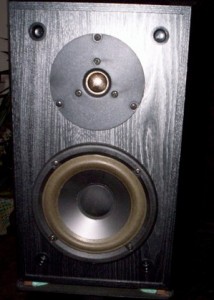 Michael Jackson: ”Billie Jean”, midrange seems pulled back, but detail is incredible. Bass has great speed and startling impact. “Way you make me feel”; midrange “suck out” is not readily apparent. Is it not as noticeable on Pop music? “Black or White”, intro is as credible as I’ve ever heard, the door being banged on by the kid’s father is pretty realistic. No sense of being “canned”. The bass is multi toned and moves. There is a little raggedness apparent in MJ’s voice, is it intentional? Depth cues are THERE on this album, width seems a little reduced compared to some full rangers I’ve listened to. Vincent Price’s voice in “Thriller” is sufficiently “creepy” enough.

Mary Black (The Very Best of Mary Black), one of the toughest voices to reproduce, methinks. “Last Call for Ellis Island”, there is a sweetness in her voice. I think the tweeter is very good. ”Only a Woman’s Heart” ,voices are homogeneous and well blended, but distinct. There is a slight metallic sound to the guitar—sounds like steel strings being played, but is it exaggerated? “Song for Island” tweeter seems to distort during the first crescendo, else very good—is it a crossover issue? Over all imaging and soundstaging is what I’ve heard on other speakers, perhaps sounding a little small in width. Could this be the lack of flush mounting?

Rickee Lee Jones (self titled): “Chuckee’s in love”: seems slightly veiled. Is it surface mounting of the drivers and edge diffractions? ”Night Train”, good acoustic guitar and double bass. I think I need taller stands for these, another 4-6” seems correct.

k.d. Lang (Women in Song 9): “Hallelujah”, (live JUNO awards recording): exactly as expected, no midrange suck out, no apparent tweeter or cross over problems apparent, slightly ragged, but a live recording and similar to other listening experiences with this song.

The Chieftains et al (Tears of stone): “Never give up the heart” –Anuna sounded good, quite spacious, can hear a slight tape noise in the recording (the first time I have). Delicate, but powerful sounding. “Lowlands of Holland”, Natalie Merchant sounds So S-M-O-O-T-H, actually the whole presentation does. Joni Mitchell in “Magdalene Laundry” sounds about as contemptuous as ever, and in my way of thinking, should. Dead Can Dance (Toward the Within): “Spirit Dancer”, huge sounding, sounds much wider and “taller” than the speakers could possibly reproduce. No apparent “boxiness” to the speakers sound. Slightly “shallow” or “flat” sounding

Loreena McKennet (Book of Secrets), : “Marco Polo”, striking considering the 5-1/4” driver. The top end is smooth, but is on the verge of irritating during some of the song, some veiling in the upper midrange (near the crossover frequency?). Overall, quite pleasant sounding.

So my thumbnail review: excellent value for the money (the newer Athena Technologies loudspeakers from API can be considered the Sound Dynamics’s spiritual successors). The bass is quite good and extended, the highs the same. The only comment or caveats that I can make concern the midrange. Either the crossover needs to be altered and the frequency moved up enough to take care of the apparent occasional raggedness, or the front baffle needs a plate to be added to it to effectively “flush mount” the drivers. One could try to use a router and create a dado to flush mount the drivers, But I suspect the enclosure walls are simply too thin to allow this.