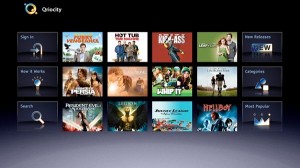 Sony had told us that their Qriocity on-demand movie service was coming around Thanksgiving, so three cheers for keeping their promises.

Launched over the UK, it is a debut of the European service that offers hundreds of pay-per-view streaming flicks to anyone with a network-equipped BRAVIA TV, Blu-ray player, or Blu-ray home theater system.

We’re told that the library consists of material from Fox Home Entertainment, Lionsgate, MGM, Paramount Pictures, Sony Pictures Home Entertainment, Starz Digital Media, The Walt Disney Company, NBC Universal and Warner Bros., with both new releases and heralded classics up for grabs. Rental prices for SD content start from ?2.49 for library content and ?3.49 for new releases, while HD content start respectively from ?3.49 and ?4.49.

Nice to know that Sony can keep a promise on this.