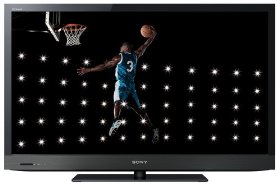 Today we’ve got another LED television on the dock for you, and from the good folks out at Sony to boot, which is going to make the Sony Bravia KDL46EX620 a truly interesting piece that will bring you some of the most current home theater tech and at a reasonable price to boot.

The Sony KDL46EX620 is a forty six inch 1080p LED television with a 120 Hz refresh rate, the X-Reality Engine for high quality image processing, streaming capability from a variety of sources (Netflix, Hulu Plus, Qriocity and Pandora are just some of the possibilities), support for Skype and wi-fi (you’ll need some extra hardware for that, though), Bravia Sync capability, LightSensor technology for automatic adjusting of brightness levels according to conditions in the room, four HDMI ports, a component input, two composite inputs, a PC input, two USB ports, and support for a varieyt of media playback systems.

It’s very much a do-it-all system, with plenty of room for old and new components alike, as well as support for the future improvements of streaming video and audio. The picture looks terrific–that 120 Hz LED helps tremendously, though I have, admittedly, seen better from the Bravia lineup–and the sound, while unimpressive, is fairly well standard for a television sound system.

And the folks out at Amazon want a cool (and oddly specific) $1168 for one of these, which is actually a much better price than we’ve seen in the past given what all it does.

So if you’re looking to get in on the new LED television experience but want to keep your bill for the total at least approaching reasonable, you might want to check out the Sony Bravia KDL46EX620.