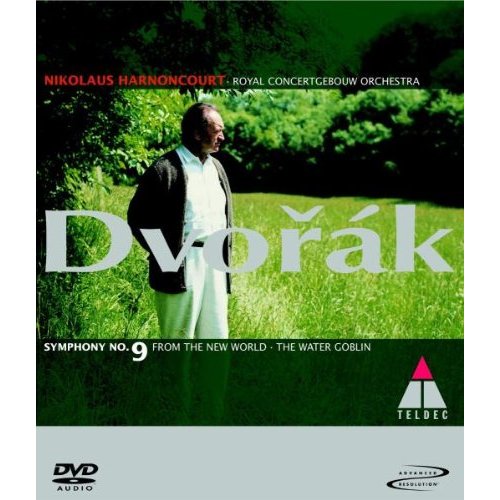 Symphony No.9 ‘From the New World’ – sometimes called ‘The New World Symphony’ is undoubtedly one of Antonнn Dvorak’s most recognised works. Like so many popular classics, excepts have been introduced to the masses via movies and television; readers in the UK will undoubtedly recollect excerpts from the second (largo) movement being used in an advertising campaign for Hovis bread.

Dvořak composed his seventh symphony in early 1893 whilst teaching at the National Conservatory of Music in New York. It is a work that draws heavily from Native American and black American folk music but there are Beethoven influences too; for example, Dvořak made no secret of the fact that the opening of the third movement draws heavily from the second movement of Beethoven’s Ninth Symphony.

The second piece on this disc is Dvořak’s ‘Vodnik’, or ‘The Water Goblin’, a lesser-known work that signalled his move towards the composition of symphonic poems, inspired by Czech poet Karel Jaromнr Erben. Penned during January and February of 1896, ‘The Water Goblin’ is a loose interpretation of Erben’s poetic ideas; the goblin’s anger, the underwater world he inhabits and a girl’s lullaby, all tied together by a central musical theme which runs through the entire piece, from the thunderous, angry passages right through to its delicate closing bars.

The Teldec ‘From the New World’ performance was recorded live at the Amsterdam Concertgebouw, a venue renown for its fine acoustics. The disc also features the Royal Concertgebouw Orchestra, a group of over one hundred accomplished musicians who, with more than one thousand recordings under their belt dating back to 1926, are certainly experienced in the art of presentation for disc. The same orchestra performs ‘The Water Goblin’, but in a studio setting. Neither piece is in any way affected by undue background noise, although the second piece does benefit from a slightly lower noise floor and less people murmurings.

Nikolaus Harnoncourt is no stranger to the Royal Concertgebouw Orchestra, he’s worked with them extensively in the past and has been attributable for some of their most acclaimed works, including Dvořak’s ‘Symphony No.7’, a two-channel Compact Disc also available from the Teldec stable. In fact, Harnoncourt has been involved in over three hundred recordings for Teldec, with whom he has enjoyed an exclusive contract since 1963.

In terms of musical presentation, interpretation and presentation, ‘From the New World’ could easily be described as flawless; from the light and shade of the cadenzas that ripple through the first movement of the adagio to the dynamic impact of the full orchestra, which in turn is interspersed with the gentle theme of the woodwind and the sweeping flow of the violins.

In the largo, which is the second movement, the Concertgebouw horns and violins combine to form the distinctive, gentle theme, conveying an imaginary scene of peaceful rolling countryside with consummate ease. Continued by the cellos and double base then swelled by the grandeur of the full orchestra, the ‘Coming Home’ theme is performed par excellence.

The scherzo of the third movement presents something of a shock to the system, its powerful notes are delivered by the orchestra with all the verve which Dvořak no doubt intended – if you drifted away to a blissful daydream state during the ‘Coming Home’ theme then the scherzo will bring you back to reality with a bump. The lilting violins that follow once again communicate a heightened sense of emotion, as woodwind, horns and percussion lend their pulsating, rhythmic vibrancy to the orchestra.

The piece closes with the fourth ‘Aleggro con fuoco’ movement, a theme introduced by the brass ensemble and reiterated by various instruments all of which are expertly drawn together until all the threads combine to a crescendo, delivered here with all the profound miscibility required of this great work.

Dvořak’s ‘The Water Goblin’ is a piece often overlooked by the average listener and one could be forgiven for thinking it would inevitably be overshadowed by the preceding excellent performance of ‘From the New World’. This assumption is quickly dispelled however; ‘The Water Goblin’ is performed with feeling and exactitude in the traditional manner and becomes a force to be reckoned with in its own right. There are delicate lilting phrases, interspersed with the raucous, sometimes menacing goblin theme, making for a work of contrasts both in terms of mood and presentation.

Throughout, Nikolaus Harnoncourt avoids the occasional ‘jazzed up’ timing introduced far too often into classical works by conductors who think it is the prerogative of a modern audience, which raises the question of whether one can ‘improve’ on the music written so precisely by the great composers of a bygone era. It is therefore refreshing to find Dvořak’s works conducted and performed to such a high standard.

A fine performance demands a fine recording, and as was the case with ‘StrauЯ in Berlin’, the Teldec team deserves high praise for their production. The Royal Concertgebouw Orchestra is captured with an outstanding level of clarity and realism, while the dynamic range of the disc, especially during ‘The Water Goblin’ will push the boundaries of even the finest playback system. Rumbling drums, at times combined with ominous strings demonstrate the potential musical force of a concert orchestra, but the loud passages are only half the story, in stark contrast one particular segment is barely audible, although well above the noise floor of the recording venue.

All six channels are used, but in a natural, convincing way. ‘From the New World’ captures the acoustic ambience of the Amsterdam Concertgebouw, which is conveyed by both surround channels. The centre is used to blend the front two channels together – more than just a simple ‘fill’ between left and right – which means that the front soundstage has a realistic quality, not too far removed from an actual concert experience.

As you can probably tell, the Teldec disc struck all the right notes with me. Well, almost. I do have one criticism. Also on the disc is a short passage from another Teldec DVD-Audio title, the aforementioned ‘StrauЯ in Berlin’, also reviewed within this site. If you do not intervene, the StrauЯ excerpt will be played automatically, immediately after the closing bars of ‘The Water Goblin’. They are gentle, string phrases, which slowly ebb into the distance, whereas the StrauЯ ‘Emperor Waltz’ excerpt is exactly the opposite; it’s loud and raucous, making for an alarming and undesirable mood-breaker.

Playback foibles aside, the Teldec Dvorak recordings on this disc are of the finest order, putting many other orchestral works available on DVD-Audio firmly in their place, not just because of the artistic mastery of Harnoncourt and the Concertgebouw, but also because of the outstanding recording itself. Wholeheartedly recommended.