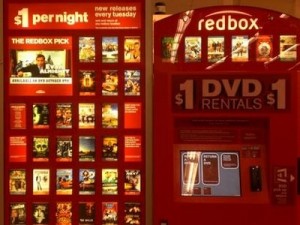 Now this is a chunk of news that should make Gamefly and every video store–brick and mortar video store, I mean–collapse into a screaming fit.  Seriously, this is “run out into the street, freak out, and kick puppies” news.

Redbox wants to make a push into renting games, or so the word goes.  That’s right–the company that’s already making studios howl bloody murder wants to bring its patented brand of angst and irritation to the video game community as well.

This in turn is a threat to every barely-surviving brick and mortar video store left, because as you’re all no doubt aware, about the only place to reliably get your hands on video games any more is from a brick and mortar video store, unless you happen to live near a Gamefly distribution center and can thus get your games with a faster turnaround time.  If Redbox manages to go this route, it’s going to kill a lot of video stores, especially the ones who were counting on being the only game in town on game rentals.

Will it come to pass?  I don’t know, but you know we’ll keep watching this one.