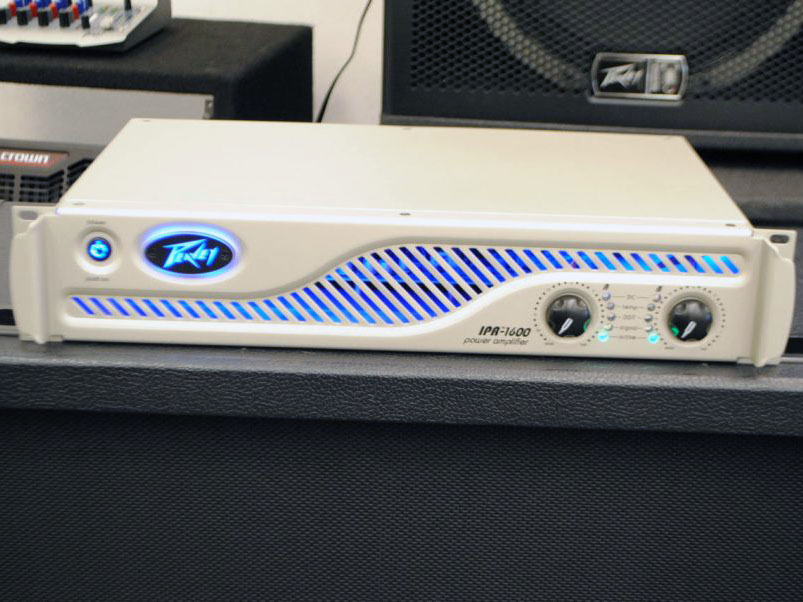 More power/less weight are seemingly contradictory, yet awe-inspiring, dual features that are increasingly found in the most innovative and surprisingly affordable modern live sound amplifiers.

Case in point: Peavey’s IPR 1600 — the entry-level model of its lightweight, lowcost, and most-efficient Class-D sound reinforcement amplifier line — is a 2-channel, 800W per channel (2 ohms)/530W per channel (4 ohms) live sound amp with a net weight of around 7 lbs. at $299 street.

The 2U IPR 1600 is enclosed in an incredibly lightweight aluminum chassis; it almost feels like an empty box. Despite that empty feeling, it provides the power as described above with independent crossovers per channel, a variable speed fan, sufficient I/O and Peavey’s own DDT speaker protection (Distortion Detection Technique, which automatically reduces gain “to prevent severely clipped waveforms from reaching loudspeakers” during intense use, as explained in Peavey documentation). 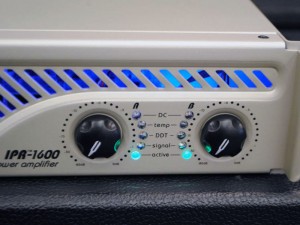 The front panel features two rotary input attenuators that are partially circled by a series of colored LEDs, five per knob: Active, Signal, DDT, Temp, and DC. Active (green) lights when the unit is on; Signal (blue) lights when a channel produces at least 4V RMS of output signal; DDT (yellow) lights with any clipping; Temp will only light under high temperature circumstances, shutting down the channel until the channel has cooled; and DC only lights under “abnormal operating conditions.” Finally, the unit’s Power On button glows blue at first, indicating that power is now connected to the amplifier, remaining on until this momentary standby mode is over.

On the rear panel’s left side, inputs include two combination XLR/quarter-inch jacks (for Channel A and B) plus two signal pass-thru quarter-inch jacks, one per channel. A toggle switch allows the selection of three settings: >100 Hz Hi-Pass Filter, Full Range, and <100 Hz Lo-Pass Subwoofer Filter. Channel A and B outputs are provided via Speakon connectors. 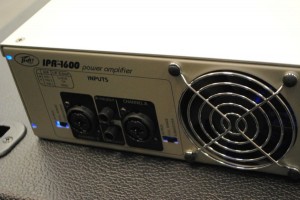 It was quite interesting to watch the reactions of peers when handing them the IPR 1600 to hold for a moment before connecting to a JBL MRX 512M pair in both stage monitor and mains applications. Most reacted with shock, saying something like “Wow, that’s a lot of power from nothing,” to which I would always agree. Performing as advertised in all instances, the amp delivered clean, good sounding audio with ample headroom via the MRX 512M pair, even when pushed hard.

The fact that the IPR 1600 simply delivered the necessary goods for basic gigging/small- to mid-level sound reinforcement work (without weighing nearly 30 lbs.) painted visions in my head of these IPR amps soon being all over the place, especially in the portable PA, small- to medium-sized club, and budget-restricted house-of-worship/theater markets.

Despite its lean physicality, the IPR 1600 is no lightweight when it comes to providing power for live sound applications where extra weight and cost are undesirable. And, to allow potential buyers to rest assured, their purchase of any Peavey IPR Series amp is supported by a five-year warranty. While there’s just no replacement for prograde, heavyweight tour amplification we’d all feel confident about banging around for a decade or two, I predict that Peavey’s innovation in providing power with less weight (for less money) will create many pleased customers in the near future.