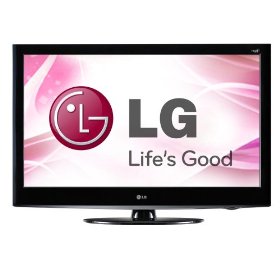 The LG 37LH30, I’ll say by way of preface, is mostly a high quality system with one strange flaw that I’ll be mentioning later.

But first, the technicals–the LG 37LH30 is a thirty seven inch 1080p LCD TV with Clear Voice and AV Mode technologies, as well as three HDMI ports and a USB port.

And I admit I was rather surprised, but I think something may have been off on the calibration on the model I was handling at the time, as there was a grainy quality in the picture that really shouldn’t have been there on a 1080p system.  The weird part was that this grainy quality only seemed to show up whenever the screen was showing light blue.  Stuff like the sky or a car or even a UN beret would develop bizarre electrical noise across its surface that almost made me feel like I was in that movie “Pulse” and something was going to jump out and strangle me.

But the controls are easy to use and the sound is fantastic, so maybe with a little extra engineering, this nine hundred dollar (depending as always on where you shop) may be just the system you’re looking for.