What weighs 21-lbs, takes up two rack spaces, and outputs 2,400 watts? If you said the dope I’ve been smoking, you’re off the mark. It is the QSC PLX-2402. The 2402 combines a high-efficiency class H amplifier with a QSC’s “PowerLight” switching power supply. Earlier attempts at power amplifiers with a switching power supply were greeted with a less than an enthusiastic response, as the power supply typically sampled at little more than twice the audible range, or at about 40-44kHz.. This leads (usually) to a kind of muddy bass and harsh highs. The PowerLight circuit samples at 230kHz providing much better bass response, and a noted smoothing of the highs. 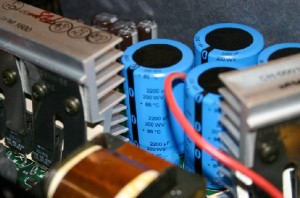 The output section uses a normally class AB linear output circuit with 8 output devices per channel. However, when needed, the power amp circuit can switch to a higher voltage rail. This allows the unit to maintain high-efficiency under most conditions, while providing all the power necessary when called for.The switching of voltage rails takes less than a millisecond, and is transparent to the user.The amplifier is nominally rated for 425 watts per channel into 8-ohms, 700 watts into 4ohms, and 1200 watts into 2-ohm stereo. 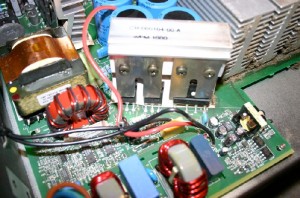 When bridged, the unit provides 1500 and 2400 watts into 8 and 4 ohms respectively. It features a variable speed fan cooling system, a soft clipping circuit, 1/4” unbalanced and TRS balanced inputs, as well as XLR balanced inputs. A low cut filter is also provided with a selectable 30 or 50 Hz cut off point. The 2402 also has the best S/N ratio of the line, with a respectable 108dB. Full bandwidth dampening factor is given as >500 into an 8-ohm load. The PLX series is meant for professional use, but it can easily find its way into a home hi-fi or HT setup, where a ludicrous amount of power is needed. A perfect candidate for a passive sub power amp, or even powering main or surround speakers. The specifications are at least as good as any receiver or power amp in its price range. 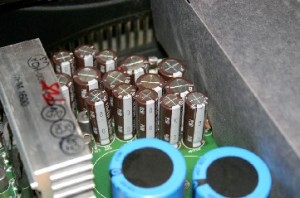 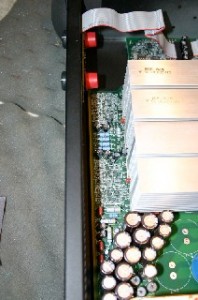