Harman Kardon was founded in the early 1950’s to produce affordable, high-quality audio equipment for the average person. Their products were very well built using the best mass production techniques at the time. Unlike other companies at the time, h/k tried to keep costs down by using as much off-the-shelf componentry as possible. They then used conservative design to build affordable and excellent sounding gear. In the later 1960’s h/k began designing their products in house and sending the order to Japan or R.O.C. to have the units built. Initially, this lead to some quality control issues as certain specifications were lost in translation, and part-substitution ran amok. Marantz routinely performed on-site audits of manufacturing facilities to prevent this sort of thing from happening. h/k followed suit and enforced very stringent terms of quality control on the manufacturing facilities.

The h/k Twin Power receivers were rather unique in that the left and right channels each had their own power transformer, rectifier circuit, and filter capacitors. This was somewhat common practice in the mid-and late 1970’s, but such a feature was only found on top-shelf integrated amps. Other companies, such as Marantz, touted “Dual Power” systems, but these were not fully twin powered like the h/k’s: these “Dual Power” designs used two secondary windings on a common transformer core, negating some of the benefits of a truly twin-power design.

The benefits of the design were numerous:

The 730 was the second place unit in the second series of Twin Powered x30 receiver with the TOTL unit being the Citation Receiver (not really a x30 receiver, but was still Twin Power). The 40WPC 730 replaced the 45WPC 930 in 1976. Nobody really missed the extra 5 watts, as dynamic power and s/n ratio increased dramatically. The Harman/Kardon 730 was also more reliable, using a simpler design and more modern components. 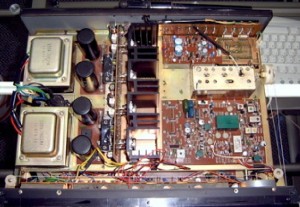 The power amplifier is a direct coupled (DC) complementary design (h/k’s first). It is a very low NFB design, which does not have as much ultimate gain, but it ensures greater power reserves and lower noise. The amplifiers are nominally rated at 40WPC, but using modern measurement methods, I found it was capable of 90 watt dynamic peaks (+3.25 dB), and the amplifier output is fairly stable to 2-ohms. Being a DC amplifier, however, it is more sensitive to varying loads than something like the CC Marantz 2230 or h/k 820. h/k’s claim for the frequency response (4Hz – 130kHz) seems to hold true with test loads. THD is less than 0.1% and is primarily second order. This is quite good for a 1970’s amp indeed.

The pre-amp continues the very-low NFB philosophy and is a simple and elegant design. Overall, the pre-amp section is not as good as the Marantz, but it correctly relies on the power amp to carry it. Tone controls are centered at 50Hz and 10kHz, and provide +/- 12 dB gain or attenuation. The contour (loudness) control provides an additional 10dB of gain at 50Hz. A low cut filter provides -6 dB/oct attenuation of signals below 50 Hz, and a high-cut filter provides -10 dB/oct attenuation above 10kHz. You can see from these specs where h/k cut corners in the pre-amp design, reusing the same two filters for all tone-related controls. The 730 provides 4 high-level inputs (Tape 1, Tape 2, Aux 1, Aux 2), and two lowlevel RIAA equalized phono inputs. The tuner is a 4-gang hybrid design with FET front-end and crystal filtering. Tuning accuracy is spot-on and is able to pull in even remote stations clearly. The tuning indicator monitors signal noise instead of strength, which is unusual. AM performance is astounding when compared with modern receivers.

H/K receivers, especially the twin-power x30 series, are my favorite to listen to. They have a simple and understated sound that results in little or no listening fatigue even after several hours of moderately loud listening. The 730 is exceptional in all these regards. Background noise is almost non-existent allowing for a perfect canvas onto which to “paint” music. Bass tones are always satisfying, and midrange and treble are very clear. Clipping is graceful, resulting in slightly compressed sound, but no apparent DC nasties. The 730 also demonstrates extraordinary tonal balance. The bass and treble controls are virtually unneeded the sound from the amplifiers is naturally so full and well balanced. 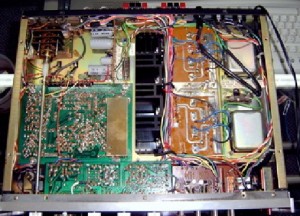 All of this results in one of the most enjoyable and musical receivers ever made. Truly a classic.