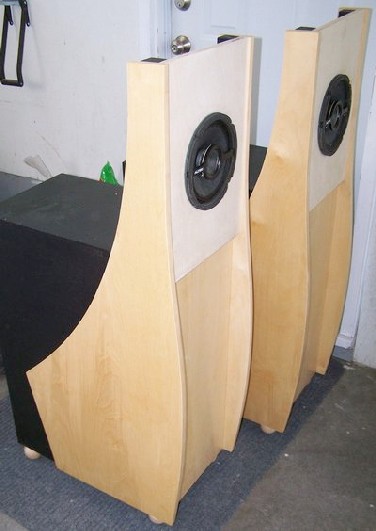 Well as promised (finally), I’m nearing completion of the the “Spirit of Orion” loudspeaker project . For those that don’t know, the Orions are Siegfried Linkwitz’s DIY “challenge” to the world of loudspeakers. Dr Linkwitz (of Linkwitz-Riley crossover fame and the designer of some seriously expensive , but reportedly excellent Audio Artistry “Beethoven” loudspeakers). When not having audio “fun”, he spent his career at HP. See his biography at Linkwitz Labs.

The Orions have what I think is a very attractive look to them. They also are reportedly excellent, but a little on the pricey side (turnkey starting from $8200 including all electronics, and amplification). I don’t think pricey for what you get: A world class speaker that is relatively affordable, designed and built by one of the audio greats alive today. But building a pair is well beyond my means at this time, and beyond the means of many who read us here at A$$A. So what is a poor man to do? Well, how about building a pair of loudspeakers that look similar, and use some similar concepts … but do it on a budget of just 12.5% of the originals? That was the task. These are not clones at all, and represent a completely different methodology, topology (mostly), and outcome. Remember Linkwitz’s contribution to audio is quite profound, and I do not propose that I am in any way, shape or form the equal of Dr. Linkwitz. Please note that this is not a treatise on Linkwitz’s work (I am simply not qualified to do such) but rather a different interpretation of some of his ideas.

The basic design thought process was to build a much less expensive speaker that may give one a significant taste of the high end, without committing several thousands of dollars. If you choose to take up this build, know that if you make any changes to the design, I cannot (nor will not ) entertain critiques of other implementations, though. This is just “put out there” as an idea and an experiment. But boy, what an experiment. I like full range drivers and open baffles. I dislike complicated crossovers and electronics. At some point , some may call me a purist. But really I appreciate the time and effort that qualified audio folks put into designing crossovers and I simply don’t have the patience. And the art of crossover design truly is an art, and can take several iterations to “perfect”. So I’m really a hack, and can’t really build anything. But my daughter’s boyfriend, Mike (my new audio “partner”), can. It was decided to try our hand at a truly full range sub/OB type loudspeaker.

Quite a few years ago, a fellow named Moray Campbell demonstrated the spatial cues that are provided by stereo sub-woofers to me. The effect was not subtle. This idea had always stuck with me. Anyone that knows Moray know that he can sometimes be as subtle as a brick through a plate glass window. But, and here’s the BUT, he really knows his schtick, and he’s a great guy to boot. Despite the description above, he really is very subtle and non-offending to pretty much everyone I know who has met him. Moray is one of the few folks that I know who had made a living designing audio and has a great set of ears.

So the basics for this project are an open baffle for the “audio” range, and the bass to be handled by a subwoofer per channel, all to be housed in an “Orion-esque” enclosure, because I think Mrs. Linkwitz has a great eye aesthetically speaking. Now the search began for some suitable electronics and subs to make this work.

Searching on the Internet for sub-woofers and amplifiers can be very time consuming. There are a great many folks hawking their wares out there, and some of these wares are very good at very reasonable prices. I recalled that some time in the past I had visited www.apexjr.com.

A surprising amount of “stuff “was there, and much of the speaker “stuff” was actually quite good. On the page I found M&K plate amps putting out 250 watts RMS into 8 Ohms, and the matching 12” driver for $200 the pair. Times that by two and what do you get? 2 X 250 watt amps with low level crossovers and phase compensation and 2 robustly built sub-woofers from M&K’s 1250 THX powered sub. That is the basis of the electronics and the woofer package. 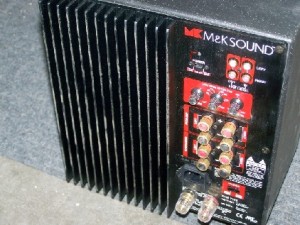 Have I ever mentioned I like aperiodic speakers? Basically they are a “leaky” closed box, but with a really great side effect. If you design a sealed box and add a resistive port, as Bill Perkins in Calgary had done in the past, the impedance at resonance is reduced usually by 50% or so, allowing the amp to put more power to the driver and controlling it better. Aperiodic it is. Oh, ya, and if it was good enough for Dynaco to do with their famous line of speakers, it’ll be good enough for me. I asked a few Internet audio “buddies” to double check my math, and the result were returned in favour of my approach.

On his website, Linkwitz eschews the virtues of “omni-directional bass”, particularly regarding the Pluto subwoofer, and his stated claims on how good it can be, and the benefits of down-firing drivers to this end. So it was decided a down firing , aperiodic, powered sub-woofer would handle the bass requirements. Based on the literature still available on the Internet, The 1250 THX sub should be suitable for low 20 Hz ranges in the bass and up to 300Hz, depending on the associated “satellite” loudspeakers. Also realize that the need for brute  force amplification has been removed from the main amplifier requirements. The “sub” enclosures are 3.24 ft with 2 4” “vents” that can be tuned with stuffing. (more about that later).

The boxes were built using Baltic Birch plywood, and internally braced (although not “over braced”). Interior panels are dampened with wool felt carpet underlay and finished in a natural stain with a few coats of clear polyurethane. The remainder is painted utilitarian black. The side panels are very similar in shape to the Orions, and are naturally finished and cleared Baltic Birch as well. They support an open baffle between them. The sides are secured to the sub box (unlike the Orions). The open baffles will be treated to a nice rare and exceptional find…a nice piece of Purpleheart for the OB baffles once the driver is settled on. 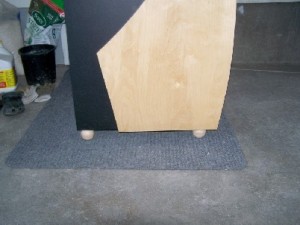 For the open baffle drivers, several have been considered. As of this writing none have been decided on, but a contender is the Vifa coax that is also currently available from Apex Jr, for $30 the pair. The recommended crossover is similarly priced at about $30 a pair (using good Solen air coreinductors, Fastcaps and resistors). Once determined, the driver will be “announced as the proven performer. I also have a few full range drivers that may make a trial appearance.

As of this writing (some 2 months later than the above paragraphs and outline), there have been some changes. There was no apparent benefit to aperiodic enclosures in this case, and in some ways upon listening, there were some negatives. The sub-woofers are now sealed. The tope end “open baffle” drivers have been settled upon. The choice? Not a likely one, but power is not a huge issue as we are currently driving them with a 52 watt per channel tube amplifier–the Jordan JX92S. Reasonably efficient (88 dB), and very wide bandwidth (50 Hz-20 kHz) with a fairly benign impedance (5.4Ω if I remember correctly as measured by none other than planet10 himself). Once completed, we also looked at the use of the purpleheart, and decided that it looked wrong. So no purpleheart (a trim ring was tried as well and it looked really quite odd). We are still trying to dial in a high pass crossover to limit the excursion of the little Jordans (a rather health 9 mm peak to peak), but limiting the excursion can help out the midrange. So far nothing we have tried is transparent enough to go unnoticed. So for now the subs are crossed over at 250 Hz , and the Jordans are run fullrange. There is some magic in them thar drivers. We still need to listen to the Jordans with some good solid state power feeding them too—something that is well documented on the Internet.

Next time, in Part II: some construction photos, drawings, setup and listening notes. Also a comparison to some well reviewed, current model loudspeakers.