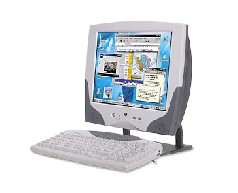 Some months back Sooloos brought to the market a stunning evolution in music servers. Combining a 17” touch panel screen (Control), rectangular computer module (Source), hard drive modules (Store), and an advanced software package. It has taken the music server system to a new level of sophistication along with a stratospheric price tag of $12,900. For those wishing to stay in the four figures, there is the Qsonic Q110, starting at a measly $5995 for a 250 gigabyte version.

When my friend Jeff Dorgay of TONEAudio first reviewed Sooloos, I began thinking that I could create a poor man’s version of the system for under $600. My goal was to give us thin-walleted souls access to most of the features that both of these fine units offer. In my own case, I had a few parts to begin with. To start with I needed a computer. Now, many people use old laptops for music servers, and if you do great, you’re on your way. In my case, I happened to have in storage an old Gateway Profile 3 that needed a power supply. Once the adaptor was purchased from eBay, I had the basic setup ready of a Pentium III 900Mhz, 256 megs ram, 20 gig hard drive, and a cd-rw burner.

For those of you starting from scratch, the Gateway Profile 3 setup can be had for under $200 on eBay. The Profile 3 is essentially a laptop turned vertical. The only item missing is a track pad. This computer comes with a variety of CPU’s, from 800 to 1.2 MHz. Once powered up, I removed every extra program to free up as much space as possible.

Within every computer sold is an audio out plug. Unfortunately, the built-in sound feature for audio reproduction is mediocre at best. To create a quality musical experience I looked around at the various USB-based DAC units available within the $400 remaining in my budget. I also wanted a unit that would take up as little space as possible.

After looking at several possibilities I chose the Fubar USB DAC. This unit doesn’t require any additional software. The unit is about the size of two cigarette packages. The front consists of the logo along with blue, red, and green lights. When music is processed thru the DAC both the blue and green lights are on. The backside has the receptacle for the power adaptor (a nice, small, slim line unit), power toggle switch, USB input, and RCA analogue outputs. The exterior casing is made of a substantial steel gauge. 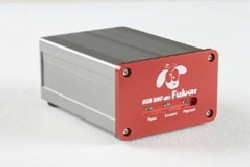 Getting music to come thru the USB line involved the simple task of restarting the computer, after about 90 seconds of Windows XP sp2 recognizing the unit. Immediately, I heard the startup chord of Windows thru my HK receiver and connected speakers, the Swan 2.1 SE stand mounted monitors. I can honestly say that was the easiest product plug-in to Windows next to a memory stick. 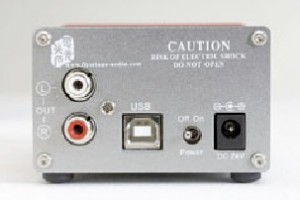 The sonic difference was ridiculously obvious, harshness and sonic dropouts disappeared entirely. My son, who has a slight hearing loss spotted the difference without any prompting. The Fubar enclosure contains a digital to audio converter and a nice set of RCA female plugs. At just $120, the processing capability of the Fubar is outstanding. In the weeks I’ve had the Fubar in the system, I have yet to hear a dropout. It even appeared to cleanup some of the distortions that I catch when listening to Billy Joel’s 52nd Street on my iPod using Apple’s Lossless encoder.

A major limitation of the Profile 3 is the size of the hard drive. In the case of my unit, it is a rather puny 30 gigabytes. In a normal computer box, replacing the drive is rather easy. However, since this design is a glorified laptop cooling is a serious issue. Since large drives run at 7200 rpm versus the 5400 that comes stock, I was advised to go with an external unit. A small, 2.5 external drive that get power in may cases from the USB port sells for around $100 for 120 gigs. Watching the sales flyers, one should be able to land a 20% savings.

DIYer’s can build their own external quite easily, but most likely using a bigger 3.5 drive and case. These can be had at virtually any computer store. Not need to worry about setting the jumpers on the Maxtor model I chose. Then, plugging in the ribbon cable and power wire clip, screwing down the hard drive to the interior of the case and closing up the box. In my case, I picked up a 3.5 500 gig drive for $140. Luckily, I had access to a 3.5 case along with a Firewire PCMCIA card. This allowed for quick loading of cd’s. The 500 gig drive was a nod to the future as my entire collection of cd’s fits onto 45 gig’s of my iPod. 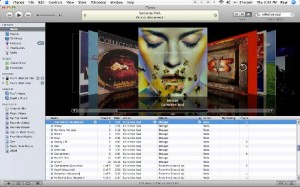 There are plenty of choices available free online to choose from, including the powerful Foo-Bar, or for those of you with an account, Rhapsody. I felt in order to get as close to the visual and feature experience of Sooloos and Qsonic, I chose iTunes with it album graphics and my personal experience with its features.1 With just two exceptions, I was able to get the album artwork downloaded thru the CDDB reference that Apple has licensed. I just wish that the image was larger and that at some point liner notes can be included in the visual presentation. With my iPod, I created only one specialized playlist, Christmas music. But for this review I setup five such groupings: Instrumental, Balladeers, Upbeat, Dramatic, and Mellow. Navigation is quite easy, although I did have to use a mouse instead the touch screen capability of the Sooloos and Qsonic. 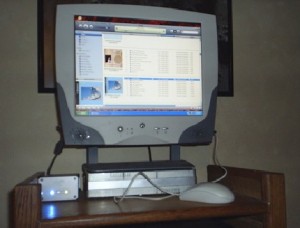 Whatever software one chooses, it would be wise to load just a few cd’s of music and try out the various features one plans on using if a lossless codec is involved. Otherwise, plan on having to reinstall the entire collection. Another factor to consider is a constant Internet connection. This allows for instant access to iTunes, Rhapsody, or Zune network, a requirement one wishes to have to download album information, or in the case of Rhapsody, music itself.

If one wishes to increase the budget, say to $1000-$1500 I would start with a blue-tooth wireless mouse, just to rid the area of the mouse wire. Secondly, for those of you with a substantial music collection a 750 gig -1 terabyte external drive. Third, a higher end DAC unit. Just as was finishing the write up of this project I received in for review the Promitheus DAC with a USB to digital RCA adaptor.

Although I didn’t have time to do any serious comparable listening, the Promitheus would be a definite possibility. Fourth for just $30, one could add either a PCMCIA USB 2.0 card, or a wireless 802.11g card. Finally, more memory is always helpful. Windows XP needs at least 256 megs to run with any ability.

Let’s review the cost of assembling this Gateway Profile 3 music server from scratch. Approximately $200 for the computer, $120 nets the Foobar DAC, $150 buys a DIY 500 gig hard drive and case. Finally, $30 gains a PCMCIA USB 2.0 card. The total, an even $500.2 What’s different: a 15” screen instead of 17”, a mouse instead of a touch screen, less visually dynamic software, and in all probability, louder fan noise. But for 1/26th the price of the amazing Sooloos, one can have a viable substitute.

How does it sound? I’ve have the PMMS (Poor Man’s Music Server) hooked up to my family room rig for a good month now. With the FooBar DAC, the sound is indistinguishable to the Onix CD-88. The only obvious difference is the fan noise. That is one thing that I wish I could solve, but I have yet to find any information online about replacement silent fans for the Profile 3. But the advantage of having my entire collection immediately accessible is worth the hiss of the fan. 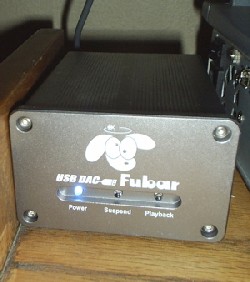 Tags: computer, Do It Yourself, Fubar, PC, USB DAC