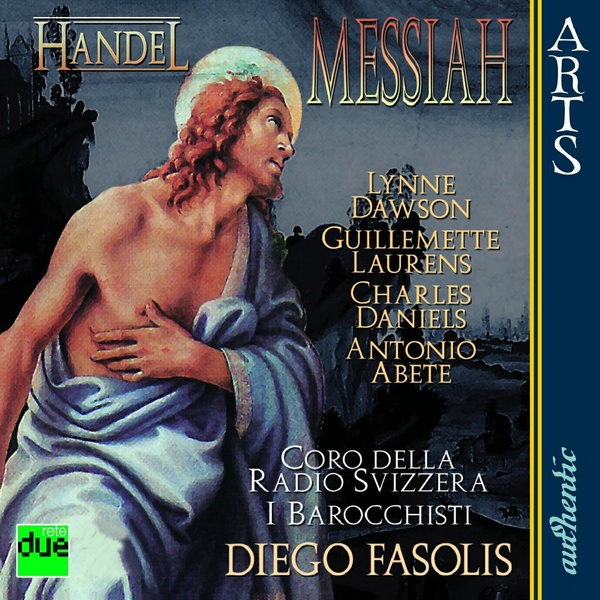 A new Handel’s Messiah release may not at first seem to be the most ground breaking of developments, especially there are numerous versions of this celebrated oratorio in existence, albeit many of them only “highlights”. However, this latest one from Arts Music seems to raise the bar considerably in technical terms over all others. For the first time ever, here we have the whole 2Ѕ hour marathon recorded from scratch onto one DVD-Audio disc in 96kHz, 24-bit PCM with no compression or equalisation used at any stage during production. Not only that, but with no less than twenty-four channels at the original recording, the engineers have captured the sound of the performers in a fresh and seamless manner.

The celebrated line-up features Coro Della Radio Svizzera (the Swiss Radio Choir – formed in 1936) and the I Barocchisti ensemble; and the icing on the cake is provided by four fine soloists all led by the baton of the award-winning maestro, Diego Fasolis (who has directed the Swiss radio Choir since 1993). The soloists include: soprano Lynne Dawson; ‘mezzo-soprano’ Guillemette Laurens; tenor Charles Daniels; and bass Antonio Abete. It should be noted that Daniels and Dawson both appear by courtesy of Universal Classics’ renowned ‘Archiv Production’ subsidiary, and an affiliate of Deutsche Grammophon.

The ensemble itself comprises up to twenty-six accomplished Swiss and Italian musicians playing authentic period instruments who between them have participated in groups such as The English Concert, Giardino Armonico, Accademia Bizantina, Europa Galante, Sonatori de la Gioiosa Marca, as well as the Amsterdam Baroque Orchestra. Moreover, since 2000, I Barocchisti has been the resident ensemble for baroque music at the Lugano Festival.

The Package: The disc, the first of an upcoming series of DVD-Audio titles from Arts Music, is squarely aimed at the multi-channel audiophile market. However, if you want a stereo version, you’ll have to settle for the recently released CD. If not, then the 5.1 DVD-A will downmix to two-channel at 96kHz (and probably sound better than the Redbook CD). Somewhat perplexingly, the booklet supplied does mention a linear-PCM 96kHz 24-bit stereo track on the DVD-A. However, according to an Arts Music spokesperson, this discrepancy only affects the first batch of booklets printed, while subsequent ones have been corrected. Apparently this arose because the product was originally to have been a two-set DVD package (and the track listing for the review sample reflects this). However, during authoring development, it was decided to hold the entire 140-minute extravaganza on one dual-layered DVD-9 without a separate stereo mix, which would not have fitted alongside the 5.1 mix. This makes Arts’ DVD-A version of ‘Messiah’ one of the longest-running high-resolution multi-channel DVD-As available, aside from Teldec/Harnoncourt’s even longer ‘St Matthaus Passion’ at an incredible 160 minutes.

The sound: DVD-Audiophiles will not be disappointed. Indeed, this is probably one of the best examples of how multi-channel sound can open-up a complex acoustic soundstage and present it in a way which is dynamic, clear, uncongested, and lifelike. As far as multi-channel mixes go, this one is neither “aggressive” nor “ambient” in its use of the five main speakers. Rather, it uses them together to produce a seamless circular image. For example, the ensemble and chorus elements form an unbroken semi-circle all the way from the back, passing through the side and to the front of the soundstage. The centre channel, however, is allocated largely for the soloists, although their voices also blend out into the left and right front channels to present a realistic field (rather than blasting at the listener from only the middle speaker, as is the case with so many existing 5.1 soundtracks). In short, in this production, one cannot pinpoint any particular speaker for one discrete element of the performance, and no speaker ‘jumps out’ of the mix or tries to dominate the overall picture.

Gian Andrea Lododvici, the production and recording director, and a well known producer for numerous other labels, talked to High Fidelity Review about the main goals: “For this recording we wanted the listener to experience the performance as the conductor did, in the church with the performers all around him. In this case, the challenge we faced with presenting Messiah in a 5.1 format was to find the best way to differentiate the spatial depth between the soloists, chorus and the orchestra. This was especially the case as in the actual venue, some of the performers may have only been sat a few feet from him.”

Originally recorded live in 2000 during two separate concerts, this Messiah used state-of-the-art Prism Sound, Apogee, and Lake People multi-bit ADCs feeding to several Tascam DA multi-track digital recorders. Indeed, it was arguably the first ever twenty-four-track production of any works recorded, mixed and mastered entirely using 96kHz and in 24bit. “For the chorus we used six channels, four for the soloists, and the other fourteen for the overall ‘image’,” explains Lodovici. “By having plenty of Neumann and Schoeps microphones and Millenia Media preamps on hand there were many solutions available to us to create the right image for the final edit. Furthermore, in this recording there was no need to use additional microphone feeds for ambience (which we did have just in case), since the church interior itself provided sufficient natural reverberation. In fact, we only applied a very small amount of reverb on the ‘spot miked’ soloist voices using a dedicated 96kHz 24-bit Lexicon 960L digital unit, and in doing so we kept everything in the pure high-resolution LPCM domain. The recording monitor employed was a Hafler TRM-8 via a Yamaha 02-R digital recording console, with editing taking place on a SADiE Artemis 32. Not surprisingly there is a wide dynamic range in this recording of at least seventy decibels (dBs). And I mean seventy real dBs. Indeed, from a technical point of view, I confidently believe that this is the best ever recorded ‘Messiah’. Period.”

The music: On the face of it, this is yet another new version of the famous ‘Messiah’ to add to many which are already in print. So how does this stack up musically? When asking such a question, attention naturally focuses initially on the main vocal soloists. On this note, it could be argued that even if Charles Daniels – the lead tenor – is less at ease than on Paul McCreesh’s recording (Archiv Produktion), since a slightly intrusive vibrato masks some instabilities, his performance is still highly convincing. But it should be remembered that this was a physically demanding non-stop live recording. And while there may be some dryness in Guillemette Laurens’ mezzo-soprano (alto) voice, her interpretation is certainly dramatic nonetheless. Meanwhile, bass singer Antonio Abete delivers a dynamic, almost operatic performance which, once you have become used to his strong Italian accent, proves to be a highly accomplished interpretation which does complete justice to Handel’s original score as well as positively complementing the backing chorus and ensemble. However, arguably the most memorable moments of this performance are brought to us by soprano Lynne Dawson who delivers fine, sensitive and expressive singing in each one of her numerous arias. The choir and the orchestra do not disappoint either, with both fully living up to their international acclaim. The choral movements are indeed every bit as good as one would expect, with a lush and rich texture, and a beautifully resonating overall sound. The choral movements at the beginning of Part Two in particular, are fine examples that are full of energy and vigour, powerful, yet with a hint of delicacy in their dynamics.

Donning his artistic director’s “cap”, producer Lododvici explains how the ‘Hallelujah Chorus’ has been given a different treatment compared to most other renditions of this most recognisable ‘Messiah’ track. “For me, one of the most exciting things about this performance is the way the Hallelujah starts off very quiet and then becomes much louder. With most other interpretations it starts off very loud. However, in the original manuscript we discovered that Handel did not write ‘forte’ in the beginning. Indeed, there is no indication of dynamics at all. I therefore took the approach that it could be like in the 18th century, when the absence of the ‘forte’ mark means it should be played as ‘piano’. However, when you do see a ‘forte’, then it really does mean loud. And this dynamic contrast works exceedingly well on DVD-Audio.”

Lodovici has been a recording producer since 1985, and works for numerous record companies from the biggest to the smallest. These include Decca, Universal, Chandos, Naxos, and Denon, to name a few.