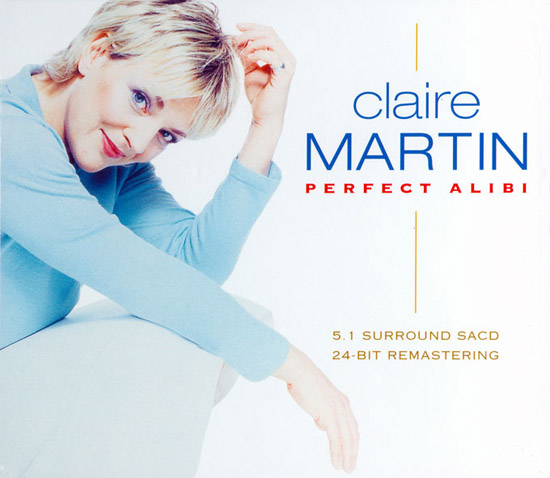 Claire Martin has made quite impact on the jazz scene since signing with Linn Records back in 1992. Her success has included three British Jazz Awards; Rising Star (1994), Best Jazz Singer (1995) and Best Vocalist (1997) and led her to perform throughout the world with many highly acclaimed orchestras, the BBC Big Band and the RIAS Big Band amongst them. Many UK radio listeners will also be familiar with her BBC Radio 3 show, ‘Jazz Line-up’.

Martin’s style is not the easiest to describe, probably because it doesn’t fit into any particular category. She was born in South London but has travelled the world whilst working on cruise liners, so her musical influences also encompass artists from the diverse New York jazz scene. Martin lists Ella Fitzgerald, Shirley Horn, Sheila Jordan and Peggy Lee amongst those who have shaped her musical flair.

The qualities of Martin’s voice are easier to describe; her diction has a hissing, breathy character. Those searching for a one-word summary will find the adjective ‘husky’ fits admirably.

‘Perfect Alibi’ is Claire’s latest release (not counting a ‘best of’ compilation) and her seventh on the Linn Records label. Recorded in late 1999 and early 2000, the disc is now available as a two-channel Super Audio CD hybrid (SACD on one layer and Red-book CD-DA on the other). Yes, this is undoubtedly a jazz album, but it’s not a difficult piece by any stretch of the imagination, far from it, and once again Martin demonstrates a remarkable versatility and vocal talent. ‘Perfect Alibi’ contains tuneful melodies and memorable lyrics together with some outstanding performances from the musicians brought together for this recording.

They include Paul Stacey, who also arranged a number of tracks, produced and engineered the album. He is deserving of special mention as, perhaps not unsurprisingly, his prominent musical input on guitars and keyboards often steals the show. Stacey may be best known for his work with The Lemon Trees, singing backing vocals and playing guitar and bass, but he’s also written film and musical scores such as ‘Dakota Road’ and ‘Masculine/Mescaline’. His portfolio as a session musician reads like a veritable who’s who of contemporary artists; Madonna, Tori Amos, Roachford, Matt Bianco, Shirley Bassey and the list goes on… From that small selection you’ll probably be able to tell that Stacey’s musical style is also somewhat eclectic, the ‘perfect’ match for Claire Martin’s own diverse range.

It’s fairly obvious from the outset that ‘Perfect Alibi’ has been recorded in such a way as to make the most prominent use of Martin’s sultry vocal talents. Only during ‘More Than You’ll Ever Know’, the album’s longest track at almost eight minutes, is she allowed to step back from the microphone, really open up and thereby demonstrate her full vocal range. Never is her voice huskier than upon ‘Man in the Station’, a duet with guest performer John Martyn, but this actually counts against the piece. Martyn himself has an unbelievably mumbled, indistinct vocal style akin to Joe Cocker with a mouthful of marbles, so the duet never really gels in a meaningful way.

‘Man in the Station’ is, thankfully, the only real artistic low point of the entire album and there are a number of clear, standout songs to choose from when trying to pick a highlight.

One candidate has to be ‘Up From the Skies’, a Jimi Hendrix cover. Here Martin’s delivery takes on a sassy, streetwise tone and the track is also blessed with an excellent combined guitar/vocal passage. ‘Over by Allenby’ would be another, a bright and breezy song with jaunty horn and whistled accompaniment. The clear winner however, has to be ‘People Make the World Go ‘Round’, an atmospheric piece of ‘city’ music which makes one reminisce about sultry nights and the sound of distant traffic. Martin is at her sensual best and is placed forward in the mix above pulsing bass and tenor sax.

In fidelity terms, ‘Perfect Alibi’ isn’t the last word in transparency, but faults are few and far between. There are times when the disc lacks ‘punch’ and an injection of low frequencies wouldn’t hurt, but conversely the guitars on tracks such as ‘Man in the Station’ are clearly defined and enjoy an airy quality – most notably the solo of ‘More Than You’ll Ever Know’ – and the bass line of ‘People Make the World Go ‘Round’ should make anyone sit up and take note.

‘How Can I Be Sure?’, the disc’s opening track, is by far the worst, it’s a muddled conglomerate of strings and horns, but it’s the percussion’s brittle qualities that really are its downfall. The lesson here is not to judge the disc after just a cursory listen because things definitely get better. The only technical fault, if you can call it that, is a deep, almost sub-bass ‘thump’ that punctuates the closing track ‘Wailing Wall’, which features solo voice and organ/synthesiser accompaniment. It sounds like someone was stomping their foot or banging a microphone stand during the piece, but you’ll only find the thumps annoying if your system has admirable low frequency (20Hz and below) capabilities.

Comparing the SACD and CD-DA layers does not reveal night and day differences, which is not unsurprising since the recording’s fidelity is not the most inspiring, but it’s an interesting exercise nonetheless. Immediately apparent is that the Super Audio CD version is more open, airy and instruments have a greater sense of individuality and attack, but the most compelling evidence in SACD’s favour can be found by concentrating upon Martin’s voice. The CD-DA layer just isn’t able to convey her breathy delivery with the same sense of presence; the sexy whispering quality is there, but yet somehow detached.

While ‘Perfect Alibi’ is not an earth-shattering example of SACD’s potential, it does offer distinct advantages over the CD-DA version so wins on that score. More importantly, the material and artists themselves, most notably Claire Martin (of course) and Paul Stacey turn in excellent performances, both of which make this disc worthy of your collection.