Minneapolis—Was CEDIA an opportunity lost for promoters of DVD-Audio and SACD? Last week, while waiting at the airport for my flight out to the Expo 2002 trade show for the Custom Electronic Design and Installation Association (CEDIA), I came across the owner of a local high-end Audio/Video sales and installation store. When I mentioned I was covering this industry insider event for new products and technologies, including high-resolution multi-channel formats, he asked “Oh, like DVD-Audio? We don’t get much interest in it from our customers.”

“Do you ever demo it for them?” I asked.

I dutifully pointed out the extensive market research showing that average consumers respond favorably to multi-channel music when given the opportunity to hear it, but I found it troubling that I had to be explaining this so far into the rollout of the SACD and DVD-Audio formats. How hard could it be, in the course of a demo to a prospective buyer for a home theater system, to pop in a multi-channel recording of Fleetwood Mac’s ‘Rumors’ or Gaudeamus’ ‘Sacred Feast’ (or any of a growing number of stunning multi-channel music discs), to show that the same system they’re contemplating will also give them a significantly improved musical experience? Even when the margins on the individual DVD-Audio and SACD players are small, a compelling multi-channel music demo could help sell the whole speaker and electronics package.

That exchange drove home to me that regardless of the time and money the backers of these emerging formats expend on wooing the A/V press, reaching out to a specialized readership is only part of the challenge. Where high resolution multi-channel audio will gain real market traction (or not) is in the place where the majority of buyers can experience it – the dealer showroom. Yet business-oriented dealers, with their eyes on the bottom line, cannot be expected to spontaneously embrace new technology unless they can recognize its value proposition.

Which makes the lack of formal participation by either format’s backers at this year’s CEDIA Expo all the more surprising and disappointing. The demonstrations, discussion, and collateral promotions that have become routine at CES and other A/V shows were nowhere to be seen at the Minneapolis Convention Center. Of course, trade show participation is a long-lead item, and perhaps the sprawling consortium of DVD-Audio backers had no time to include CEDIA in its recent re-launch strategy.

But even SACD’s chief proponent, Sony Corporation, seemed to have forgotten about the format it developed and usually promotes with such efficiency. Despite prior assurances from Sony’s publicist, SACD was missing in action, both from the company’s prominent press conference and its exhibit hall booth. Despite Sony’s often-asserted desire to include SACD in its mass-market products, SACD decoding was omitted from the company’s new $500 301-disc DVP-CX875P DVD changer, (it will be added in next year’s replacement model). At the Sony booth, when I groveled for scraps about any new SACD developments, one of the reps went rummaging in a back room, eventually returning with the latest catalog of software titles. Not exactly stop-the presses ammo.

That isn’t to say there wasn’t SACD and DVD-Audio news to be found at CEDIA. On the contrary, the HFR reports to follow will cover some exciting new developments in digital links and universal format players. And of course, the ranks of players that handle one format or the other continue to swell.

With the CEDIA Expo fast overtaking CES as the premier annual showcase for home audio/video, its restricted and focused dealer/installer attendee population affords format promoters an ideal venue to win the hearts and minds of their greatest potential evangelists. The clock is ticking, and the lack of promotional presence at this year’s CEDIA was a major missed opportunity. No SACD capability in this new mass market DVP-CX875P DVD er from Sony 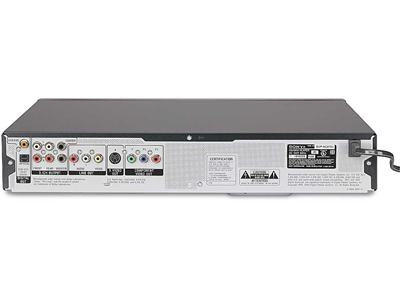