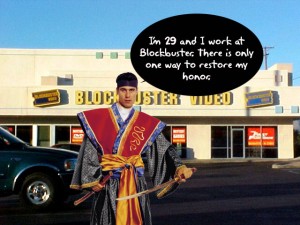 We all know that Blockbuster is in the ever-lovin’ TANK.

A billion dollar debt load, a fourth quarter loss just posted that’s roughly half their debt load, competition on all sides, and a declining business model are all adding up to trouble, but say what you will–you can never say that Blockbuster’s just waiting to die.

They’ve hired a financial analyst to try and restructure that billion bucks in debt, and they’re in talks with Movie Gallery to get their hands on “unnamed assets”.

What assets might those be?  Stores?  Possibly–some Movie Gallery and Hollywood Video stores might well have been the only video stores in town, and by all reports, those video stores are doing passably well.  Movie Gallery could certainly use the cash, what with the second bankruptcy in as many years in progress.  Movies, perhaps?  This would make more sense as Blockbuster could certainly use all the product it could get its hands on since it’s looking to open up a two-front war, in the streets with Redbox and in the mail with Netflix.

What’s Blockbuster’s next move?  Well, I don’t know, folks–but for all the latest news on the format wars as they unfold, you know right where to go.  Here.