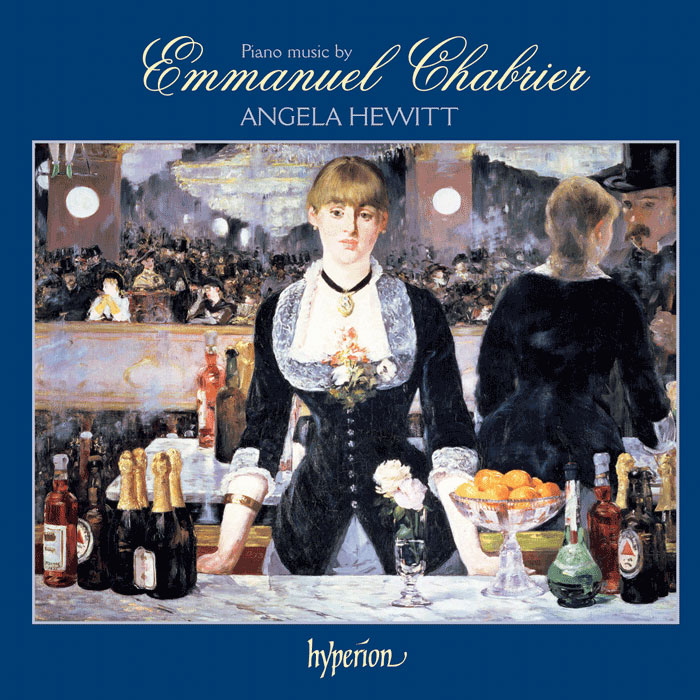 One of the great delights of exploring classical music is to discover something previously unknown to you, something which immediately makes you wonder, “How did I live without this before?” With a quarter-century of listening experience under my belt, I’ve been around long enough to have grown tired of Beethoven and Mahler and then become excited by them all over again at least twice as I delve deeper into their works. But the freshness of unexpected discovery is the sweetest of all, and this new Hyperion disc from Angela Hewitt has opened up the doors to a whole new world for me. Hewitt is of course famous for her pianistic sallies into baroque music, salvaging what once had been a repertory regularly performed on the modern grand piano. But here she explores the small but utterly fascinating body of piano music written by French composer Emmanuel Chabrier, who predated Debussy and could rightly be considered the true French Impressionist composer.

Chabrier, famed (or should one say, “infamed”?) for his boisterous orchestral chestnut ‘Espana’, turns out upon closer look to have been a much more interesting character than that piece alone would suggest. Perhaps the first clue would be the story about the wreckage Chabrier would leave behind him whenever he performed his piano pieces himself. Another clue can be found in the piece of information cited in Jean-Paul Sevilla’s excellent booklet essay accompanying this release (artfully translated by Roland Smithers): It could take as little as one chord of Wagner’s harmonies to draw tears from Chabrier. Though he cultivated gaiety and boisterous humor, a darker streak clearly ran through the man, and it surfaces again and again throughout these alternately elegant and disturbing pieces.

The disc opens with a scintillating flourish in the piece entitled “Impromptu.” The surge of moods shows a debt to Chopin, and the Spanish touches show a typical Gallic nod toward their southern neighbor (a feature which shows up again and again in Chabrier’s music). But immediately Chabrier’s distinctive fingerprint is there: Rolled, arpeggiated chords which any other composer of the late nineteenth century would render with the pedal down, are played sans pedal in Chabrier, sometimes even staccato, giving us bald color instead of blended sounds. In many ways, Chabrier’s approach points more toward the innovations of the twentieth century than back at the past. Hewitt’s expertise in sorting the textures of baroque music and avoiding the potential blurring effects to be had from using too much sustaining pedal obviously stand her in an ideal position to perform this music. Add to this coloristic sense an ear for harmonic ambiguity and Hewitt and Chabrier prove to be a match made in heaven. This forward-looking piece was first published in 1873, and it encapsulates the many extremes to follow on this disc. The “Ronde champкtre” which follows predates the “Impromptu.” Its main theme comes from an earlier operetta aria, but it hardly yields to anything else in Chabrier’s catalogue for quirkiness and unpredictable change.

The main thing on this hybrid Super Audio Compact Disc is the ‘Dix pièces pittoresques’, which is a set of vivid pianistic pictures from 1881. At their premiere, César Franck said, “We have just heard something extraordinary. This music links our time with that of Couperin and Rameau.” Indeed, French music had seen nothing this quirky since the heyday of those baroque masters who incorporated so many revolutionary touches in their keyboard compositions, originally destined for harpsichord. Instead of trying to tame down Chabrier’s alternately bristling and open-hearted gestures, Hewitt plays them for all they’re worth, which is quite a lot. The opening piece, “Paysage,” is evocative in the general sense of a country image implied by the title, but it is also full of curious asides, odd details that briefly emerge from the shimmer. The second piece is a gentle and withdrawn sigh entitled “Mélancolie,” though it smiles as much as it sheds tears. For extrovert brilliance, the set shoots sparks in its third number, “Tourbillon,” which is a ceaseless hail of high-spirited notes. Without transition, the mood flips to the elusive dappling of “Sous-bois,” where Chabrier seems to invent musical Impressionism, before Debussy was even out of school. After an interesting though not particularly Moorish “Mauresque” (the titles are thought to have come from Chabrier’s publisher, not from the composer himself), we get to the gem of the set, generically saddled with the unhelpful title “Idylle.” It starts out innocently enough, dainty and coquettish, albeit with a glint of mischief; but the contrasting strain that soon steals in is shadowy and uneasy, and the delicate contrast between the two captures a certain, elusive sort of mood so precisely that one could spend a year trying to express it in words and still never get near it. The middle section of this movement further peeks into harmonic closets other composers were still scared of opening in 1881. As Francis Poulenc later noted, this “Idylle” opened up “a new harmonic world” for him. Hewitt’s skill at poising the delicately stippled staccato accompaniment against the legato theme is something to behold. The following “Danse villageoise” is as bold and alert as a sunny but crisp autumn day, demonstrating the force with which Hewitt can play when required. The next piece, “Improvisation,” is marked “fantasque at trés passioné.” As Sevilla points out, this work is Chabrier’s closest flirtation with the more central Germanic tradition: In both lyricism and rippling unease, it is the most Schumannesque piece here, building to an ecstatic peak before subsiding in oddly sagging harmonic blocks to a peaceful close. The penultimate “Menuet pompeux” is particularly ill-suited by its title (“Stately Minuet”), which does nothing to prepare the listener for the punchy rhythmic exhilaration to follow, full of unexpected accents and spicy dissonances. The middle section of the piece is admittedly more like a minuet, though again it is more lively than stately. The set’s closing number is a “Scherzo-valse” of boisterous joy and high-spirits in which Hewitt positively revels. Again, the characteristically fast, unpedalled arpeggios sound like guitar chords cutting through the dance music of a street fair. It is also worth noting that Chabrier took a handful of the numbers from the ‘Dix pièces’ (including the wonderful “Idylle”) and orchestrated them to form the ‘Suite pastorale’, which has been recorded for Deutsche Grammophon by the Vienna Philharmonic under John Eliot Gardiner.

Next on the disc is a feisty “Aubade,” most suitable as a morning song for a rather brisk dawn. Again, it draws on Spanish touches to brighten the textures, even in the lyrical contrasting section, with all its wayward changes of direction. This charming piece is followed by the slightest selections on the disc: Three posthumously published piano pieces, a burbling “Ballabile,” an oddly slow and obsessive “Caprice,” and the more substantially melancholy “Feuillet d’album.” After that is the “Habanera” from 1885, which is surely Chabrier’s most dreamy evocation of Spain, that is, if you can get out of your head the coincidental similarity between Chabrier’s melody and the opening phrases of the much later popular song “Que Sera Sera.” Last on the disc comes Chabrier’s final and most well-known keyboard piece, the “Bourrée fantasque,” a work that is certainly more “fantasque” than “bourrée.” Chabrier’s imagination gives the pianist a formidable digital workout, while flinging creative sparks left and right. Gentle passages alternate with violent outbursts, often without warning. Hewitt fearlessly jumps into the brew and shapes it enough to keep it coherent, without ever trying to smooth over Chabrier’s bristly asides.

Of great importance to the sound of this recording and its impact is Hewitt’s choice of instrument. Instead of using the average gleaming Steinway, she opts for a Fazioli piano with a slightly more textured and less muscle-bound sound. Such an instrument is closer in sound to pianos of the nineteenth century, and it proves especially felicitous for Chabrier, where the pointillistic daubs of color are far more important than an overall wash of sound. The Fazioli is also slightly drier and brighter than a Steinway, both perfect attributes for Chabrier’s style. One slight drawback is that many listeners will not have the chance to experience this instrument (and thus Chabrier) at full glory if they can only listen to the standard redbook compact disc layer of this hybrid disc. The delicacy of the Fazioli’s timbres bloom in the high-resolution layers, but that distinctive sound doesn’t quite come through the flatness of the low-resolution layer. Of course, any piano connoisseur could tell you that listening to a low-resolution digital recording of a piano is akin to drinking a fine wine with your tongue wrapped in gauze. The flavor is good, but you know it should be great, so you can always tell that something is missing. In low-resolution, this recording could almost be mistaken for a recording of a “normal” Steinway in a bright concert hall with some microphones that brightly color the sound, something like many of the old Mercury recordings from the 1950’s. But the high-resolution layers reveal the true delicacy and flavor of this piano, although the recording venue, Das Kulturzentrum Grand Hotel in Dobbiaco, Italy, strikes me as a less-than-ideal venue. Its sound is warm in the low and middle range, but either the room adds an ever-so-slight touch of tinniness to the thinner textures of the pianos high notes, or else a touch of artificial reverberation has been added. That does seem the case in the “Danse villageoise” from the ‘Dix pièces’, where Hewitt’s boldly accentuated notes come bouncing back from the rear of the room in the surround channels, a slightly distracting effect. That same aggressive bounce-back is, however, quite effective in the stranger world of the ‘Bourrée fantasque’, suiting the general phantasmagoric mood. In the quieter parts (which by far dominate this music), the surround mix is ideal, opening up the sound stage and putting you in the room with the pianist. The stereo only SACD layer is particularly welcome here because it preserves the high-resolution reproduction of the Fazioli’s starchy sound in great freshness, while removing any issues of the aggressiveness of the multichannel mixing (though losing something of the intimacy of the quieter moments). The plain CD layer, as stated above, is really inadequate technologically for full enjoyment of this program, but it has a solid, fine sound which is unlikely to greatly disappoint the casual listener.

Incidentally, the impressionist painting chosen for the cover of this Hyperion release was not selected for generic reasons. It is the famous ‘A Bar at the Folies-Bergère’ by Manet, and it was part of a formidable collection of so-called “Impressionist” art which Chabrier himself owned. Of course, musical explorations show how apt it is: Chabrier’s bursts of pure color are much closer to the Impressionist ethos than the music of Debussy, which is customarily described as a musical version of Impressionism. Instead, Debussy stands closer to the French literary Symbolist movement in his enigmatic style, perhaps aligning with the visual arts only through the American maverick James McNeill Whistler, whose paintings inspired Debussy’s ‘Nocturnes’. For truly brilliant, style-is-substance Impressionism, Chabrier is the genuine article; and I will be delighted to revisit this disc frequently in the future.