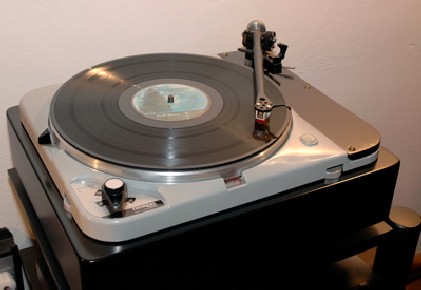 As I write this, I have one eye on my turntable revolving. I’m watching, not listening to music, because when you own an ancient record deck, it’s what you do. Watch and wait. For it to come up to speed, for the motor to warm to it’s task, for the sun to drop behind the block opposite and touch the platter with that peculiar light that you’ve decided analogue needs. Or, and this is more likely, you wait for something to g o horribly wrong, and then reach for your box of gold plated tools, recommended by Analogue Addicts Anonymous and delivered in a plain brown wrapper in the dead of the night, in order to take it all apart again and find the source of the latest wobble, grinding noise or squeak. And they said listening to music was fun!

I started listening to vinyl seriously about thirty years ago, with some kind of Philips deck that looked, in my youthful opinion, terrific. I started to buy records, both singles and LPs, frequenting small record boutiques, spending my hours searching through deletions and imports, spending what little money I had discovering new tunes and talents. In those days it was West Coast singer-songwriters such as James Taylor, and little known British psychedelic bands with names like Caravan and Camel. Yes, I discovered Steely Dan as well, but West Coast music was my real love. Now it’s jazz, and almost only jazz, but I still have the oldies stacked up around our tiny Vienna room. I did promise my better half that I’d thin them out and get rid of the many I have no intention of listening to anytime soon. I’d put them on some hard disk or other, add them to a server, and then ignore them all over again. And maybe it will happen. Maybe. One fine day.

I’ve moved on from the Philips, sadly. First downgrading to a shiny Eastern beast, and then to real hi-fi with a Rega Planer 2. Everyone should own a Rega 2 at some time, and preferably the old style with wooden surround , glass platter and R200 arm. If you can find one in good condition and at a decent price it’s a great buy. Simple, understated, and sounds good. I was a Rega fan, a disciple, and I soon passed the 2 to a friend and became the proud owner of a Planer 3, which is one of the wonders of the audio world. I had mine for twenty-five years and miss it still, even though it’s gone to a good home. I now have its big brother, or perhaps that should that be little brother, because the P25 with RB600 arm is so neat and wife friendly. I should have been happy. It looks, basically, like the 2, sounds better than the 3, and can be spiced up and tweaked for sensible money, if that’s what you want to do. But after two or three years I needed more. Enter idler drive. Enter, eventually, a Thorens TD 124 Mk2.

Now, we already have a TD 150, a kind of baby Linn that is still available for pocket money on ebay and at car boot sales. I bought it for the significant other because her family had owned one when she was growing up. I‘m not sure she listened to much music on it, but she pined for one and we found a decent example one February at the annual Hi-Fi Jumble in Tonbridge, Kent, an event you should try to get to one day. Anyway, the deck runs well, has an ardent following, and hopefully we’ll do a rebuild one day. 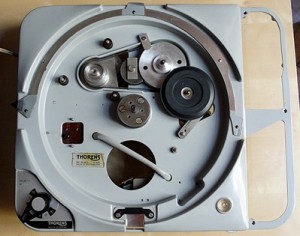 So, one Thorens became two. The 124 cost around $600 from a dealer I discovered on the net. She, not it, was bought in the UK, and carried by me, with some difficulty, to Vienna by train. I don’t recommend it, but needs must. I then added a birch ply plinth from somewhere in Germany, but have yet to get hold of the suspension mushrooms the deck should ideally rest on. She’s in pretty good condition, the motor runs to speed, and I could easily have simply fitted my Rega RB300 and played records. But if you have a classic deck, and the 124 is a classic, you have to learn about the inner workings and do certain little jobs. Change the oil, both main bearing and motor, clean and polish, take bits apart and put back together. Generally fiddle and tweak until you have the very simplest understanding of the mechanics. Every bit of rubber benefits from boiling or soaping, and every surface that you can reach has some dirt or grime to be removed, and it all improves the sound. It must, because everyone on the audio forums says it does!

Is it better than my P25? It’s certainly different. You’ll be pleased to know I’m listening now. The cartridge is a bit of an audio curiosity, a 1980’s Elite EEI 800 with parabolic stylus from Australia. I found it, NOS and perfect, for about $40 on ebay, with replacement styli still available for four times that! The sound through my Micromega amp and Rega Ayla speakers is pretty tasty for an aging system. Full bodied, rhythmic and very listenable. But more importantly the Thorens is musical. It stops you writing and entices you to use your ears when you eventually get round to putting on some vinyl. It may not be the most detailed sound you can find out there, it might not be particularly extended at the top, and a Garrard 401 may have better bass, but it sounds all right. The rumble I’d been warned about doesn’t exist, at least not on my deck and in this system. I listen to a lot of piano, Keith Jarrett and Bill Evans are never far away from my reach, and this deck likes piano. Oh, and Steely Dan. Hey, I like the sounds made by Fagen and Becker! It’s ‘Gaucho’ now. It has a weight that the Rega can’t provide, a rightness that you can just about touch. Occasionally, when I’m not thinking too much, I do get the feeling that I’m at a live show and can hear the band playing as a band and not as a disparate group of individuals in separate sound booths. It’s great, and yet… there’s always a yet or but with hi-fi. 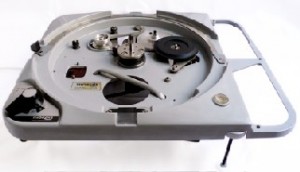 Is it all worth it? The P25 can either be viewed as a plug in and play deck, or as a work in progress. You can upgrade or tweak most parts easily, be it motor and bearing or platter and arm, and for a reasonable amount of your hard earned cash. You can fit an inexpensive moving magnet or unpronounceable imported moving coil, and plug it into baby integrated or tubed goliath. Whatever path you choose you will have a turntable that will give years of listening pleasure without complaint or problems, beyond the occasional belt change. On the other hand, you could take your life in your hands, raid the kids college account, and buy the MGB sports car of the turntable world. Like the MGB she’ll have you smiling and tearing your hair out, and usually at the same time. I should know since we happen to have a black, 1971 MGB by the name of Cleo. Another she. You’ll probably spend most of your nonlistening time surfing the net, signing onto audio forums, and conversing with the many and various fellow sufferers who inhabit such places, as you try to solve the latest invisible problem you’ve decided exists. It’s an endless learning curve, but it’s usually fun. 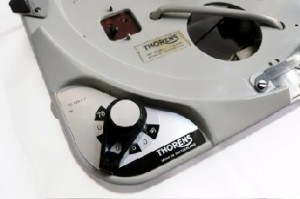 What am I doing? Well, the idea was to sell the P25 and learn to live with the 124, and that’s still what I intend to do. However, I’m sorely tempted to tweak the Rega, just to see what it’s really capable of. And then there’s the TD 150, and an old Connoisseur BD2 I was drawn to on ebay. The only problem is we live in a very small apartment and have finite earnings. Now, we could investigate the possibility of moving to a slightly bigger house and learning to live on stale rolls and curdled milk, but I think my wife has put up with quite enough. Or I could wean myself off the various forums I’ve joined, and then train myself to stop trawling through ebay quite so often. Or I could simply turn off the laptop, put on another record, and listen. I think it’s much the best solution for all concerned.

from aﬀordableaudio, By Kevin Brock