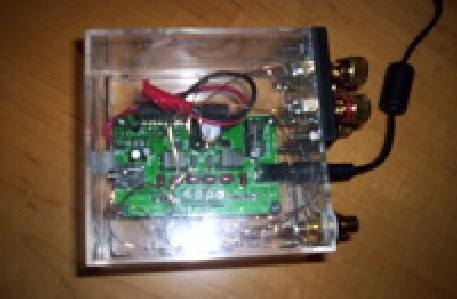 Last month some may have read about my misadventures in the “lets see if we can start an electronic fire” DIY build of the 41Hz Amp6 Basic kit. As I have previously stated, thankfully Jan was kind enough to send me another one. Thanks Jan. I have since learned a number of lessons regarding Jan’s kit:

I managed to buy a different power supply (not a “linear one”), an SMPS (switching mode power supply) from a lap top computer for only a few dollars, and a matching IEC inlet for about the same. I also purchased some respectable binding posts and isolated RCA panel mount jacks for similar money. Outside of the kit itself, total cost about $30. I had some RadioShack “Magnet” wire kicking around which I used internally, and I salvaged a clear acrylic case from the junk pile (that’s what my wife calls it). 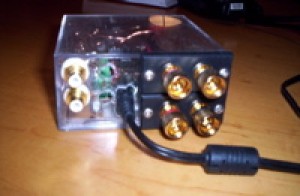 Here’s some photos. Sorry to all who I offend with my hack job construction and my poor photo skills. These show the amp and the SMPS together. Hard to believe the little sucker is only 4″X4″, even harder to believe how good it sounds.

The listening tests have been pretty informal affairs. Rather than a blow-by-blow account of how it sounds, I’ll give a couple of interesting things to consider. My friend John, who has built some really nice custom tube amplifiers, and preamps, and Basszilla Speakers using AER full-rangers, and the super efficient 15″ bass drivers as per the Basszilla plans, thought it was very good. He figured that it should be seriously considered by almost everyone out there considering buying a used amp of any sort.

It was not embarrassed driving the Basszillas, nor was it embarrassed being fed by some excellent digital inputs. He thought that although different, it is certainly more than a hint of what high end sound is. I agree. Comparing the little Amp6 Basic to my McCormack, there are some things it does, that the McCormack doesn’t.

There is something that is just “right” about it. The sound is precise, delicate, it images well. It makes you want to listen to as much music as you can, as quickly as you can. If you don’t see the amp, you could easily be fooled into believing that you are listening to something a LOT more expensive, and without having other items around to compare it to, most people would not be wanting for more. Many have complained that Tripath “T-amps” are weak in the bass. I don’t think they really are. If the Amp6 is typical of the Tamp “genre” it lacks impact in the bass, but presents something that has the effect of the impression of bass. I’m not sure if it is a result of using the SMPS, or what, but I don’t find myself wanting more. I mainly used my 6 Ohm Castle Durham 900 loudspeakers for listening to and did not find the amp to run out of breath in my listening experience. These speakers are 89dB efficient into 6 Ohms, if I recall correctly, but are not of the efficient or super efficient varieties out there. I can only imagine how much better the amp would sound driving a pair of 4 ohm full-rangers.

I’m not done yet with this little guy. I plan on adding a decent power switch, a DTDP “selector switch”, another pair of RCA imputs and a 50K stereo potentiometer, to create a little two source line stage integrated. I’ll report back when I get it all done.
Next up, the Sansui 8080DB receiver that’s sitting in my basement. The tuner doesn’t work–but the amp section does… I’m hoping to find out why the tuner isn’t working. It’s in pretty nice cosmetic condition. Somebody loved this in its past. If I can’t get the tuner portion of this old monster working, I’ll still report on the sonic merits of this “legendary” old beast, used as a integrated amplifier. 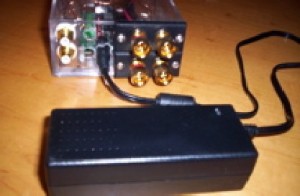 from aﬀordableaudio, By Stew Nelles