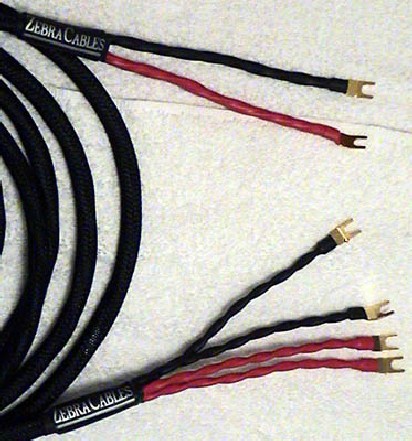 Every once in a while the budding audiophile is treated to a product that sounds so good for the money its like having a Ruth’s Chris Steakhouse Filet for the price of a Denny’s Chicken Fried Steak. I believe that the ZC-SP14DBI is a great cable if you want to give bi-wiring a try without laying down some long green on the really expensive stuff. The thing is that most of the expensive stuff isn’t made any better, but name brand producers have a much higher overhead so the cost is passed on to the consumer. Scott Burns the proprietor of Zebra Cables will whip you up a set of well built custom cables using high quality Belden OFC wire and Vampire connectors. Sure the cable designs are straight forward, nothing too exotic, but just like the girl next door there is a lot to like without having to put up with the high maintenance cost of the debutant we cannot afford.

I have a nice 10 foot set of Alon Black Orpheus bi-wire cables that I have been using for several years with my Alon Lotus Esprit speakers and at $600.00 they are still relatively expensive but when compared to some other high end cables they are a bargain. My previous favorite had been JPW 12 gauge bi-wire cables that I used to bi-wire any of my speakers that had bi-wire capability, not nearly as musical but a $50.00 for a 15 foot pair I still think they sound great. How do both stack up to the $120.00, 10 foot pair of Zebra ZC-SP14DBI cables? Let’s find out!

All Listening for this review took place on my secondary system which consists of an Audio Research SP5 solid State Preamp, Audio Research D52 Solid State Amplifier and my Pro-ject 1.2 Turntable equipped with a Shure M97XE MM cartridge. Presently I am using my bi-wirable Alon Lotus Esprit 3 way speakers in this system because they are so well matched with the Audio Research Electronics.

Out of the box the Zebra’s sounded a little bright, Scott suggested that I break them in for between 50 and 70 hours before doing any critical listening, so I did just that using them in conjunction with my ARC gear and Alon Lotus Esprit speakers for several weeks. After just 10 or 12 hours they had settled in quite nicely, the high end had smoothed out and the sound stage had snapped into focus. After several weeks they had improved further so I began compare them with the Alon Black Orpheus and JPW cables I had on hand.

First up were the JPW cables I auditioned them while listening to a Rhino Records reissue of Elvis Costello’s My Aim Is True. This is a rather bright sounding pop record to begin with, but I wanted to find out whether the accentuated highs would stand out more with one cable or the other. The first track, side one “Welcome tothe working week” has a really recessed, diffuse and raw sound. The recording almost sounds as if it was recorded in a garage. The JPW’s unfortunately accentuated the negative and did nothing to augment the positive energy exhibited by this first Elvis recording. I inserted the Zebra’s into the system and lo and behold the bass came alive. The pace and rhythm of the recording came through! Yes the bright hash that is evident on this raw re-cording was still there however, the music shined through. Elvis’s first hit “Alison” was much more musical and enjoyable while using the Zebras.Next I installed the Alon Black Orpheus cables between the amp and my Alon Lotus Esprits. The difference was noticeable. Where the Zebras seemed to accentuate the highs a bit more the Alon’s tended to sound smoother and perhaps a bit more balanced. One thing that was abundantly clear was that the Zebra’s had very good clarity and bass response, they were definitely head and shoulders above the JPW cables. On this recording however the Alon Black Orpheus cables had a slight edge due to my perception of a slightly more balanced sound.

Next I spun Blowing In From Chicago the Blue Note reissue from Cliff Jordan and John Gilmore. Both of their tenor saxes are prominent and center sage in this early 1957 recording. With the solid backing of Art Blakey on drums and Horace Silver on piano this hard bop album really swings. The Alon Black Orpheus cables again had a smoother presentation but the Zebra ZC-SP14DBI cables had a crisp clear sound that was very revealing I could really all the details presented in the recording. I still slightly preferred the overall sound of the Alon cables but was highly impressed with the Zebras, especially at this price point.

One of my favorite Jazz albums is the Bill Evans Trio Sunday at the Village Vanguard , this excellent 1961 live recording which features bassist Scott La Faro 10 days prior to his death in a traffic accident, has several subtle elements that make it a classic. First of all is the way the way the sound floats through the space, in and around the customers at the Vanguard. When listening on a good system the way recording envelopes the listener he or she feels part of the performance. The chatter, the tinkling back ground sounds of silverware and glasses from patrons listening to the show make it almost real. You can never really hear what people are saying but you want to lean in closer to hear the conversation. This is where the Zebra ZC-SP14DBI cables really shine allowing the inner detail to come through. Although in comparison to the Alons the midrange was a bit reticent and I mean just a bit, the overall quality of these cables is exceptional. On track number one, side two “Alice in Wonderland” Scott La Faro’s bass comes alive you can hear his fingers plucking the strings. Paul Motian’s cymbals shimmer and Bill Evan’s piano explores while it fills in the soundstage. What a fabulous recording and the Zebras really take you there.

The long and short of it is that these cables are giant killers! I have had Tara, Kimber, Monster, Eichmann, Transparent, Audioquest, Alon, DH labs and Discovery cables in my systems. Nothing I have heard at this price point sounds this good, period! I also know that cables to a great degree are system dependant, but if you are looking for a high quality well built cable for bi-wiring at an affordable price the Zebra ZC-SP14DBI cables are a very viable option for you to try. The only caveat would be if you had an extremely bright sounding front end in your system these cables will reveal that weakness and may not be a good match. As much as I like my Alon Black Orpheus cables, these sound nearly as good for one fifth the cost. I would not have spent the money for the Alon cables had I auditioned the Zebras prior to hearing the Alons. Give Scott a call or drop him a line, your cables are waiting!