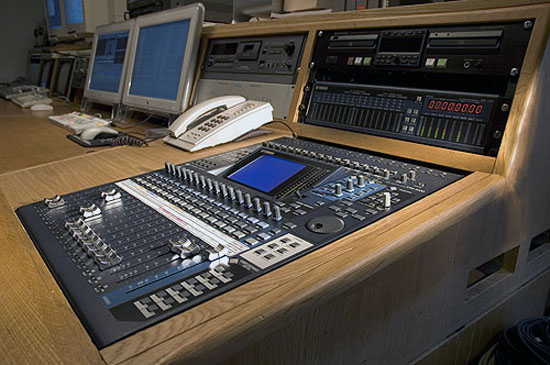 Its truly amazing the amount of audio power that can come in a small package these days. Audio processors of all kinds get smaller, less expensive and more powerful. But despite this encouraging trend, all of these items dont necessarily lead to what is called a professional product, since user interface, I/O and tactile functionality is sometimes forsaken in the name of increased features (most of which arent even used by the every day working professional). That said, the Yamaha DM1000 audio console is one of the rare breed of audio devices that not only packs an unprecedented punch feature-wise, but makes a pro feel really good about using it as well.

Essentially a smaller version of Yamahas larger DM2000, the DM1000 has virtually the same hardware and software features plus a few improvements.

Designed to meet the needs of the audio for film, video, post-production, and broadcast markets where space is at a premium, the DM1000 provides 48 channels of full 96/24 functionality in a really compact (23 D x 8 H x 17 L, 42 pounds), rack mountable package (the first difference from the much larger DM2000). The desk is also more than at home with just about any music or small DAW facility as well. Engineered to seamlessly integrate with DAW packages such as ProTools, Nuendo and Logic Audio, all mixing and processing parameters, transport control, and editing functions of those software packages can be controlled directly from the DM1000 work surface.

The unit is equipped with 20 XLR analog inputs (16 with mic preamps) and 12 analog XLR outputs, called Omni outputs because they can be accessed by any buss or direct out signals. This is another of the differences from the DM2000 in that the Omni outs on the 2000 were on balanced 1/4-inch connectors. All onboard A/D and D/A conversions make use of true 24-bit/96 kHz converters. Two 24-bit/96 kHz compatible mini-YGDAI rear expansion slots also accept a wide range of digital and analog I/O and processing plug-in cards. Cards are available in ADAT, TASCAM, AES/EBU formats, or for extra analog I/O capability. The DM1000 also supports Apogees high performance A/D and D/A cards, and the Waves Y56K effects plug-in card. 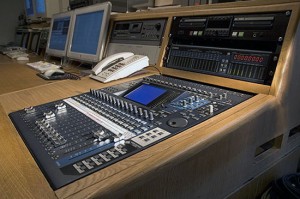 The DM1000 includes a range of 96 kHz-compatible stereo effects with 32-bit internal processing (with many specifically designed for surround), with up to four individual effects processors available for simultaneous use. The 17 100mm motorized channel faders can be instantly bank-switched to control any of the 48 channels, plus Auxiliary, Bus and Remote channels. Additionally, all available inputs, outputs, effects and channel inserts can be assigned to any channel or output via a versatile digital patching system. The eight auxiliary buses can also be patched to any location in the system. An extensive selection of preset effects libraries may be selected and used unmodified, or edited for specific applications, and recalled as needed.

Most of the functions and parameters of the desk are accessed via either dedicated or mulit-function, mulit-press buttons and controlled via Increment/Decrement switches and a large parameter controller and displayed on a nice center section 320 x 240 back-lit LCD display. A set of User Defined keys can also be used either with pre-programmed or custom macros to quickly access frequently used setups or functions.

So lets concentrate on the surround features of the DM1000. First of all, the console has a true multichannel monitoring section with LCRS, 5.1 and 6.1 monitoring modes. The monitor setup page allows the user to send pink noise to each speaker for calibration, set the monitor matrix to check the downmix to stereo, select four modes of bass management or bypass it entirely, and set the attenuation and delay for each channel. One of the cool things thats also different from the DM2000 is that the phase of the subwoofer output can be reversed. Also, the system can be set to a calibrated 85dB that can be accessed via the top panel User Defined Keys.

Each input channel has an extremely extensive supply of surround panning parameters that can accessed from the center display and controlled via a mini joystick. Among these are a surround pan graph that gives a two-dimensional field signifying the current pan position versus the pan position of the built-in joystick.

There are also seven trajectory patterns that determine how the surround pan moves when you operate the paand an automated pan pattern. Also available are LFE level set, divergence, and stereo channel link.
The User Defined Keys on the lower right of the console allow the user to easily call up or control their favorite parameters, but the section comes with several pre-programmed banks. The top-most bank is programmed for surround control, allowing the user to set the output to an 85dB reference point, bypass bass management, and mute any or all of the output channels. This allows for very quick surround monitor parameter access and eliminates the need to flip through the display pages.

The vast majority of consoles of any size or price have a somewhat incomplete surround monitoring section, but not the DM1000. As you would expect, the Control Room Monitor pot controls the LCRS, 5.1 or 6.1 output channels depending upon the mode, and two buttons labeled Buss and Slot determine the program source, either listening to the console surround buss, or from 1 of 2 expander slots returning from a recorder or DAW.

The manual is maybe the most comprehensive of any console in the below $50k price range. Even though its huge, its mostly easy to read and a breeze to find any information needed.

The DM1000 takes about the same amount of time to get used to as just about any large format analog desk, and in my opinion, a lot less time than other digital desks. Its pretty intuitive in that you can be on the air within an hour or so (providing all goes well with interfacing), and comfortably getting around even the deepest paramters within half a day (of course, your mileage may vary depending upon your familiarity with digital products).

Unlike many digital desks on the market, the DM1000 really has a sonic personality thats closer to what wed expect from an analog console. The equalizers are sensitive and musical. Many dig desks require massive EQ addition before you can hear something, but the DM1000 responds like analog; 2dB sounds like 2dB, and, if added to the top end of a source, you can really hear things open up. Where a few years ago digital dynamics where mostly unusable, the DM1000s dynamics are extremely smooth sounding, and once again, behave almost in an analog manner. And the convertors sound great, just about eliminating the need for anything outboard except in the most extreme audiophile situations (and even then…). Suffice it to say, youre gonna like the way it sounds!

The Yamaha DM1000 is an excellent sounding, easy to operate console thats small enough to use in situations where space is at a premium, yet has enough features and power to accomplish just about any task. Highly recommended!