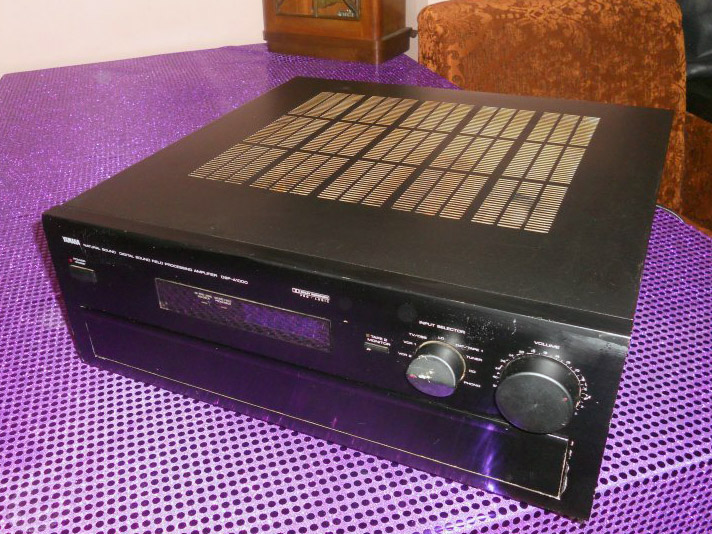 The Yamaha A1000 integrated amp was their top model from 1982-1984, and offered almost all of the flexibility and performance of separates at a very attractive price. The fact that I still use it daily 25 years later speaks volumes for its build quality and durability*. In today’s market, an integrated amp with this level of performance would cost $2,000 or more.

The A1000 starts off sporting a very robust power supply with lots of headroom. There are two beefy capacitors per channel of 33,000 and 22,000 microFarads respectively. The amplifier class is switchable between class AB and Auto Class A / class AB, where the amplifier operates in class A until the output reaches 10 watts. To deal with the added heat generated by class A operation, there is a huge aluminum heat sink that runs down the middle front-to-back and which also serves to separate and isolate the preamp and power amp sections. The Yamaha also contains circuitry called Zero Distortion Rule, which I believe to be a feedback network of some kind. Finally, there is a Direct button which bypasses the tone controls, loudness circuit and high filter to reduce noise and distortion.

There are line level inputs for a tuner, “DAD” (digital audio disc), aux and two complete tape monitors with bidirectional dubbing. Many modern components lack a phono input of any kind but the A1000 has two! Phono 1 is switchable between moving magnet and moving coil circuits, while phono 2 is strictly for moving magnet cartridges. There are four different load impedence/capacitance settings for the moving magnet option, allowing precise matching with the phono cartridge being used. The input jacks for the two phonos are gold plated for corrosion resistance. 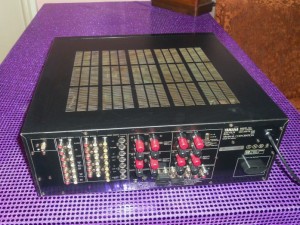 The secondary functions and the headphone jack are hidden behind a fold-down door. With the door closed, the only knob visible on the front panel is the large volume knob which is graduated in 5 dB intervals.

There are two shortcomings in using the A1000: first, there is no remote control (that didn’t become standard until the early nineties); second, the binding post connectors for speaker pairs A & B have the ends covered so that you cannot use banana plugs of any kind – you can only use bare or tinned wire, pin connectors or spade lugs. These are annoying but hardly fatal flaws.

For the frugal music lover or audiophile an integrated amp is often the ideal, cost-effective solution, yet here in America the integrated amp has been the ugly stepchild in the marketplace behind the lowly receiver and the highbuck alternative of separates. An integrated amp usually (but not always) has better circuit design, better parts quality and more flexibility and useful features than a receiver and in that regard the Yamaha is outstanding. Aside from the two shortcomings noted above (preamp/power amp jumpers would have been nice had they been included, too) it’s hard to imagine any contingency that Yamaha hasn’t thought of. Stereo/mono switch? Yep. Muting button? Check. Dubbing in either direction between the two tape monitors? Got it.

Using the A1000 has been a delight. The amp is so clean and quiet that I’ve never found any advantage to using the class A function (the considerable amount of heat generated does come in handy as a space heater during our infamous Chicago winters, though!), but I do notice a slight improvement using the Direct switch to bypass the tone controls and loudness circuit. If you have small speakers that are bass-shy, the A1000 does have the variable loudness control that Yamaha pioneered and that they still use today.

A high-powered, high current amplifier seems to extend the low bass limit of your speakers and in that regard the A1000 is definitely a muscle amp. With music (or movies) that contain genuine low bass there is a bottom heft that seems to extend down to the earth’s very core, especially if your speakers are full range, although the effect was there with a pair of Paradigm Atom mini speakers too. The A1000 doesn’t have a high damping factor spec, so I attribute this effect to the beefy power supply and generous headroom.

The Yamaha does quiet music equally well: it loves female vocalists like Eva Cassidy, Joni Mitchell, Alison Krauss or Mary Chapin Carpenter. When a vocal becomes glassy or strident it doesn’t hide the fact, but it doesn’t accentuate it, either. The Yamaha is smoooth and forgiving but probably not the last word on transient quickness or detail retrieval.That’s alright, though – I’ll take an easy to listen to amplifier any dayover one that accentuates every wart and hiccup.

The A1000 remains the biggest bargain I’ve ever spent my audio dollars on. Its combination of power, features and versatility are hard to beat without spending 3 or 4 times as much. Although it’s a fairly rare model today, I have seen a couple on eBay that sold for under $200. What a steal! When I had mine apart to clean it up and defudge the controls, I decided to have some fun: I painted the top cover a bright cherry red to give it a little pizazz. I call it my Testa Rosa. Nowhere is it written that audio gear has to look drab to perform well. If you can find an A1000 in good shape, buy it!