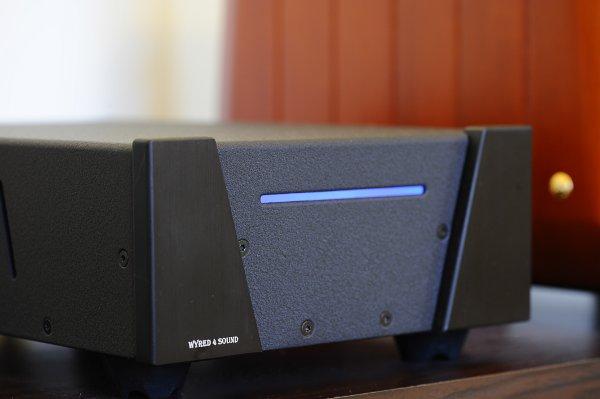 A consensus is a relatively rare thing among audiophiles. Every now and then, reviewers actually agree about a given product. For example, the latest Magico (Model 6) speakers seem to be universally adored. Personally, I find that rather boring. Sure, I would happily take delivery on a pair, but as an audio journalist, reviewing such a product is not particularly interesting. The price tag alone ($160K!) means that review better be a rave! Anything short of that would be a huge disappointment.

In contrast, I find products that are both controversial and affordable to be very interesting. The new line of Wyred-4-Sound amplifiers meets both criteria nicely. By high-end standards, they are certainly affordable. At the bottom of their range, the ST-250 stereo amplifier delivers 125WPC into 8 ohms, with a retail price of $999 USD. For twice the money ($1999 USD), you can 4.5x as much power, 570 WPC! The current monoblock amplifiers offer 250 WPC, priced at $899/each. The dollar/watt ratio is impressive, all throughout the line. Even more appealing than that, the amps use the same Class-D switching module (the B&O Ice module) as many much more expensive products, such as those made my Jeff Rowland Design Group, Bel Canto, Red Dragon Audio, H2O audio, Acoustic Reality…and the list goes on.

The story seems deceptively simple. You have a company (Cullen Circuits, who have been manufacturing Class-D amplifiers since 1990) marketing a new and innovative technology (their own modification / implementation of the B&O ICE module) using a minimal dealer network to minimize distribution costs, building the amplifiers in relatively modest looking, inexpensive enclosures, resulting in a bargain for high end shoppers. That is a great formula for success, but it ignores one critical factor. How do the products actually sound?

If you do a little homework searching the reviews and the discussion forum posts, you will quickly feel even more confused than you were before doing your research. Some people love these amps, and others hate them. I was hardpressed to find anything in between. Sure, most of the formal product reviews are extremely positive (2 out of 3 are raves, as far as I can tell), but it is relatively rare to read a negative product review. For those, readers usually must read the audio forums, where posters can rant and rave in anonymity, should they so choose. What do people on the forums have to say about the Wyred 4 Sound amps? There sure seem to be some satisfied owners out there, but plenty of “haters” too. 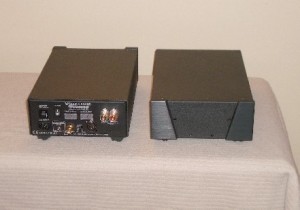 Having read all I could find about these Wyred 4 Sound (I will use the abbreviation W4S from now on) amplifiers, the only thing I had yet to try was the amplifiers themselves. I settled on the middle-range monoblocks, the 250 WPC SX-500’s ($899 USD/each), because they seemed to be a good match for my system and none of the other audio review publications had published reviews on them. Thanks to the extremely helpful and knowledgeable John Cook of Black-Sand Audio, I received a demo pair for a 30-day audition period.

Almost every picture I have seen of a W4S product has featured a two-tone sliver/black case. One thing most reviewers/users actually seem to agree on is that the casework is…well…ugly at worst, utilitarian at best. Thankfully, my demo pair was black on black, which actually looks better than the silver/black version, and also looks better in person than it does in the pictures. The other “in person” contrast I noted was that the monoblock was actually bigger and heavier in person than it appeared on paper or on the computer screen. They are still downright diminutive compared to the other monoblocks I had on-hand (see the pictures), but they have a reasonably substantial look and feel. From what I understand, W4S has come up with new casework in response to feedback. Don’t expect it to look like a Jeff Rowland amplifier, but it should look better than the first version!

I paired the SX-500 monoblocks with my review equipment, consisting of a Logitech Duet transport, Beresford TD-1752 DAC, Kimber Silver Streak and Z-squared AU/AU interconnects, Jungson JA-2 preamp, QED Genesis Silver Spiral speaker cables, Paradigm PS-1000 v4 subwoofers (two), Usher Be-718 speakers, and three different amplifiers, two of which were also pairs of monoblocks. Right out of the box, the brand new W4S monos sounded…well…like a hospital: Cold and sterile. I had heard this before from brand new, cold products, and was not particularly worried. Better to leave them running for a week or so, then listen again. After some break-in/burn-in time, things improved considerably, but I still found the dynamics (both micro-and macro-dynamics) to be quite flat, and the midrange was certainly not warm. I would even go so far to as to say it was cold. Even the soundstage was quite recessed and illdefined. I was confused. Many people have raved about these amplifiers (including reviewers I normally trust and agree with), and surely they were getting better sound than I was from the monoblocks. After a couple of weeks of nearly full-time operation, they should have been broken-in by now. I started exchanging e-mails with John Cook of BlackSand Audio again, seeking advice. He was quite responsive and helpful, even suggesting that I try the RCA inputs instead of the XLRs, as one of his customers (also running Usher speakers) preferred the sound that way. Knowing full well that XLR connections are supposed to sound better, this was confusing advice, but I heeded it anyway. Did it help? Yes, although it also required the use of different interconnects (switching to Kimber Silver Streak). Still underwhelmed by the sound some days later, I got desperate and tried something crazy. I removed the power conditioner. Wow, that made a huge difference. It really seemed to breathe life into the amplifiers, and although their basic sonic character did not change, the vividness of the dynamics and soundstage improved markedly. I switched back to a balanced connection with my preamp using a very fine interconnect (Z-squared Au/Au) and finally I was convinced that they were performing as they should, and the critical comparisons began.

I started by comparing the W4S SX-500s to my Jungson WG-200 poweramp, which is a class A/B stereo design producing 200 WPC into 8 ohms. It runs quite hot (heavily biased towards Class-A operation) and it is very transparent and revealing of variations in tone. While the SX-500 is capable of making very large noises, it is relatively polite dynamically. In many ways, this amp was the opposite of the SX-500’s. While the Jungson has a lush midrange and smooth highs, but not the best bass control (although considerable quantity of bass and slam), the SX-500’s had much better bass control, but a more lean sounding midrange and less smoothness in the highs. Normally, I listen to a lot recordings with piano and female vocals, which is a combination that the Jungson WG-200 quite likes. In contrast, with the W4S monos, I found myself more drawn to acoustic guitar and male vocals, including a quite a bit of country music. Perhaps this shift was related to the Jungson’s better handling of tonal complexities and higher frequencies, compared to the W4S’s proficiency with bass control and lower frequencies in general.

Compared to my Kavent P-1100 tube hybrid monoblocks, these differences were even more obvious. This tube hybrid design is less powerful (100 WPC into 8 ohms) than the Jungson WG-200, but it has an even more textured and warm midrange (classic tube virtues), but they also give up a bit more in bass pitch definition and slam. This comparison accentuated the SX-500’s leaner midrange and treble, but also made their bass control sound even more impressive.

Lastly, I compared the SX-500 monoblocks to my reference monoblocks, Xindak XA-8800MNE’s. These are 200 WPC monos that run very hot (the first 60 WPC is pure Class-A), and they offer the best amplification I have heard anywhere. They are huge in every way – large, heavy, and sonically quite imposing. They produce a very full and lush sound, and somehow project a wide soundstage that you can feel as the music presses you back into your seat. Linear power at that scale is an addictive thing, and compared to the SX-500’s, the Xindak’s actually felt considerably more powerful to me, despite their specifications indicating otherwise. I could not find a recording that I preferred through the SX-500’s the imaging, bass control, midrange presence and soundstage were always more convincing through the bigger and considerably more expensive ($3300/pair) Xindaks.

However, Class-D amps have hidden costs – costs that hardly anyone seems willing to talk about. Sure sure, they have great benefits too. They are very energy efficient, as they hardly squander any of the energy they consume on heat. In fact, many users leave them powered on all the time (although that also squanders much if not all of the benefit of energy efficiency if you ask me). They are small, light, and easy to move around. As a reviewer who is constantly swapping gear around, having monoblocks that I could lift with one hand would be great! The small and lightweight nature of these products makes them cheaper to make, cheaper to ship,

and cheaper to run. But there is one way in which they are actually much more expensive than conventional design in my opinion, they eat cheap cables for breakfast. Class-D amps are extremely sensitive to cabling (both power cables and interconnects). You need clean power, good power cords, and good interconnects to get the best out of these amps. Even if you don’t normally invest much money or effort into cabling (a category I fall into, I must confess), make the effort if you commit to a class-D amp, or you won’t know what you are missing, because Class-D designs are so much more sensitive to cabling. Personally, I used these monos exclusively with BlackSand Audio’s Violet power cords. I tried several different interconnects, both RCA and XLR. I had the best results using a Z-squared gold alloy XLR cable, but given that the MSRP of these cables is almost $1500, and matching that with a $900 monoblock ($1800 for the pair) is not a particularly realistic combination. White Zombie Audio SilverPointZero XLR’s sounded quite good too, and they cost a much more reasonable $188 for a 1m pair.

The word “clinical” is often thrown around when describing audio components and it is often meant as an insult. From what I can gather, others use the term to describe a very well controlled sound that is on the “lean” end of the lush/ lean spectrum. The component does not add any superfluous or even euphonic elements to the signal, but it does faithfully reproduce detail. Tonal complexities might not be as obvious with “clinical “ gear, but details are. If I had to summarize these monoblocks with a single word, “clinical” is the word I would use. Is that an insult? That depends on what you value most in sound reproduction, what your partnering equipment is, and what sort of music you listen to. Clinical can actually fit the bill quite nicely. There are plenty of high-end brands that seem to make a perfectly good living marketing “clinical” gear.

I opened this review by alerting you to the fact that W4S products are controversial. Which side am I on? I am actually somewhere in the middle. Is this the amplification for you? Like most questions in audio, the correct answer is “it depends”. The sonic character of the W4S certainly has its virtues, such as bass control and transparency. You pay a price for these virtues though, such as a leaner sound and more recessed midrange, but even these compromises must be weighed in light of the cost of the amps. This is still a very economical and flexible way to acquire some serious audiophile-grade power!

from aﬀordableaudio, By Lorin Elias