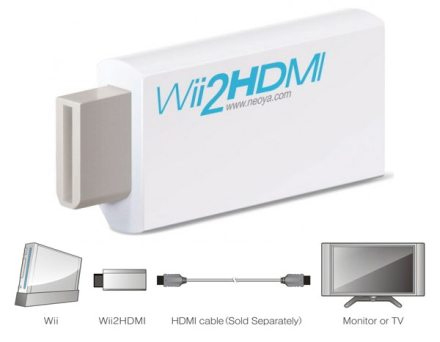 Not too long ago, Netflix released a version of their software for Nintendo’s popular home video gaming console entitled the Wii. Well, if you’ll make note, the Wii has no HD functionality whatsoever, featuring the option for only component or composite connections. But what if you want to hook your Wii up and all you have left on your TV is an HDMI port? Normally, you’d be out of luck as Nintendo does not supply an HDMI adapter for the Wii.

Luckily, a company by the name of Neoya has ust announced their Wii2HDMI adapter. Of course, this adapter won’t magically bump your Wii’s video output to HD quality, but it will give you the option to stop using component or composite and make the switch to HDMI.