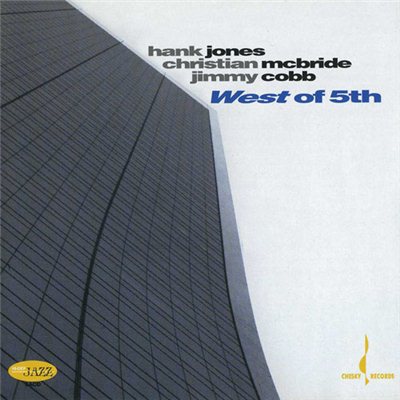 West of 5th is the second album in the New York Sessions SACD series that features Jimmy Cobb and Christian McBride. They previously starred on the New York Time SACD from Chesky released this September (Chesky SACD 314). On West of 5th, Cobb and McBride are joined by veteran jazz pianist Hank Jones as they perform a number of classics by Wes Montgomery, Kurt Weill, Thad Jones, Frank Loesser, Charlie Parker, Billy Strayhorn , Frankie Laine and Victor Young along with a composition by Jimmy Cobb.

Chesky describes the new SACD as

“an exciting recording that features pianist Hank Jones, bassist Christian McBride and drummer Jimmy Cobb. Listeners are offered a unique opportunity to hear two esteemed veterans playing with a stellar young musician. Jones and Cobb first rose to fame performing with talents as diverse as Miles Davis, Coleman Hawkins, Hot Lips Page and others. McBride, meanwhile, only came to prominence in the 1990s and although he is less than half the age of Jones and Cobb, the trio’s interaction on West of 5th could not be more fluid. West of 5th is the fifth of seven titles to be released as part of Chesky’s The New York Sessions series. This collection features the greatest jazz musicians of today recorded with Chesky Records’ state-of-the-art technology.”

The music on West of 5th is very elegant and beautifully recorded jazz by a talented trio. The Surround Sound SACD recording focuses attention on the players in the front channels with just a slight touch of ambient sound in the surround channels. The piano of Hank Jones is well recorded and the jazz is well played and mellow. It’s a nice reminder of what a well done High Resolution recording can be all about.

Mysterious Shorter is a tribute album to Jazz saxophone player and composer Wayne Shorter. Over the years, Shorter played with Maynard Ferguson, Art Blakey, Miles Davis, Herbie Hancock and was a founding member of Weather Report. Mysterious Shorter features 8 of his compositions performed by an all star jazz band in what Chesky calls

“An investigation and exploration of the groove music of Mr. Wayne Shorter.”

“the funky stuff, the happy tines, which lend themselves well to the organ and are fun to play. With these guys I was able to take liberties and rearrange. Everybody knew the music, they’ve all got the groove inside them.”

Mysterious Shorter was recorded at St. Peter’s Episcopal Church in New York City on April 19, 2006. The album was Produced by Bob Belden & David Chesky with Musical Arrangements by Bob Belden. It was Recorded, Edited and Mastered by Nicholas Prout with Assistant Engineer and Session Coordinator Rick Eckerle, Project Coordinator Theodore Thimou and Production Assistants Lisa Herschfield and Nicholas Oddy. The liner notes also thank Michal Jurewicz at Mytek Digital for the loan of a converter used on the recording. The Hybrid Super Audio CD was made by Sony DADC at their Hybrid SACD replication line in Terre Haute, Indiana.

Listening to the Mysterious Shorter SACD in Surround Sound, you’ll discover some interesting takes on Shorter’s music. As Belden suggests in the liner notes, they’ve taken some of his upbeat compositions and arranged them to take advantage of the Organ, Guitar, Sax and Trumpet in the group. The SACD also does a fine job of reproducing the performances. It definitely provides a “you are there” level of performance and Chesky’s minimalist recording approach with no compression and overdubs offers a nice change of pace from the very compressed sounds we all too often hear in many of today’s conventional audio disc releases. Weather Report and Jazz fans will enjoy this one.

Upcoming Chesky Surround Sound Super Audio CD
Chesky plans to finish out their New York Sessions SACD releases for this year in late November. At that time, Super Audio CD and Jazz fans will be treated to the release of the album Personal Favorites by Fred Hersch in Surround Sound SACD. (The album Tribecca Blues that was also slated for release by Chesky in November has been bumped to a release date in early 2007). 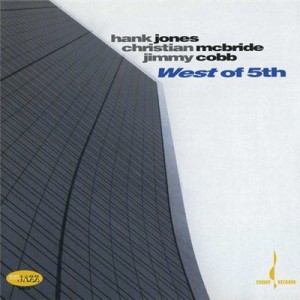