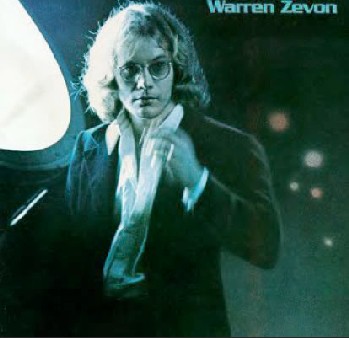 I was introduced to Warren Zevon when I was in college and his 1978 album Excitable Boy was released. Notwithstanding a few tracks that to this day I can’t stand (Nighttime in the Switching Yard and Veracruz come to mind), the album caught my fancy in a big way: The offbeat lyrics, superb tunecrafting and marvelous arrangements and performances instantly attracted. To this day, it remains one of the only rock albums that my parents, myself and my kids all like.

It took me a few more years to discover this 1976 Elektra/ Asylum release, and what a shame that is, because this is an album of greater depth and even better performances than his follow-up album. Suddenly I discovered who wrote all those marvelous songs that Linda Ronstadt sang. It clicked.

Every song on this album is a treat. The roster of performers who joined Zevon for this recording reads like a Who’s Who of seventies (and earlier) rock royalty: Jackson Browne, JD Souther, Lindsey Buckingham, Stevie (credited as “Stephanie”) Nicks, Phil Everly, Glenn Frey, Don Henley, Bonnie Raitt, Carl Wilson. Less well-known, perhaps, but no less important are the superb session musicians who appear on the album, including Waddy Wachtel, Bob Glaub and Larry Zack. The album was produced by Jackson Browne.

The album is one of the Warner Brothers/Rhino reissues, this one mastered from the original master tapes by Kevin Gray at AcousTech Mastering (but not alongside Steve Hoffman, who has worked with Gray on some of the other titles in the series). The album sounds very nice; for years my only copy of this was a tape I made from a friend’s LP back in the seventies. I subsequently came into possession of an original pressing. This sound of this reissue beats my cassette handily, and is noticeably (but not dramatically) better than the vintage vinyl.

The vinyl emerged from the innersleeve flat and clean. The surfaces were quiet. The only misstep was a label that was applied slightly off-center. I can attest, however, that this had no impact on the sound.

The album cover is a fine reproduction of the original, fabricated of a nice quality matte card stock. There is an insert that contains the lyrics and a very soft-focus period photographic portrait of Zevon…shades of Elton John. The quality of the printing on the insert is nothing to write home about.

Zevon was a formidable artist, and is sorely missed. Warren Zevon is his masterpiece, notwithstanding that his other albums had real merit. This was an excellent choice for a high-quality remaster, and Rhino has done well with this one. Highly recommended.