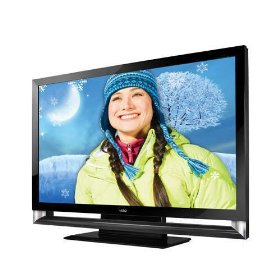 Every time I see a Vizio VF550M LCD HDTV  on display somewhere I can’t help but catch my breath in sheer astonishment.  The clarity!  The sheer size of it!  The enormity of the price tag!

In all honesty, this is a magnificent television set.  It’s a full fifty-five inch diagonal (technically it’s slightly smaller, but the Mark One Eyeball can’t tell the difference.  We’re talking three, four tenths of an inch shy.) set that comes in full 1080p resolution, with a panoply of slots.  Seriously, check out this rundown: five HDMI slots, two component jacks, one PC slot, two AV slots, and, as though that weren’t enough, a PC slot.  It’s also got a special kind of audio technology in there called TruVolume, which regulates the volume coming out of the speakers at a continuous level.  You know how when you’re watching TV, especially at the local level, and you’re watching a commercial for, say, your local library?  It’s nice and calm and they’ve got some quiet instrumental going on in the background.  You’re almost being lulled to sleep when ALL OF A SUDDEN COMES AN AD FOR BIG LOU LEMON’S USED CAR EMPORIUM!  WE GOT CARS!  BIG CARS! BAD CARS!  COME ON DOWN TO BIG LOU’S!

Yeah, like that.  TruVolume dials down the volume on Lou’s frantic pitch so that you’re not jolted out of your wakeful reverie.  And as someone who’s nearly fallen out of a chair following one such occasion, I wish TruVolume came on more sets.

But the price…frankly, it should almost come with more slots and be larger and offer an option to change the channel by mental telepathy.  They’re asking almost sixteen hundred bucks for that rig.  I know, it’s huge, it’s beautiful, the resolution is positively uncanny but the price is so absolutely mammoth that it’s almost not a good value.  It packs so much into one system that it should be pricey, but sixteen hundred dollars for once system?  Especially these days, that’s probably too much.