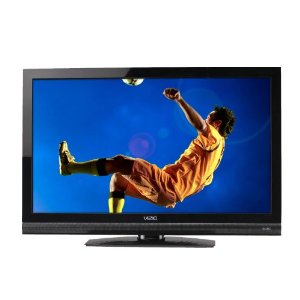 Vizio is one of the big names in home theater products, folks, so it really shouldn’t surprise anyone that they make regular appearances with us. But they’re not always a great value, as we’ll discover today looking at the Vizio E421VA.

The Vizio E421VA is a forty two inch 1080p LCD television that offers a 120 Hz refresh rate, Digital Ambient Lighting systems that automatically adjust brightness based on conditions in the room, two ten watt speakers backed up with SRS TruSurround HD and SRS TruVolume, four HDMI inputs, one component input, one composite input, a PC input, a USB port and a headphone jack.

While the picture looks good, and the sound is solid (ten watt speakers backed up by SRS TruSurround will always do a great job with your sound quality), the inputs are sufficient in number for your newer gear, but slim for your older equipment. And by itself, none of this would really be a problem until you consider things from a value perspective and take a look at the price tag.

The folks out at Amazon want five hundred forty six bucks for this one. That’s almost a quarter off retail–a good deal, and no mistake there–but the problem is that we just looked at a Toshiba yesterday that was only slightly smaller that offered quite a bit more for only sixty dollars more. Frankly, that doesn’t speak well to value here.

While the Vizio E421VA is a pretty good model of television in its own right, it takes so much damage in terms of value that it doesn’t look all that good against its competition. Still, in isolation, it will do a fair job…just not as well as some we’ve seen.