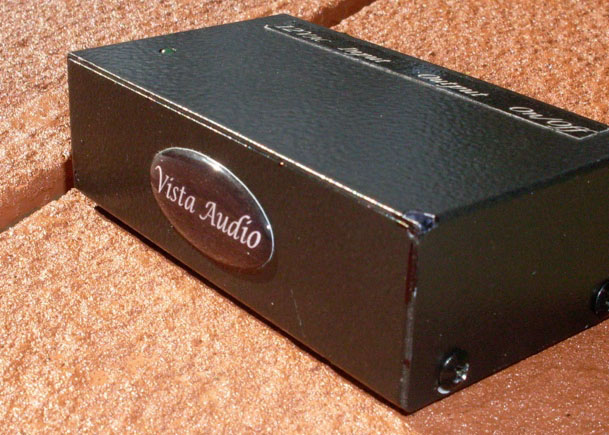 Some of the best pieces of audio gear at the various price ranges have a tendency to stay almost invisible. The item blends in so well to the system that one easily forgets that it’s even hooked up. For the past several months I’ve had the opportunity to spend time indulging in the stealthy abilities of the $299 Vista Audio Phono-1 preamplifier. 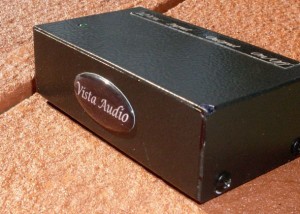 Part of the initial charm of the Phono-1’s small stature (it’s just slightly thicker than the original iPod) as designer Boris Sasic points out in his on-­‐line essay on designing the Phone-­1 the necessity to keep size to a minimum thus allowing for close placement with other equipment with short interconnects. The case is of a metal gauge thick enough to feel both substantial as well as strong enough not to ﬂex. Its compactness allowed me to attach the Phono-1 to the vertical skirt on the back of the turntable stand I use with a minimal amount of Velcro. For most the standard placement comes with two nice touches on the top of the casing. First being the power LED, and second is the input/ output, ground and power switch labels.

It’s a real savior for those of us with middle-­aged eyes. The front face is adorned by only the Vista Audio label. The back panel from left to right holds the POWER toggle switch, right and left input and output RCA jacks, brass ground wire connection screw and the socket for the outboard wall wort. The sides each hold two screws, and ﬁnally four rubber feet are attached to the base. 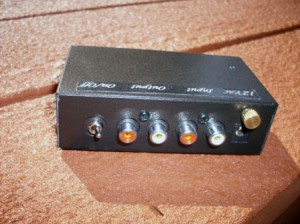 Before touring the interior of the Phono-­‐1 (as well as a handful of times since) I read thru the design essay. As fellow staffer and engineer Dan Nielsen pointed out, Boris loves the engineering process. Goals and objectives are written down, parts researched, design style choices made, and RIAA parameters applied. Only then is the sample model constructed, tested, adjusted, tested, adjusted and tested more, etc., etc.

Under the hood the layout of the components is logical and ﬁvngs are solid. Solder points are thick, but not sloppy. The RCA input/output jacks are screwed into the metal sightly; no ﬂex or give can be see or felt. This is a personal pet peeve of mine, as I have previously had to spend money on repairing non-anchored jacks. In the end one sees a logical, clean, and responsible design. 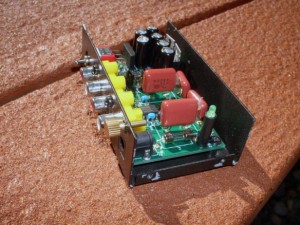 The Phono-­1 can be order in either MM or MC setup depending upon your cartridge. Boris offers the ability to setup the Phono-­1 to specifically match your cartridge’s load and gain setting. The Class A design using the direct-­‐ coupled approach the capacitors stay out of the circuit path thus allowing for an ultra-­‐wide bandwidth and low noise ﬂoor. This passive design achieves a solid RIAA tracking error number of just 0.12db

Since the Phono-1 is priced in the budget range ﬁrst comparisons were made using the Rotel RA-1520 integrated amplifier with a built-in phono stage. The Phono-1 was plugged into the AUX input of the RA-1520 powering a pair of Verity Audio Finns. The source for the entire review was the Rega RP1 with the Ortofon Super OM40 cartridge. Upon ﬁrst setup I did detect some noise coming from the Phono-1 that didn’t appear with the Rotel. The issue was solved after moving the Phono-1 wall wort to its own outlet socket and keeping the power wire away from other cords.

The Rotel internal phono is quite respectable for a built-in unit, but the Vista Audio Phono-1 bests it across the board. The differences come about in the separation of similar sounding instruments and vocals of a similar nature. Dan Fogelberg’s notorious breathy vocals occasionally blended with a fuzzy synthesizer with the Rotel. Listening to the same songs from his Netherlands album the Phono-1 suffered no such lapses. The differences were clear with every song. The bass punch in the song “Scarecrows Dreams” that came across a bit lacking in the Rotel, had a fully presentation with the Phono-1. As more music by a variety of artists was played, it became quite obvious that the Phono-1 improvement over the built-in Rotel phono was truly similar to that of peeling oﬀ a layer or two of an onion. More detail from top to bottom as well as spaciousness was being presented.

Connecting the Phono-1 to my reference Sim Audio Moon i7 integrated amp where usually the highly regarded Moon LP5.3 does its business could sound like a big come down in performance. Instead the Phono-1 performed admirably. It peeled off another thick layer of veiled sonics from what I heard with the Rotel amp. Spinning Rickie Lee Jones debut album is always a treat and the Phono-1 didn’t disappoint. The track “Young Blood” is a great example of why vinyl touches so many audio fanatic souls; every instrument has space, resolution and warmth. A tough song for budget phono stages to play without muddying up the vocals is Jones’ “Easy Money” as her trademark singing blends syllables together. The Phono-1 manages to keep clear the necessary details and treat the listener to subtleties that make the album so beguiling.

One of my favorite test tracks comes from the same album, “Danny’s All Star Joint” as it contains one of my favorite bass guitar recordings in rock/pop music. It’s a strong pace that easily can wash out other instruments, which at times accomplished on the Rotel. Not so with the Phono-1, the horn section keep its own space and tangy detail. Finally, in “Coolsville” the bass tom hits came out with enough detail to signal to this former drummer, which hits were outside the center of the surface. 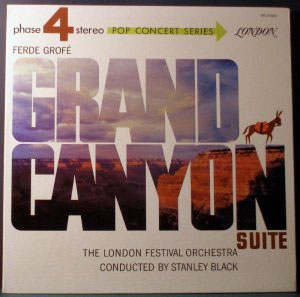 Wanting to challenge the Vista Audio to more complex arrangements, I pulled out a prized 1965 London Phase 4 Stereo copy of Aaron Copeland’s Grand Canyon Suite conducted by Ferde Grofe. One of the things that makes this work special is the usage and solos of thin-reeded instruments the bassoon and oboe. The second movement “Painted Desert” treats the listener to both. The bassoon is full and rich that one can easily picture cascading across the canyon. The oboe, an instrument that my sister painfully haunted the family during her ﬁrst year of playing and later entranced us, provided the kind of clarity and mid range beauty that rarely is heard.

The Phono-1 did show its limitations with the Grand Canyon Suite, the last minute or so of “Sunrise” the strings dissolved into a hard edge, something that is much less apparent when played thru the reference Moon LP5.3. This same limitation reared up while listening to the springy “On the Trail” movement. The clarinet and French horn while pleasant lacked the richness even when played thru my Vista Audio i34 integrated tube amp. Positioning and separation also narrowed in comparison to the LP5.3, but at 20% of the price of the Moon, the Phono-1 performs quite well. The full orchestra attack at the end of “On the Trail” is presented in all its dynamic boldness. One of the subtle niceties of the Phono-1 is the way it handles the increasing loudness of orchestra instruments in “Sunset” without turning shrill. This was something the Rotel struggled to handle. The plucking of the strings and the ﬂute were both particularly resolving.

Good audio begins with honest quality engineering and the Vista Audio Phono-1 is a ﬁne example that such quality need not be budget busting. By following goals ahead of price point, Boris Sasic has brought a worthy product to the market. It does what it is actually capable of doing very well, and that means the basics of replicating phonographic sound. In doing so the Phono-1 avoids the pitfalls that so many budget products ﬁnd, namely trying to be everything at a price that makes such ideals impossible. The Vista Audio Phono-1 keeps it simple and straightforward. Because of that it’s a winner that any budget-conscious audiophile will appreciate and ﬁnd worthy in their system.