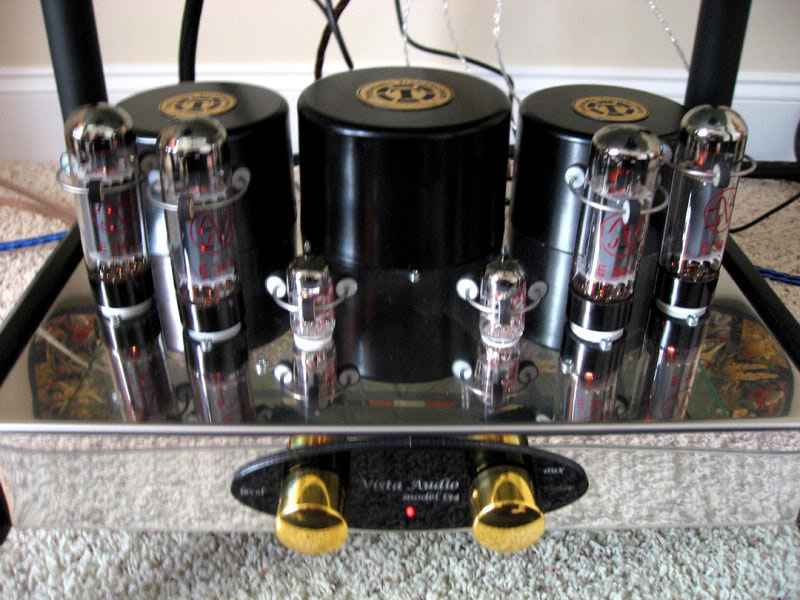 When I was a kid I remember going down to main street with my grandfather to the appliance store. Inside was a vacuum tube testing machine, there he would plug in a couple of tubes from the console television in an attempt to be handy and save my parents a few dollars. To his credit and my thrill he pulled up a chair to the machine and had me stand on the cushion. From that point I was able to assist him in picking the proper socket for each tube. Had this occurred today I can imagine the horror of tube fanatics as we handled each tube without gloves. The most exciting part was watching the tubes glow after pushing the “test” button.

Some thirty years later with the help of the Vista Audio i34 integrated amplifier I have rediscovered my fascination for vacuum tubes. I’ve always been a solid state audio fan, but over the years I would occasionally wonder about a piece of tube gear in an advertisement. But it never went past a fleeting wishful moment…..until now. The Vista Audio i34 has definitely opened my eyes.

My training as an engineer is a regular reminder that rock-solid simple designs have very few variations. In that regard the i34 follows a pretty standard architecture. Using a combination of six tubes (two ECC832’s, and four E34L’s) and three large transformers manufactured by Traformatic of Serbia, the i34 is a salute to beauty by way of simplicity.

The tubes are pair matched, with their boxes labeled for proper positioning. The tubes fit snuggly and without any movement of the socket base with each tube standing in perfect vertical alignment. The rest of the case had the same solid, tight, well-constructed feel. The volume and source knobs have a nice stiff feel that exudes quality. The polished steel facing lends itself as a pleasant visual contrast to the glass and flat black transformers. 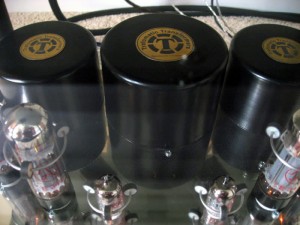 The back of the i34 is as straightforward as the front with the three RCA inputs AUX, TUNER, CD. In the middle are the binding posts with a choice of 4 or 8 Ohm for the positive lead. Finally, along the right edge is the POWER toggle switch and the power cord receptacle.

I’ve been reviewing speakers recently and on the side shopping for a new reference set within my budget. One pair I’ve been pleased with recently is the Aperion 6T towers. With my large 16×24 great room with vaulted ceilings I desire a speaker that can truly fill the space. At 88db and 8 Ohm efficiency, they had no problem being powered by the
35wpc of the i34.

Just about every review discusses or mentions the audio warmth of tubes. Being a solid state guy I’ve always believed that the better the measurement, the more pleasing the sound. I now want to add in a disclaimer that tube “warmth” is not only a viable term, but in addition the slightly lower measurements are not a bad thing. The i34 is just plain comfortable on the ears. Instruments have a more natural resonance to them than what I am used to. The various instruments that cover the treble section of music lack the extra sharpness that can fatigue my ears after a long spell. 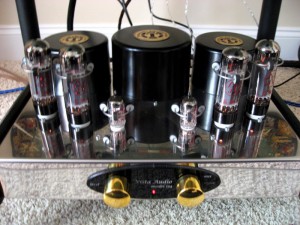 Lately, I’ve been listening to a fair amount of Keith Jarrett piano work. Normally, an hour a day is plenty with the CD’s I have. The top octave keys can become a bit harsh on the ears during intense passages. But with the i34, I found myself wanting to play a second disc of his recordings in a sitting. The listening fatigue wasn’t creeping up on me after 40 minutes or so. The E34L tubes lightly round the top frequencies, this is quite a change from my experience with the Adcom GFA 5400 amplifier, where sharpness is a strength.

Turning to some classic rock, Fleetwood Mac Rumors cd is one that I still marvel at the quality of the dynamics to this day. To sound good it needs an amp that can deliver both subtlety and repeated mule kicks in the same song. “Go Your Own Way” with the bass drum and tom-tom hits balance against the harmonies of Nicks and McVie. The punch when listening to the track at over 80db is quite impressive. The i34 has some solid muscle to deliver the blow. 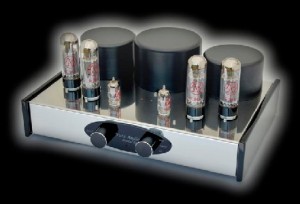 The beauty of Christine McVie’s elegant love song “Songbird” the i34 does great justice in placing her voice in front of the piano, yet the keystrokes have plenty of space for a wonderful soundstage. The Adcom amp has a tendency leave the piano flatter and lacking in decay. The same holds true for the terrific track “The Chain”. The acoustic string work of Lindsey Buckingham is clearly defined against the electric guitar. This separation is something that I have read is somewhat harder for budget tube amps with their naturally fatter sonic character. 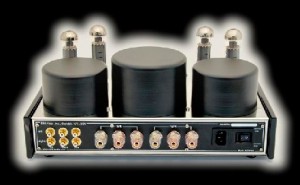 The i34 never exhibited any under weight on the music, bass instruments didn’t go boom and rattle my chest any more than the Adcom amp. Yet I never felt wanting, when paired with the Aperion 6T’s that I was missing out on the bottom end. Listening to male vocals a hint of chestiness is apparent, but more from being in a small room singing for friends next to fireplace.

As I have been discovering, the best budget gear doesn’t try to cover every possible sonic item. Instead, the designer focuses on a smaller list and executes them to the best possible result. In this regard the Vista Audio i34 is an absolute winner. What it does do, it nails with excellent execution. The best way to describe the i34 is to think of a female model that actually eats carbohydrates, full sounding but svelt. When the time and budget comes for me to add vacuum tube gear to my system the i34 will definitely be a finalist.

Many thanks for spending time with the i34 and for an excellent review. I am glad that you find 35W of power sufficient with 88dB efficient speakers in your rather large room having “enough power” is one of the main concerns audiophiles have when considering move from solid state to vacuum tube technology. And not nearly as critical as people with few hundred Watts of installed power may think 🙂 We at Vista-Audio absolutely agree with you that specifications are important, but not always paramount in judging an amplifier’s performance. The i34 has very respectable 0.2% THD but, had we decided to chase numbers, we could have designed a solid state amplifier with many times lower figure. We opted instead for simplicity and elegance that tube technology provides: high linearity, euphonic nature of inherent distortions, straightforward signal path, protection and isolation provided by the output transformers, etc. In the end, the combination of design decisions, parts quality and a bit of luck resulted in a product that your review so accurately describes and I am thankful for that. Boris Sasic