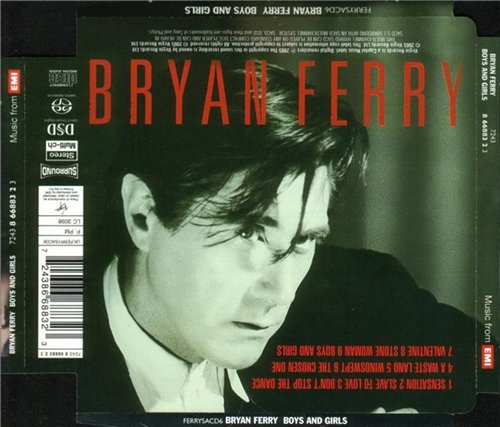 The Hybrid Multichannel Surround Sound SACD of Boys and Girls is now available for purchase at music stores in the U.S. including Media Play. It is also available at U.S. web sites that carry Super Audio CD discs including Acoustic Sounds, Elusive Disc and Music Direct. The new Surround Sound SACD carries a list price of $18.98.

When Tommy was released, critics were split between those who thought the album was a masterpiece, the beginnings of a new genre, and those that felt it was “sick” and exploitative because of its dark theme. The album was banned by the BBC and certain U.S. radio stations. Ultimately, the album became a huge commercial success, as did The Who’s frequent live performances of the rock opera in the following years, elevating The Who to a new level of prestige and international stardom.
Although Tommy is conventionally described as a rock opera, author and Who historian Richard Barnes points out that this definition is not strictly correct, since Tommy does not utilise the classic operatic formulae of staging, scenery, acting and recitative. According to Barnes, Tommy could be more accurately described as a “rock cantata” or a “rock song cycle”.
Musically, the original album is a complex set of pop-rock arrangements, generally based upon Townshend’s acoustic guitar and built up with many overdubs by the four members of the band using many instruments, including bass, electric and acoustic guitars, piano, organ, drum kit, gong, timpani, trumpet, French horn, three-part vocal harmonies and occasional doubling on vocal solos. Despite this instrumental richness the sound tends to be very “stark”, especially in comparison to the band’s later work. Many of the instruments only appear intermittently — the ten-minute “Underture” features a single toot on the horn — and when overdubbed many of the instruments are mixed at low levels that require careful listening to notice. Townshend mixes fingerpicking in with his trademark power chords and fat riffs, and in some delicate moments his guitar sounds almost like a harpsichord. Moon’s drumming is controlled with a few dramatic moments; Entwistle’s bass provides support and effectively takes the instrumental lead in several cuts. Daltrey swaggers as lead vocalist, but shares that role with the others on a surprising number of tracks. Townshend’s later interest in synthesizers is foreshadowed by the use of taped sounds played in reverse to give a whistling, chirping sound on “Amazing Journey.”
“Amazing Journey” can be interpreted as the central pivot of Tommy, since its lyrics are essential to understanding what the opera is about (beyond the facile story line). “Go to the Mirror” is the climax of the opera both musically and dramatically; tradition holds that when the band were touring the show live the audiences would spontaneously stand up during “Go to the Mirror” and remain standing until the end—listening in silence, unlike the customary behavior of Who fans. “We’re Not Gonna Take It / See Me, Feel Me / Listening to You” is the denouement, with its ambiguous return to the earlier state of the story reinforced in concert by returning to the riff from “Overture” and “Go to the Mirror” at the very end rather than the long fade from the studio recording. Various themes are repeated in different songs in order to give the opera a coherent feel.
The tracks “Overture”, “Pinball Wizard”, “I’m Free”, and the “See Me, Feel Me / Listening to You” reprise were released as singles and got a decent amount of airplay. “Pinball Wizard” reached the top twenty in the U.S. and the top five in the UK, and was a hit for Elton John in 1975/76. “See Me, Feel Me / Listening To You” landed high in the top twenty in the U.S. and “I’m Free” reached the top forty. The tracks “Overture”, “Christmas”, “I’m Free”, and “See Me Feel Me” were released on an EP in late 1970. The “Overture” was also covered by a band called The Assembled Multitude and received a lot of airplay. Tommy was inducted into the Grammy Hall of Fame in 1998.
The child abuse that features so prominently in the story caused a good deal of outcry when it was first released. It has often been claimed that the basic idea of the Tommy story was lifted from The Pretty Things’ 1968 concept album S.F. Sorrow, and Townshend himself later admitted that he listened to the Pretty Things LP extensively and that it was a major inspiration for Tommy. Steve Marriott also claimed that some musical elements in Tommy were “borrowed” from the music of The Small Faces. Christian rock pioneer Larry Norman, in his official biography, states that “Pete Townshend credited Larry’s own rock-opera, The Epic, for inspiring the rock-opera, Tommy, recorded by The Who”. Notwithstanding the numerous outside influences, several structural precedents for Tommy exist in Townshend’s own work, including “Glow Girl” (196, “Rael” (1967), and the sectional work “A Quick One While He’s Away” (1966).
A couple of years before the album came out Pete Townshend explained his ideas and apparently actually thought out some of the structure of the opera during a famous Rolling Stone interview. John Entwistle claimed years after the release that he had never actually listened to the album because he was so sick of it after the endless takes and re-takes.